The cattle market however experienced a 25pc slump with the average price received dropping to $2.66/kg liveweight, down from it’s record peak of $3.22/kg in the 2016/17 financial year (see graph below). In economic benchmarking, the cash and non-cash components of running a business are included in the analysis.

“This, when combined with the drought conditions and increasing input costs, has equated to some numbers we’ve never seen in ProfitProbe,” Mr McLean said.

The Top 20pc numbers in the 2018 report are the results achieved by the top 20pc businesses as ranked by the highest return on asset (ROA – i.e. what are the characteristics of the most profitable businesses).

The Top 20pc achieved a 4.2pc ROA for the financial year.

The Molotov cocktail of factors has seen the average return on assets equal 0.0pc (yes, zero). It is worth noting that ROA has declined for four years in a row now, despite the cattle market reaching its peak during the 2016/17 FY.

Mr McLean said this emphasised the low relationship between profit and price received.

He said some people would read this and not agree for two reasons:

“First, they don’t like the negative result. If the average result is zero, then that means a lot of businesses returned a negative result.  I’ve had a lot people disagree with how we value the inventory this year.  I didn’t get any where near as much feedback when the cattle market went up and it boosted results though.  We’ve used the same valuation philosophy since the 90s.

“Secondly, they may feel as though things went pretty well as there could have been some free cash flow.  This may well have been the case however it’s important to separate cash flow from management accounting, both of which are important to know.

“If you want to analyse your business without the un-controllable influences of market prices, then cost of production (COP) the best number in my opinion.  Despite the ROA results, COP data shows us that the average producer has tightened up the belt in the last few years and improved the relationship between production and costs.  The Top2 0pc COP was $1.18/kg compared to the average of $1.58/kg.  These results only include direct costs and overhead costs to run the business and exclude interest which was, on average, an additional $0.35/kg produced. “COP is an indicator of our ability to withstand market variation.  Financial success doesn’t come from how much we produce, what we get paid or how miserly we are.  It comes from the DIFFERENCE between what the market pays us and the COP (costs divided by production).  If you went through your business and considered every cost line item as an investment, what return on investment are you getting from each one? Could it be better?

“Whilst COP has declined, I am concerned about the $1.58/kg average, as it simply doesn’t provide a big enough margin to achieve most businesses goals (e.g. growth, expansion, re-investment, other investments, debt reduction, succession, management transition etc).”

A number that previous readers will have seen is the expense ratio.  This is the relationship between the economic value of production (gross product) and the total costs (direct costs + overhead costs + interest costs). If it is over 100% then we’ve spent more than we’ve earned.  In economic terms, the average producer was over 100% for most of the 2000’s.  The increase in inventory diluted the results for a few years from 2014/15 to 2016/17.   However, the increase in COP during this period means that once the inventory value stopped going up (remember it went down a lot for trade cattle), the expense ratio has jumped up to 151pc on average and 69pc for the Top20pc. It is the total overhead costs on a per LSU (large stock unit) basis.

The Top 20pc businesses have kept this relationship in check (which is one of the reasons why they are in the Top20 pc).  However, for the average beef producer, overheads per LSU has increased for eight years in a row, averaging an annual increase of 11pc. “Where to from here?  There are some sobering numbers here.  I interpret them as presenting some great opportunities for those operators who know what is going on in their business and are ready to take advantage of these opportunities when they present themselves.

“Firstly, know what the numbers are for your business.  There is not silver bullet and you need to know your current reality.  It isn’t too late to analyse your business via Profit Probe.

“If you’ve already done that, then make sure you know what the key numbers you need to focus on are (use the help videos and documents available plus your advisor).   What are your strengths and weaknesses (we all have them)?  Build on those strengths and address your weaknesses.  Don’t look at these numbers above and think they apply directly to your business.  Know where your deadwood is and cut it out!

“Ask yourself what return on investment you get from each of your costs.  Have any un-necessary costs crept in? If you had to, or wanted to, what costs could be cut out?

“What does this year look like?  If you had an enterprise that made a loss last year, is it going to do it again?  If it is, then what are you going to do about it?

“Finally, check that your current business model is appropriate for the current reality of market conditions.  If we look at the variation in EYCI over the past 20 years, we spent nearly 15 years in a 100c/kg bracket of 300-400.  The variation is now much greater. 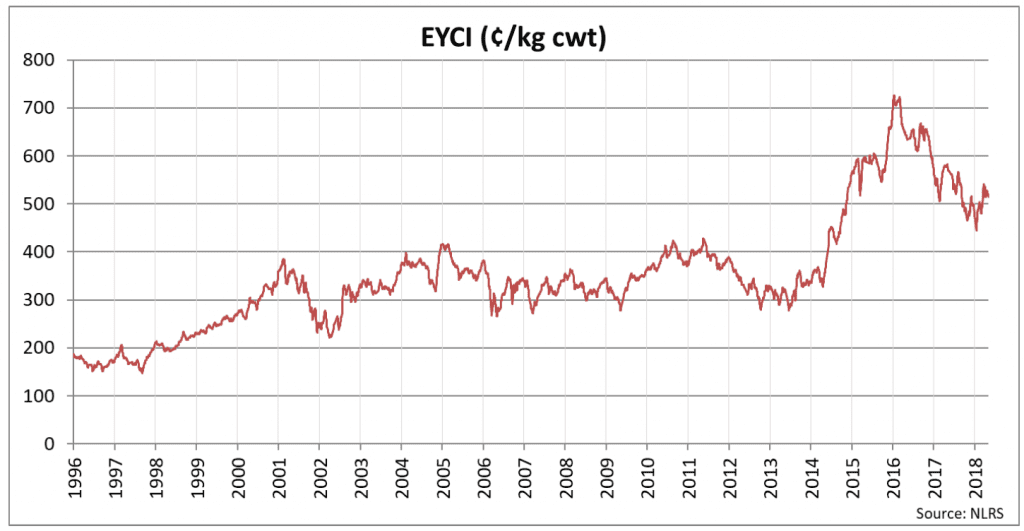 “What will it do in the future? Nobody can predict this with confidence.  My suggestion is that you consider your business operating model with respect to each enterprises ability to be profitable with the assumption of large variability.”

To discuss benchmarking and analysing your business, contact the RCS team on 1800 356 004, email info@rcsaustralia.com.au, or visit this page of their website.