EASIER and more convenient protection of cattle against Bovine Respiratory Disease (BRD) is encouraging beef producers to adopt pre-vaccination strategies in young cattle, prior to or at weaning.

One of the challenges to this point in managing BRD in cattle with existing vaccine products has been the need for two vaccination treatments, some weeks apart, to provide full protection.

But Zoetis’s Bovi-Shield MH-One vaccine – now available as an over-the-counter purchase from vets and rural resellers, for use directly by producers  – requires just a single vaccination.

The convenience of a single, rapid-response treatment is part of the reason why some producers are adopting Bovi-Shield MH-One vaccination at weaning, rather than waiting until cattle are about to be consigned to the feedlot.

The impact of respiratory disease in feedlots is well documented, accounting for 84pc of sickness in feedyards, with a productivity cost calculated to be worth at least $50 million a year. What is less well understood is the impact the disease can have on-farm in young cattle in the period from weaning to feedlot entry. That’s partly because of the difficulty in measuring feed intake in paddock environments, compared with the feedlot, researchers say.

Over 30pc of animals with BRD go undetected, based on results from abattoir lung scoring at slaughter.

While BRD vaccination has traditionally taken place soon before consignment to the feedlot, there’s a growing trend towards administering the vaccine a lot earlier, before or during weaning, to increase the benefit of protection at the weaner/grower stage.

Near Harden on the NSW southwest slopes, large-scale backgrounder Argyle Foods Pastoral is routinely treating bought cattle this year with Bovi-Shield MH-One, for added protection against the production impacts of BRD.

Following a large equity injection last year, the business is in a substantial growth phase, aiming to reach annual turnover of 12,000 cattle next year, with 10,000 of those turned off as grassfed or grain-assisted slaughter cattle within the company’s own brand programs, and the remainder sold as feeders to commercial feedyards, or custom-fed.

Most of Argyle’s steer and heifer purchases are British and British crosses, around 300-350kg liveweight at arrival depending on the season, purchased out of saleyards or via the paddock. In an average year the cattle exit the paddocks after 4-6 months at 500-550kg liveweight (grain assisted) for the company’s own kill, or 450-500kg for feeders.

As a large-scale buyer of young cattle from across southern and central NSW and into Victoria, pre-vaccination for BRD is now a fundamental part of Argyle Pastoral’s animal health regime.

“Every young animal that arrives on our properties undergoes an induction process, and as of mid-year, that now includes a routine vaccination with Bovi-Shield MH-One,” Mr Heggaton said.

“Around June this year we had a really significant increase in the number of cattle going onto grain, and the numbers we were buying and turning off. Given the very dry season, dusty conditions, increased use of supplementation, and a lot of co-mingling of mobs going on due to the circumstances, we were starting to see some respiratory issues among backgrounders,” he said.

“The writing was on the wall: I could see a perfect storm brewing for a big BRD impact on the cattle this year. We spoke to major feedlot customers, vet consultants and others and decided to adopt a Bovi-Shield vaccination program.”

The primary reason for choosing Bovi-Shield MH-One was the simplicity and convenience of a one-shot vaccination program, instead of having to re-treat with a second shot some weeks later to build immunity.

Argyle’s 10,000 acre backgrounding/growing operation sees young bought cattle go through a holding/induction period for a week or so, and then go out onto paddocks. Basically over a period of 120-150 days, the cattle work their way back through a series of paddocks towards the yards, ready to go to slaughter or feedlot.

“They might only return to the yards twice, or perhaps three times, over that 150 days, so it is really critical for us to get that BRD protection in a single application. And we certainly do not want to have to re-vaccinate later, in order to reach optimum coverage,” Mr Heggaton said.

“The convenience of a single treatment, while still getting the desired outcomes in terms of rapid and comprehensive herd protection, was the big reason why we took up Bovi-Shield,” he said.

Despite the prevailing conditions, Argyle Pastoral has not seen any significant respiratory issues since the program started.

Mr Heggaton said it made a lot of sense to vaccinate early, rather than just prior to feedlot entry, to maximise the benefit of the investment into BRD protection at farm level, as well as in the feedlot phase.

“We think adding protection on-farm makes good sense. In our case, there’s a long list of stress factors in play with purchased young cattle – they are trucked to the saleyards; go through the saleyard process; trucked back here; co-mingled with strangers; and introduced to a new environment,” he said.

“For a small cost and a ten-second injection when they are in the crush at induction, it makes a lot of financial sense to greatly reduce the productivity losses caused by BRD.”

“We think even breeder operations down to a couple of hundred head will eventually look at the benefits that a single-shot vaccination program using Bovi-Shield can offer them, and make decisions to vaccinate.”

Mr Heggaton said he had spoken to major lotfeeders that Argyle sold cattle to, who had told him they would track performance of Bovi-Shield MH-One-vaccinated feeders.

“The early feedback to date suggests it is delivering protection in the feedlot similar to existing two-shot vaccination programs. Once they have some solid data behind them, they will make decisions about pre-vaccination price incentives, like those that currently exist for two-shot programs,” he said.

Mr Heggaton said he thought there were a lot of cattle producers out there who were still probably unaware that there is a single-shot BRD vaccine now available.

“The two-shot process does scare some people away, because of the extra time, labour and cost involved.”

“But the beauty of this Bovi-Shield product is that you can greatly reduce the impact of respiratory disease, and do it simply and easily with a single treatment.”

It remains important to also look at reducingthe impact of stressors as well. Together with vaccination, this  can deliver much quicker and more consistent weight gain.

“Since we started the program, our cattle are putting on weight and we’re hitting our average daily gain targets earlier, after induction, than what we have previously”, Mr Heggaton said.

For the month of July, Argyle Foods Pastoral pulled just two grower cattle out that were exhibiting BRD symptoms. “Two out of 3000 head is a pretty good result, I would have thought. The adoption of Bovi-Shield vaccination is obviously not the only reason, but it is a significant factor in the equation, we believe.”

“It’s something we will continue to use as a central part of our animal health program in future. It’s easy; it’s cost-effective; and it achieves the desired results in protection.”

Another early user of the Bovi-Shield MH-One product has been Minnamurra Pastoral Co based at Coolah, which in a typical year produces 4000-5000 Angus x Speckle Park weaners for sale, mostly to lotfeeders.

Manager Dennis Power said due to the drought stressors and heightened risk of BRD in young cattle this year he had recently vaccinated weaners with Bovi-Shield MH-One. The company also used the one-shot vaccine on entries in this year’s RNA Paddock to Palate performance classes, fed at Grassdale feedlot. 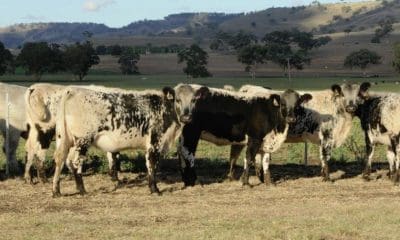 “With the impact of drought, we early-weaned our March-April drop calves this year and are virtually feeding them in the yards – and we see young cattle like this as a higher risk for BRD this year,” he said.

“At the moment, those vaccinated weaners look good, and show no signs of runny noses,” Mr Power said.

In his case, decisions about BRD vaccination would likely be made from year to year, based on seasonal circumstances and other factors.

“If it’s a tougher season, where young cattle are fed and they have to be held longer rather than being pushed out into a paddock early, we think it makes good financial sense,” he said.

“You don’t have to lose too many calves, or suffer a weight gain performance setback, to pay for the vaccine. And the financial impact from BRD on farm is a lot more dramatic than what many people realise, especially during tough years like this one.”

The obvious advantage in a single-shot BRD treatment was the cost and labour saving in not having to re-treat a second time, avoiding additional handling of stock, Mr Power said.

“Particularly in weaning young cattle, I see a huge advantage in BRD protection. It’s important not to have setbacks at that young age. If you can keep them going forward, there is a big productivity advantage, not only in reduced mortalities, but also better weight gain performance.”

With most of Minnamurra’s turnoff ending up in domestic or EU-eligible feedlot programs where demand for pre-vaccination against BRD prior to despatch is becoming more common, it made sense to extend that vaccination protection backwards into weaner cattle while they were growing out on the company properties at Coolah, Coonabarabran and Merriwa.

“This way we can share in the benefit,” Mr Power said.

Zoetis technical services manager Dr Sally Oswin said she believed Bovi-Shield MH-One had an important role to play in both the feedlot and backgrounding sectors of the beef industry.

It is the only vaccine on the market that provides protection from bacterial pneumonia – caused by Mannheimia haemolytica (MH) – in cattle with one injection, removing the need to handle and treat cattle twice, and the added cost of a second dose.

“And it works fast, providing protection within seven days, at the time of greatest challenge, and protecting for at least 17 weeks,” she said.

“The beautiful thing about Bovi-Shield MH-One is that once the animal is vaccinated, protection is provided within a week.. When dealing with a traditional two-dose vaccine program, operators sometimes just don’t have time to get those cattle immunised the second time, for the period they are at risk.”

Other MH vaccines sold in Australia require a two-dose regime, at least two weeks apart. According to Zoetis, registered protection in those products only occurs a period of days to weeks after the second dose is administered, and there is no registered protection after a single dose of those vaccines, leaving cattle susceptible to infection.

Zoetis’s Bovi-Shield MH-One has been independently proven to be effective against Australian strains of the MH bacteria, arguably the most aggressive causal agent contributing to BRD.

Dr Oswin said the reason Bovi-Shield MH-One worked as a single-dose treatment was that unlike traditional vaccines that come in a ready-to-use formulation, Bovi-shield MH-One comes in two parts which are easily mixed on the day of use: a freeze-dried antigen, and a unique, proprietary liquid adjuvant, which delivers maximum, single dose potency when combined before use.

The delivery technology is substantially different to existing vaccines, she said.

“There’s a real need in the industry to have a single-shot vaccine to prevent BRD. Without it, those cattle would probably need to be treated with antibiotics, as well as the inevitable production setback from sickness, even if they respond to treatment. It’s always better to be able to prevent disease rather than have to treat it once it’s occurred,” she said.