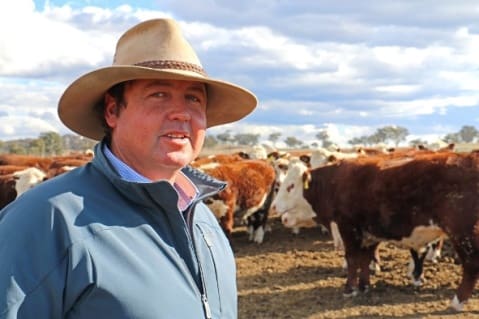 The steers were part of a large-scale sire progeny test conducted by Herefords Australia with funding from Meat and Livestock Australia Donor Company under the Beef Information Nucleus (BIN) program.

The steers’ scores ranged from 58 to 69, with an industry benchmark being 60.5 for grainfed (no HGP) cattle.

Mr McDonald said processors were now beginning to buy carcases for their beef brands based on MSA index scores, with one commercial company’s ‘gold’ brand requiring a score above 62, and ‘silver’, above 58.

“A big portion of the cohort steers would have made the gold brand and the rest silver,’’ he said.

“Sooner or later, beef brands and price grids will be based on the MSA index (eating quality) rather than arbitrary criteria such as marbling,’’ Mr McDonald said.

Up to 50 young Hereford bulls of high genetic merit are being progeny tested across four different cohorts using 12 co-operator herds from Queensland to South Australia.

The program has been extended to include a fourth cohort, at a projected cost of around $500,000.

“This project will help us accelerate our rate of genetic improvement of the breed, identify a sire’s progeny expressing performance and carcase quality, and improve the robustness, accuracy and amount of Breedplan data,” Mr McKew said.

“The collection of high quality DNA samples will allow us to move to single-step analysis and put genetic information directly into Breedplan.’’ 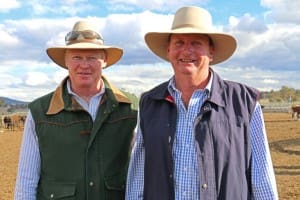 “The project aimed to obtain data suitable for validation of existing and emerging genetic technologies, for use in updating genetic parameters in Hereford Breedplan,’’ he said.

Collaboration would take place with other breed progeny tests for the creation and exchange of data to enable the development of across-breed EBVs.’

Mr Taylor said a sample was taken from cube rolls on each carcase for testing at a meat science laboratory for shear force, intra-muscular fat percentage, compression and cooking loss.

Cohort three, comprising 120 steers, is due to be processed on August 27, and 114 weaner steers on feed at the University of New England’s Tullimba feedlot.

The fourth cohort was spread over three joinings of 900 cows, with the first 150 calves born in autumn. Spring-drop calves are expected soon and the final drop due next autumn.

The vast majority have been MSA boning group two and three, quite an exceptional result in terms of eating quality,’’ Mr Taylor said.

The 25 sires from cohort one and two now have accurate carcase EBVs and dollar indexes based on actual carcase data, delivering an excellent data set for testing genomic predictions further down the track.

In cohort one, the stand-out sires for eye muscle area and dollar indexes for supermarket, grassfed steer, grainfed and EU was Wirruna Daffy D1 and Allendale Waterhouse D1.

“If we can make these elite sires available to industry, then it will be a great step forward for the breed – increasing genetic gain is what it’s all about,’’ he said.