Satellites and helicopters watch the grass grow at Sundown Valley

Buses arriving at Sundown Pastoral Company for a property tour as part of ALFA’s SmartBeef conference.

THE property showcased as part of this year’s Australian Lot Feeders’ Association annual conference was an apt fit for the chosen theme of ‘SmartBeef’.

The Statham family’s Sundown Pastoral Company at Kingstown west of Armidale in the New England area of NSW is Australia’s largest high performance pasture program, and one of the country’s largest cattle backgrounding operations.

Technology plays a driving role in simplifying management and monitoring pasture and cattle performance to achieve the aim of maximising kilograms of beef produced per hectare.

For many years Sundown Pastoral Company traded cattle, buying, backgrounding and selling tens of thousands of cattle a year, but now solely concentrates on backgrounding cattle for specific customers, including AACo.

The numbers explain the scale: Sundown alone is 44,000 acres, 80 percent of which is improved, high-performance pastures.

It is part of a 92,000 acre conglomerate of properties Sundown owns and/or has responsibility for managing. (Sundown sold nearby properties Paradise and Newstead to Paraway last year but still manages those properties on Paraway’s behalf. The Sundown team also oversees grazing rotations at Gunnee, where Sundown and Mort & Co have a joint venture 10,000 head feedlot, and on the Statham’s farming aggregation Keytah at Moree).

Sundown’s 44,000 acres is divided into 260 paddocks, where 64 mobs of cattle move at any one time through the rotational system.

With such scale can come complexity. A key priority on Sundown is to keep operations as simple as possible. 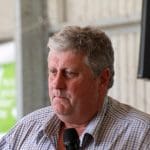 “We try to keep the systems really simple,” general manager Matthew Monk told a 100 strong crowd at the SmartBeef field day at Sundown.

“It is big scale and you can’t be too complex. If it is too complex it is very difficult to run.”

Specialising in backgrounding has removed much of the complexity that came with trading massive numbers of cattle each year.

In those days anywhere from three to 10 B-Double loads arrived and required processing on any given day. The main 4000 head processing yards were often full of cattle, a complicated and difficult workflow to manage.

These days, several B-Doubles roll into Sundown on specified pre-planned days between 4pm and 6pm, delivering between 750 and 1200 weaner steers from northern properties, some 2500km away. Two types of backgrounders are handled at Sundown:

The cattle are rested in the yards overnight, inducted as they would be into a feedlot with animal health treatments in the morning, and moved into a four paddock rotation by mid-afternoon.

Performance data is collected every time cattle come into the yards. At the end of the month an invoice is generated for the backgrounding kilograms gained, which provides monthly cash-flow.

As Mr Monk explained: “Our cattle are well travelled, they come from far North Queensland and the Northern Territory, so we have to make sure when those cattle come here they are performing from day one, not day 30. That is a huge cost to our operation, we get paid on kilos gained, so we can’t afford that downtime.”

Data collection and performance monitoring starts from the ground up, quite literally.

Sundown has 7000 soil data sets across its operation which are updated regularly to determine fertiliser and pasture improvement requirements. Manures and solid fertilisers are applied as required to maintain soils at optimum levels and to replace what has been removed. “We feed the soil to grow the grass to feed the cattle,” the company’s agronomist Nick Jenkins (pictured) explained. “Our number one aim is to get the soil right.”

The pasture system is also very simple, Mr Monk explained: “We have winter active fescue, which covers us for winter, spring and autumn, and we have lucerne for the spring, summer, autumn.”

Each mob is managed within a four-paddock rotation.

A network of laneways runs across all farms to facilitate ease of cattle movement to the automated main processing yards.

A comprehensive spraying program is used to control weeds.

“The concept is you don’t want pasture falling down after five years, you really want to be able to depreciate them over 10 years rather than five,” Mr Monk said.

“When to review your pastures is a critical thing for performance.

“We use the data from the performance of our cattle, the soil tests, our measurement of pasture growth and biomass, and condition of our paddocks.”

Every seven days satellite data from the Pastures from Space program gives Nick a snapshot in time of pasture growth rate, feed on offer, and total accumulated dry matter.

He then uses a two-hour helicopter flight every week over the same precisely mapped transect of each paddock to complement the satellite data with site-specific pasture data.

A remote sensing “Crop Circle” tool attached to the bottom of the helicopter measures the kilos of dry matter per hectare in each paddock.

A Crop Circle sensor is also fitted to a side-by-side vehicle, but the weekly helicopter flight allows Nick to measure an area in two hours that would take about a week to cover using the ground rig. The Crop Circle data from the chopper is used to produce a coloured map showing feed levels within each rotation, which help to determine how long cattle will remain in each cell, and where they will move next.

Cells range in size from 40 to 50 hectares. Reticulated water systems and dams supply every paddock. Trough water is delivered from tank storage of over 1.2 million gallons via more than 300 kilometres of underground pipe.

“The idea of the rotation is to keep cattle on high quality feed the whole time,” Nick said.

“We just adjust the amount of paddocks in each rotation to achieve the stocking density that is required to match the pasture growth rate.” The four paddock rotation in which the field day was held contained 250 cattle with an average weight of 390kg, stocked at a rate of 2.26 steers to the hectare, and consuming a daily feed take of three tonnes per day.

“If we were heavily stocked, we would drop a paddock out of this rotation and bring it back to three paddocks to make sure we utilise that feed on offer.”

The digital data is supported by regular pasture tests to monitor energy and protein levels.

The ideal pasture length to introduce cattle is two to eight inches, Nick said: “The reason it is ideal is because of the quality of the pasture, protein and energy within that.”

Charts presented by Nick showed pasture growth rates can typically drop to about 10kg mid winter, and then rocket by a factor of six to 60kg in spring.

Traditionally growth rates double in the second week in August, and then increase rapidly into spring.

Options when rainfall is lacking include moving cattle to hill country near Kingstown; to add extra paddocks into rotations; to reduce exit weights of cattle, for example by sending cattle off at 400kg instead of 430kg, and/or to limit the inflow of cattle coming in.

Mr Monk said the operation does not buy in feed supplements.

“It is too labour intensive and too costly for our operation, so we are better off managing the cattle, so that is how we set the system up.”

Drones are used at present to monitor water and pasture levels but are not yet crucial to the operation.

Derek Schneider from the University of New England who works closely with the operation on pasture imagery explained: “The day an we can put an optical sensor on a drone and do 84 nautical miles around the 40,000 acres and collect the sort of data we are collecting with the helicopter, then drones will become a lot more useable.

“But at the moment it is just for monitoring, eyes in the sky, and looking at troughs and cattle, and giving management a bit of extra capacity.”

Walk over weighing is another emerging technology being trialed for potential adoption.

“We just have to get it to a manageable, practical system,” Matthew Monk explained.

“At the moment we don’t have the ability to block cattle off water.

“Really the only way we could do it going from paddock to paddock. But we would have to train them to go through that system.” Trials are underway with the CSIRO and NSW DPI using digital GPS-based collars equipped with accelerometers to monitor grazing patterns and feed intake of individual animals.

Sundown Valley was the first purchase into agriculture by Neil Statham, the founder of the R&N Steel Buildings (later Ranbuild which sold to Bluescope Steel in 2004), in 1964.

At the time it comprised15,000 acres of tree-covered hills and valleys. Decades of land and pasture development work, which continued with the acquisition of 13 other nearby farms over time, have transformed the original unproductive country into a 44,000 acre high-performance grass and beef producing powerhouse.

The Statham family has taken the same approach to adopting and implementing technology in their pastoral enterprise as they did in their shed business, as Neil’s son David, Sundown Pastoral Company’s managing director, told the crowd at the SmartBeef field day. 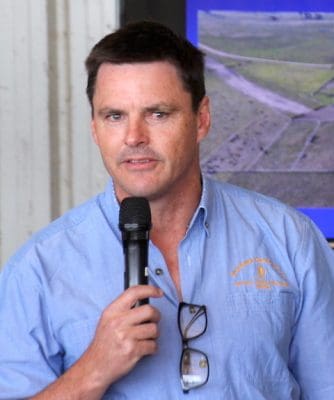 “In the 1990s and early 2000s I was still very heavily involved in the shed business,” David explained.

“My passion for technology came then because we were in a race at the time to computerise and automate the shed business, and whoever got there first was going to win that race.

“That drove us to where we were in Ranbuild and being first over the line in that business.

“So that is where my passion comes from to apply technology in the beef business.

“And I think it is only just starting. You have got single-man drones coming out, virtual fencing.

“I think the next five or 10 years is going to be significant.”

Neil Statham worked as an apprentice boilermaker with BHP in Newcastle, and later as a sales representative with the National Cash Register Company.

He and his wife began pricing steel buildings to farmers and then contracting their manufacture on receipt of orders.

He formed R & N Steel Buildings, which grew and prospered until becoming the premier manufacturer of prefabricated farm buildings in Australia.