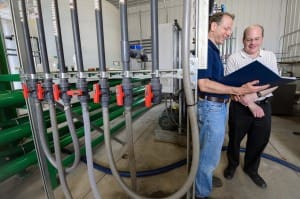 Former MSU Ph.D. student Jim Wallace (l) and faculty member Steve Safferman are part of a team that has developed technology designed to turn manure into useable water. The system also can extract nutrients from the manure that can be used safely as fertiliser.

New technology that can turn cow manure into water clean enough for livestock to drink is set for commercial release later this year.

Ten years ago researchers at Michigan State University started working on a technology that could turn cow manure into clean water and remove elements such as carbon and ammonia to be used as fertilisers.

A few days ago they finally announced their results.

The McLanahan Nutrient Separation System is an anaerobic digester combined with an ultra-filtration system, and an air-stripping and reverse osmosis system that extracts energy and chemicals from cow manure to produce both water that is clean enough for livestock to drink and fertiliser.

The researchers say the system can currently turn 378 litres (100 gallons) of manure into 189 litres (50 gallons) of water, but hope to increase that number to 246 litres of water (65 gallons).

They say the technology will be particularly useful for animal operations in dry regions where water is at a premium.

Steve Safferman, an associate professor of biosystems and agricultural engineering who is working on the project, said the system had value both in conserving resources and protecting the environment, and could also make good financial sense for cattle producers.

“If you have 1000 cows on your operation, they produce about 10 million gallons of manure a year,” Mr Safferman said.

“(In areas of the US) where drought remains an issue, the accessibility of clean water could make the difference between a farm remaining viable or going out of business.”

Manure contained large amounts of nutrients, carbon and pathogens that could have an environmental impact if not properly managed, Mr Safferman said.

The researchers hope the Nutrient Separation System will be ready for commercialisation by the end of this year.