The Australian beef industry’s aspirations to substantially increase beef production will be very difficult to achieve without identifying the most efficient cattle and removing the inefficient ones.

Breeder cows remain in property herds for longer than other groups of cattle. The efficiency of breeder cows is therefore fundamental to enterprise profitability. Efficiency in breeder cows includes optimal feed conversion and the annual weaning of a healthy calf. These two measures of efficiency could be expected to be closely interlinked.

A research project recently undertaken in Brazil looked at how reproductive performance in Nelore beef cows was related to changes over time in liveweight (LW), body condition (BC) and rump fat thickness (RFAT).

The Nelore breed is derived from Zebu (Bos indicus) cattle from India and hence is similar to Australia’s Brahman. The project was carried out in the state of Mato Grosso do Sul, which has extensive beef production similar to tropical and subtropical northern Australia.

Given the similarity in origin of Nelore and Brahman cattle, and also the production systems, the findings in the project are very relevant to the Australian context. 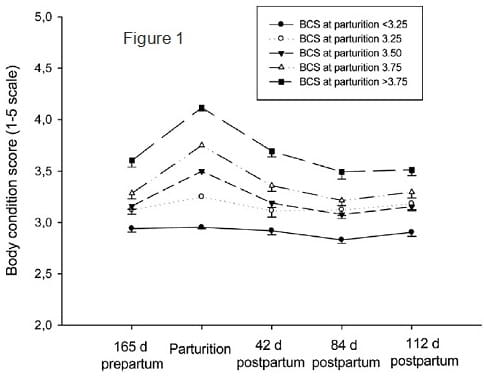 The Nelore cows were monitored at the time of weaning (about 165 days before the next calving), at calving, and during calving. For re-breeding, the cows were synchronised (day 42 post-calving) and mated by AI and then exposed to bulls.

Reproductive performance in the Nelore cows was most closely related to body condition (BC). The most notable observation was the large variation in body condition between cows and also the way in which body condition changed over time, as illustrated in Figure 1 (click on image for a larger view, or access via gallery at base of page).

Cows in relatively good body condition at the time of weaning showed a further improvement in BC from weaning to calving. Perhaps not surprising, these cows had a high probability of re-conceiving after calving (Figure 2). An observation that initially was counter-intuitive was that cows that lost most BC between calving and mating also had a higher probability of re-conceiving (Figure 3).

Closer analysis of the information revealed that the cows that lost most BC from calving to mating were also the cows in better BC at the time of calving (Figure 4). And these were the same cows that showed an improvement in BC from weaning to calving (Figure 1). There was a group of cows that had low BC throughout and had the lowest probability of re-conceiving (Figures 1 and 4, undesirable cows).

It was concluded from the project that breeder cows differ markedly in efficiency, and this is reflected in differences in BC. Some cows are able to maintain relatively good BC during annual cycles and these cows are likely to wean a healthy calf and still re-conceive. Other cows have poor BC throughout, probably wean a relatively poor calf, and have a lower probability of re-conceiving.

Given the need to improve the overall efficiency of beef production to meet industry, consumer and government aspirations for economic and environmental objectives, it is imperative that the proportion of efficient cows in breeder herds is increased.

This can be achieved either by identifying efficient cows and increasing their number, or by identifying inefficient cows and eliminating them from breeder herds. Some of the better BC scores observed in the Nelore cows would be difficult to achieve in northern Australia but the general underlying principles still apply.
Obtaining information on individual animal performance is difficult in extensive beef production systems and there is a need to look closely at new and emerging technologies for remote and automated monitoring of cattle.

This is being done by the new Livestock in Landscapes group at the University of Sydney and this area of work is led by Associate Professor Luciano Gonzalez.

The differences in efficiency and performance observed in the Nelore cows would be expected to also apply to analogous performance traits in all categories of cattle. Hence there is broad application of new monitoring technology to provide the information needed to meet the aspiration for increased beef production in sustainable and profitable enterprises.