BEEF cattle producers in Central Queensland’s Rolleston district have successfully trialled the use of hand-held ultrasound equipment as a means of improving market compliance when targeting EU and MSA market premiums where fatness can have a significant bearing on pricing.

An UltrAmac fat depth scanner was purchased to objectively measure fat depth at the P8 site before cattle were sent to the processor, as part of Producer Demonstration Site grassroots research project. 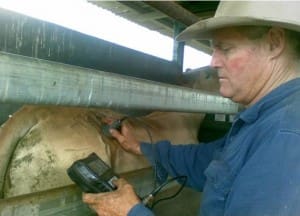 The overall EU compliance rate was very good at 87 percent with the main cause for non-compliance being P8 fat (6.5pc) and meat colour (3.9pc).  MSA grading was 60pc, with a further 22pc which met MSA grading failing to meet abattoir specifications mainly due to dentition and carcase weight.

The fat depth scanner proved to be a useful tool in making decisions on which cattle were ready for consignment, and which ones to keep at home, in order to avoid grid penalties.

The four main properties involved in the PDS were Bottle Tree Downs, Bundaleer, Lowesby and Springwood. These property owners, along with other members of the Rolleston CQ BEEF group, were actively involved in the initial process and development of the project objectives and methodology as well as the ongoing reassessment of outcomes and project direction.

Ian and Kate McCamley have used the UltrAmac fat depth scanner in their beef operation based at Lowesby, near Rolleston since 2011 to avoid costly market downgrades for EU cattle based on tight grid fat depth tolerances.

The McCamleys turn off between 3500 and 4000 head each year and fat-scan every beast leaving the property at least once. About one third of stock are scanned twice.

Since using the scanner, they have found the fall-out rate against specifications to be much lower. In some years, the fat-depth scanner could mean the difference between receiving a $250/carcase premium for hitting EU market P8 rump fat specifications, or missing out, Mr McCamley said.

Since the advent of the Pasturefed Cattle Assurance System and the prospect of significant premiums for PCAS/MSA cattle through Teys Biloela in Central Queensland, the scanner is now helping the McCamleys secure premiums of up to $315/carcase more consistently.

“The PCAS/MSA premiums mean the fat scanner is delivering a lot more to us in dollar terms than it did just 18 months ago,” Mr McCamley said.

“When the big PCAS/MSA premiums are running in Central Queensland from June to September, there are times when it’s possible to lose $1/kg on a 315kg dressed weight animal for not hitting the specifications,” he said.

“In our case, prior to using the scanner, we had a good handle on all the other criteria. What we could only guess was the fat depth and, invariably, not all that accurately.”

Mr McCamley said adopting the use of the scanner had improved his business’s compliance considerably. “It’s become an integral part of the cattle management and marketing side our business.”

The McCamleys have been using the scanner since hosting a market compliance MLA Producer Demonstration Site in late 2011. They learned to use the UltrAmac scanner as part of the PDS investigations.

They have fielded considerable interest from other producers in the scanning technology, including some 40 phone calls from producers interested in the technology. They have learned through trial and error how to make the most of the device.

Here’s some of Ian McCamley’s insights and learnings from using the scanner, published in the most recent edition of MLA’s Feedback magazine:

Learn to use the scanner correctly

“You have to know where the P8 site is located, and you have to apply vegetable oil evenly and liberally to the site. We use a backline product applicator gun, because it goes on in a good even band. We buy bulk vegetable oil from food wholesalers.

“You then have to move the scanner around a bit to find the right spot. Once you’ve done enough cattle you’ll get the feel.”

“You must record your scanning results for each animal and then cross-check with the carcase data on the processor’s kill sheets.

“If you’re finding the two sets of results aren’t correlating when one particular person is using the scanner, you can give them a bit more training.”

Mr McCamley also uses cross-checking to ensure he doesn’t miss out on premiums due to human error at the abattoir.

“When we see an odd, low fat measurement on our kill sheets, such as 5mm, we look in our records and see what we measured it at.

“If there’s a discrepancy we ring up the processor and ask for someone to go back to the carcase while it’s still in the chiller and re-measure the P8 fat. We’ve had a reasonable number changed as a result.

“The processors know we’ve carefully measured the cattle and have the hard data, and they understand human error can occur in a big plant, so they’ve been quite happy to follow up for us.”

Use the scanner for more than compliance

The McCamleys turn off between 3500 and 4000 head each year and fat depth scan every beast leaving the property at least once. About one third of stock are scanned twice.

“To comply with low-stress handling requirements, we scan the cattle about two to three weeks before they’re due to be sold, but we also use it about two to four months before expected turn-off, as a management tool.

“While we draft cattle on weight ranges and put them in finishing paddocks, we can also draft them on fat depth. This allows us to select cattle that are nearly meeting specifications, but not quite, and allocate them to the best available paddock.”

“Scanning also identifies the animals that are tending to run to fat early so we can treat them as a separate mob, because they’re not very efficient. If they’re just going to lay down fat we’d rather get rid of them and go buy a better quality replacement.”

In a live animal, the P8 site is on the rump at the intersection of a line going forward from the pin and a line down from the high point in the hindquarter.

The site was pinpointed in early 1980s research by John Moon, a former Department of Primary Industries District Meat Inspector from Brisbane.

“He was concerned with carcase fat being measured at either the 10–11 or 12–13 rib site, as he found no measure was possible on 14–15pc of carcases, as hide pullers had removed the fat on both sides at the abattoir.”

Dr Moon studied eight fat measurement points, designated names of position one to eight, using 1500 carcases. He found the ‘P8’ site was a standout for measurement as only 1.5pc of carcases could not be measured on at least one side. Subsequent research proved it was also a better predictor of carcase fat that the rib fat site.

Parts of this article first appeared in the February edition of MLA’s Feedback magazine.