These are the words of retired University of Queensland Associate Professor Dr Max Shelton following a recent visit to the region.

He says he is more convinced than ever that the answers to low productivity of the poorer fertility soils along the coastal belt of Queensland, are plain for all to see.

Dr Shelton has spent a lifetime researching and studying tropical pastures all around the world. He has been associated with many programs over the years in numerous different countries advancing pasture systems that help lift farming families and communities in third world countries out of poverty.

But the one that lies closest to his heart is the leucaena story and what he has seen it achieve in so many areas. From the cut and carry systems in Eastern Indonesia where local farmers feed 2-4 cattle on 1 ha of leucaena to the large areas of Central Queensland where thousands of hectares have been planted on single properties, Dr Shelton has experienced it all. The one common theme across the globe is that those farmers who had good stands of established leucaena and managed them well, were all in open admiration of what the plant added to their business profitability.

The development of ‘Redlands’ leucaena

The one area where uptake of leucaena is being held back is the extensive higher rainfall and humidity areas (>800 mm) of coastal Queensland.

A sap sucking psyllid that attacks the fresh growth tips, severely impacts productivity, in the autumn months in particular, of all existing commercial varieties. Realising the problem early, and with encouragement from northern producers such as Greg Brown and DPI extension agronomists Bernie English and Jim Kernot, and the financial backing of MLA; Max and colleagues Drs Scott Dalzell and Chris Lambrides at UQ took on the challenge to breed a new variety that was has a high level of resistance to the psyllid insect. 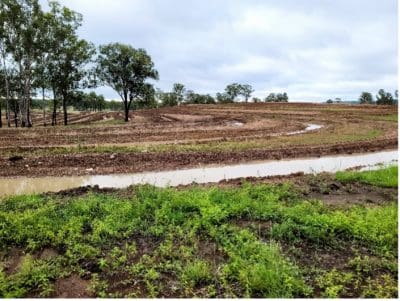 Many years of hard slog and setbacks finally led to the release of ‘Redlands’ onto the market in 2015. The availability of a psyllid-resistant variety increases the range of adaptation of leucaena by 30%, from 4.4 M ha to 5.7 M ha, largely in the coastal zone of Queensland and monsoonal northern Australia where large numbers of cattle are grazed on poor quality grass pastures.

It took some time for the selected seed producers to grow and then harvest enough seed to satisfy those who had eagerly awaited its arrival. Now with commercial paddocks that are 3 years of age, the results are up there for all to see. The same high weight gains are being achieved as from the other varieties in the Central Highlands.

Dotted right along the east coast from Tully to Gympie, commercial plots of ‘Redlands’ are being established. Hundreds of hectares, some of it under tickle tape, in the Whitsunday Shire have shown weight gains and carrying capacities that exceed industry norms. ‘Redlands’ has been successfully established on Goshen Station south of Mt Garnett; at Swans Lagoon south of Townsville under irrigation;  and right down the coast with areas being planted in the Gin Gin and Bundaberg regions. 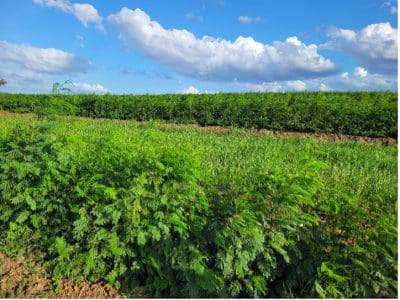 Max was especially impressed with results being achieved on ‘Fairview’ located just north of Calliope. ‘Redlands’ has been successfully established on gravelly ironbark and bloodwood ridge country and nearby flats which have poorly drained infertile soils with a clay layer at shallow depth. These are soils not normally suited to leucaena. A key to their success is the use of new planting techniques. After trial and error with poor early seedling vigour after planting, leucaena is being planted on 60 cm raised banks on the contour spaced approximately 10 m apart. Growth on these banks has been excellent due to several factors:-

Are changes to established leucaena production system needed for success in coastal country? 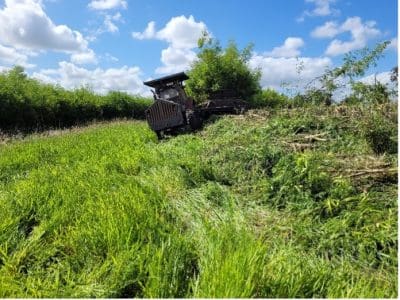 Unfortunately, despite ‘Redlands’ being a highly productive pasture system, adoption lags way behind potential. What are the possible reasons? For starters, leucaena plantings in this coastal environment will need intensive management:

Another huge advantage of regular cutting, is that it stops the production of seed, greatly lessening the threat of it spreading into areas where it is not wanted. Given the widespread concern about increased coastal weediness from the planting of ‘Redlands’, regular cutting will allay these fears.

Yet another benefit of establishing leucaena pastures is the chance to market carbon neutral beef due to the high carbon sequestration and mitigation potential of leucaena. Every cutting of excess wood equates to a top-dressing of soil carbon reserves, and leucaena leaf contains secondary plant compounds that reduce enteric methane emissions. The high profitability of intensively managed ‘Redlands’ leucaena also leaves open the option of destocking steep and marginal grazing lands for native tree regrowth to produce carbon offsets.

Dr Shelton summarises by emphasising that the extra management input required when planting “Redlands’ leucaena will be handsomely rewarded by excellent profitability, increased land value of properties, opportunity to produce carbon neutral beef, and the chance to almost eliminate the threat of weediness.