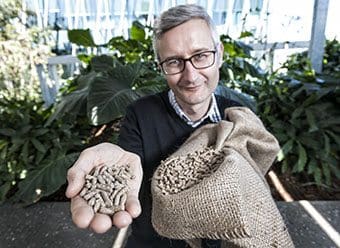 Associate Professor Robert Speight will use a new gene editing technique to boost feed for livestock.

The Queensland University of Technology (QUT) is leading new genetic research that aims to provide a nutritional boost for livestock and reduce costs for farmers and graziers.

The method involves making precise, targeted changes to the genome of living cells.

“The advantage of the technique is the speed, accuracy and adaptability it can achieve in specific genome editing that doesn’t lead to unwanted changes to the genome or addition of unnecessary foreign DNA,” he said.

Associate Professor Speight said a problem faced by the agricultural feed industry was the need to add enzyme supplements to aid digestion and reduce anti-nutritional factors as well as a requirement to provide additional protein.

He said, for example, yeast was commonly used as a source of protein in feed for livestock that is added separately to enzymes that help in the digestive process.

“This project involves generating specific ‘advantaged’ yeast that combine both the required protein with a boost in digestive enzyme in one go,” he said.

“As a result, it could then be fed to livestock not only as a source of protein but to also help feed digestion and nutrient uptake.”

He said by extending the range of enzymes this technology could apply to it had wider implications for farmers as they struggled to feed their livestock in drought conditions.

“By developing an enhanced feed for livestock it will reduce costs and improve on-farm profitability,” he said.

“We are looking at developing the enzymes themselves and also at moving towards lower cost, more fibrous feeds such as bagasse,” he said.

“But to use them we need to make them more digestible so the animal can access the sugars and energy and release more nutrients which means more of the feed will be converted into meat protein and less will be wasted and passed through the animal.”

Bagasse is the fibre left over after the juice has been squeezed out of sugarcane stalks.

The project is supported by Scottish-based biotechnology company Ingenza Limited which has a customer base across the chemicals, pharmaceuticals, and food, feed and fuel industries.

Associate Professor Speight presented his research as part of a panel at the World Congress on Industrial Biotechnology in Montreal on July 20.

A video to explain CRISPR-Cas9 is available here.

Associate Professor Robert Speight obtained a first-class degree in chemistry from Imperial College, London in 1996 before completing his PhD at the University of Cambridge.

He took up his position at QUT in August 2014 to focus on enzyme engineering and protein production systems for industrial biotechnology applications.