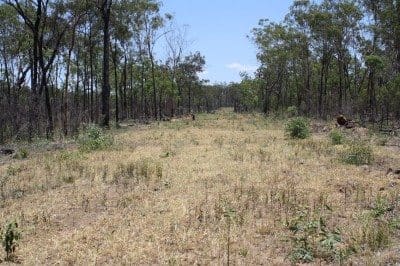 A Central Queensland cattle producer who cleared firebreaks on his property after a devastating fire in 2011 is now defending 46 charges of illegal bushland clearing in the Brisbane Magistrates Court.

The case highlights the confusion that exists around the allowable width of fire breaks in the State, with some landholders currently said to be holding back from undertaking fire prevention works until the outcome of the trial is known.

Soon after Michael Baker bought Chess Park near Eidsvold in March 2011, the 9000-hectare property was almost totally burnt out by bushfire.

After the fire, Mr Baker wrote to 32 different Government employees seeking advice on the correct width of fire breaks he could construct to protect his family, property and livestock from future fire events.

His legal team says Mr Baker received conflicting advice from employees of several government departments. The responses he received covered a wide spectrum of answers suggesting that fire break widths could be 1.5 metres, 5 metres, 10 metres, 20 metres, 30 metres and 1.5 times the height of the tallest tree.

The State’s Vegetation Management Act (VMA) provided an exemption for clearing remnant vegetation if the clearing was to establish a fire break, and provided the break was “no more than 20 metres wide or 1.5 times the height of the nearest vegetation”.

Further advice contained in Departmental fact sheets stated that “the width of the firebreak is related to terrain, vegetation type and local capacity to fight fires (firebreaks may be wider in areas that have large properties, few people and no fire brigade).”

Another section of the Vegetation Management Act allowed for “the clearing necessary” to remove or reduce the imminent risk that the vegetation poses of serious personal injury or damage to infrastructure.

Against this uncertain backdrop, Mr Baker engaged a fire expert to develop a fire management plan, which he submitted to the Queensland Fire and Rescue Service. He also wrote a letter to the Department of Natural Resources and Mines explaining his planned system of fire breaks and advising of his intention to start developing the breaks.

Chess Park adjoins the Dyngie State Forest. DNRM advised Mr Baker in June 2011 that it had no budget to clear a firebreak along his boundary with Dyngie State Forest. Mr Baker’s lawyers said Mr Baker offered to clear and fence the boundary at no cost to the Department. In a responding letter the DNRM agreed to allow Mr Baker to do this at his own expense, but said he could only clear a firebreak 5 metres wide.

The firebreaks Mr Baker built were wider than this, based on his view that a 5m wide firebreak would not be wide enough to allow a four-wheel-drive vehicle or a much larger fire truck to turn around, and would provide no protection in the event of one of the 40m-high trees that grew alongside the break burning and falling across the break and continuing the fire on the other side.

The DNRM first investigated the clearing on Chess Park in December 2011.

Mr Baker’s legal team says the department did not indicate that it disagreed with Mr Baker’s interpretation of the width of his fire breaks until two years later in December 2013, when it provided Mr Baker with four complaints listing 46 charges under the Forestry Act and Vegetation Management Act.

The Department issued a formal Stop Work Notice in late 2013. Mr Baker has not proceeded with the clearing since receiving the threat of legal action in late 2013.

The Government is alleging that Mr Baker made his fire breaks too wide and put them in the wrong place.

Tom Marland from Marland Law, who is representing Mr Baker, said other users of the same property were not held to the same restrictions as Mr Baker.

For example, within Chess Park’s freehold land area is a Forestry Entitlement Area (FEA). Loggers can access the FEA at any time without requiring Mr Baker’s permission to cut down trees and remove logs, leaving stumps and branches which can pose a hazard to people mustering cattle on horses, bikes or vehicles.

A QGC gas pipeline also runs through the property. Mr Marland said gas companies are allowed to clear the line for the pipeline and access roads and to create firebreaks alongside it, and are not held to the same clearing restrictions as Mr Baker.

Mr Baker’s legal team estimates that the cost of this prosecution for the State Government, which is expected to take 15 days in court to finalise, will cost in excess of $1,000,000.

A spokesperson for the Queensland Government said the Department would not comment on a matter that was before the court.