Dual-purpose graze and grain canola has come a long way in Australia since initial experiments in the 1970s.

Now, after almost a decade of GRDC-funded research by Dr John Kirkegaard and CSIRO, it has been widely adopted on mixed farms in higher rainfall and irrigated zones of central and southern NSW, Victoria and South Australia, and more recently in Western Australia.

The latest varieties on the market – winter hybrid types for grazing with high yield potential – can be sown in spring or autumn, providing a grazing period of two to four months through the summer or autumn/winter periods or across both periods in the longer season, cooler winter cropping growing areas.

“Our system experiments, simulation and grower case studies suggested that whole-farm profit on livestock-only farms could be increased by more than $100 per hectare by including up to 10 to 20 per cent area of dual-purpose wheat and canola,” Dr Kirkegaard said. Mixed-farmer John Thompson is seeing positive results from graze and grain canola at Lindale, near Inverell.

Despite living outside the typical area for canola grazing, lnverell NSW mixed-farmers John and Sarah Thompson have seen productivity gains since first growing graze and grain canola in 2014.

“Canola is a superior feed source to wheat and oats, and the success of the 2014 season encouraged us to go there again,” Mr Thompson said.

“We planted the canola in mid-March and continually grazed it down to the stump until the end of July.  Then we locked it up and took the grain off in mid-November.

“We’ve seen a lot of DSE grazing days off it. It also provides a very good tool for crop rotation and weed control with the Clearfield system.”

The former agronomist said while the system worked for them, growers needed to be wary of their local climate.

The graze and grain canola requires a six-week vernalisation period where minimum temperatures need to be below four degrees for the reproductive stage to kick in – so it may not be suitable where these conditions are less likely to occur.

Mr Thompson said growers should also check with their local consultant about the impacts of grazing brassicas on animal health. 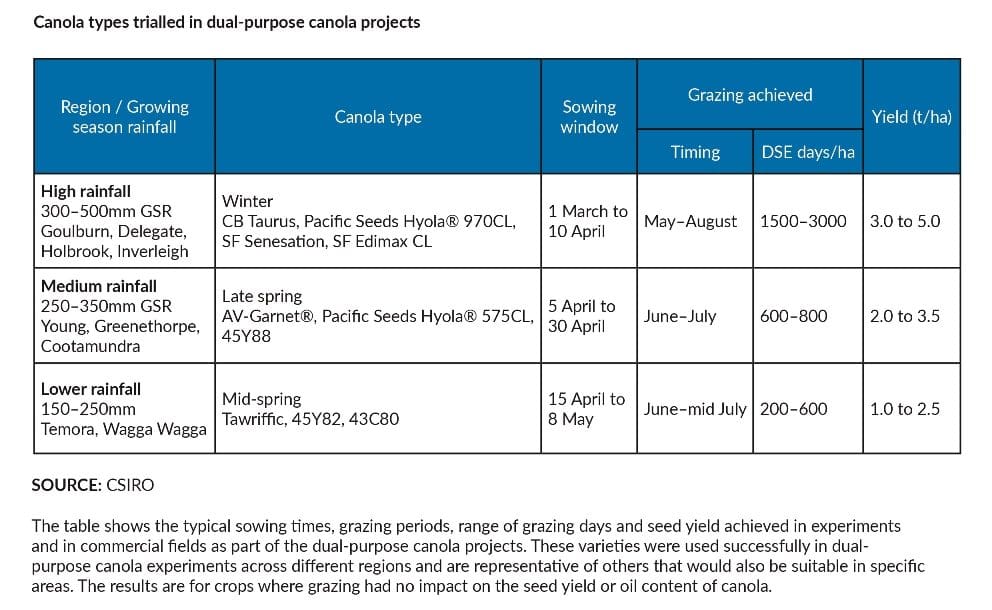