CATTLE producers have again been warned to test stockfeed from drought-stressed crops for nitrate levels.

NSW Department of Primary Industries analytical chemist, Richard Meyer, said up to 25 percent of failed crops tested in the past week had nitrate levels which pose a health risk to stock. 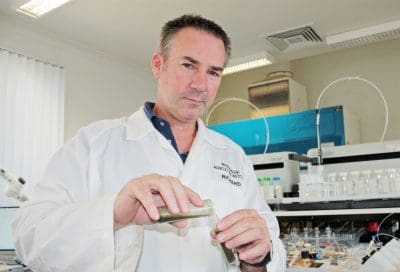 The NSW DPI Feed Quality Service in Wagga Wagga had been bombarded with four times as many samples as normal from farmers making hay and silage out of failed crops, Mr Meyer said.

Tests showed these canola hay and silage products can be highly nutritious, in terms of energy and protein, but can also have high nitrate levels.

“Our message is that these products can represent good value for feeding, but nitrate testing is critical to identify problem lots and avoid stock losses,” Mr Meyer said.

“While the majority of samples tested have been canola, we have seen elevated nitrate levels in some samples from failed cereal crops.”

Individual animals and mobs vary in their susceptibility to nitrate but as a guide, levels above 5000 parts per million (ppm) can cause health issues and levels above 10,000 ppm are a risk of causing deaths when fed to stock.

“Producers should ask for feed test results when they buy hay or silage, including nitrate levels,” Mr Meyer said.

Feed with higher nitrate levels must be managed, and stock should not eat it as their total ration when they are hungry.”

Of 360 canola samples tested between September and October this year, 25pc were above 5000 ppm and 8pc above 10,000 ppm, a point where toxicity can cause deaths.

Tests in the past month have shown one crop with nitrate levels of 45,000 ppm and several above 20,000 ppm.  Average energy and protein values were 9.7 MJ/kg and 15.5 per cent crude protein.

NSW DPI research officer, John Piltz, said there was no evidence that high protein content is a predictor of nitrate content, and data from this year’s canola showed no such relationship exists.

“While silage is normally considered safer because the fermentation process reduces nitrate levels, this applies to fine-chop silage.

“If crop nitrate levels are very high then ensiling may not be enough to make it safe. Baled silage is drier, with less fermentation, so the reduction in nitrate may not be as great,” he said.

Data from last year’s feed tests of recovered canola showed only a low to modest reduction in nitrates in silages compared with hays. There is no change in nitrate levels in hay over time.

Canola nitrate levels in the stem can be 10 times higher than in the leaf, so stock should not be forced to graze canola stems, unless safe. Cattle may also be more susceptible than sheep because they are less selective grazers.

A number of suspected and confirmed cases of deaths due to nitrate poisoning have been reported across NSW in the last 12 months.

Producers should contact their veterinarian or Local Land Services livestock officer for advice on how to manage high nitrate levels and livestock.

Additional support and information is available from NSW DPI through these channels: