‘Pre-vaccinated’ weaner sale will blaze a trail for performance

AN UPCOMING northern Victorian weaner sale will blaze a trail for store cattle marketing in Australia, with almost the entire yarding being offered with clearly-defined, certified pre-vaccination history, underpinning their future performance.

Local Corryong independent stock agency Costello Rural has taken the step to underpin its annual Corryong Christmas Weaner Sale on Friday, December 11 with pre-vaccination for respiratory and other diseases, as a point of difference.

More than 600 weaners being offered at the annual Corryong Christmas weaner sale, including this line of steers from Baringa Station near Towong, will this year be sold with verifiable pre-vaccination history.

Corryong is located in northeastern Victoria, near the headwaters of the Murray River, about 90 minutes from Wodonga. The annual Christmas Weaner Sale is a local tradition which extends back 45 years or more, well-supported by some of the best commercial breeding herds in the Upper Murray region.

While the region’s high rainfall give it a reputation more as a grass finishing and growing region, it also takes pride in producing weaners among the best in the state.

While there have been occasional vendor lots and smaller runs of cattle offered in southern weaner sales with vaccination protocols previously, evidence suggests that this is the first attempt at adopting a ‘blanket’ approach to vaccination history across an entire weaner sale catalogue.

“The idea came out of a local animal health and marketing seminar held back in September, and at least 85 percent of the vendors represented in this year’s sale have supported the concept, and have gotten on board,” agent Justin Costello told Beef Central.

“The benefit of pre-vaccination is obvious, and there is a clear buyer preference now from both feedlot operators and backgrounders for weaner cattle that are suitably protected,” he said.

“There has definitely also been some pull-through for this move, and we think that will translate through to positive outcomes in results on sale day, once word gets out that the biggest portion of the yarding (more than 600 head) will carry well-documented vaccination,” Mr Costello said.

“We’re actively marketing the sale now, and basically the potential buyers are very happy – they’re asking for more information, and know they will be able to operate with confidence.”

With the prices now being paid for young cattle and the underlying confidence in the cattle market, the move to feature pre-vaccination as part of the Corryong sale was designed to appeal to buyers who recognised quality, and wanted well-prepared weaners, ready-to perform, Mr Costello said.

Subject to results, Mr Costello thought the entire yarding could be presented with vaccination this time next year. “It’s just a matter of timing,” he said.

To avoid any confusion over the level of vaccination in each sale pen, Costello Rural has devised a three tiered ‘gold/silver/bronze’ vaccination identifier, which will be linked to pen cards and different coloured ear-tags for each group –

Different coloured eartags will be used to identify each of the three vaccination protocols.

The groupings are aimed at marketing cattle that suit the needs of different types of buyers and giving them greater confidence over performance.

“For the producer it gets them thinking about where those cattle might be best suited and preparing the cattle in a way that suits a wider range of buyers on the day,” Mr Costello said.

A verification process has also been established, based on NVD/certificate references, and product batch numbers used for confirmation.

One of the vendors involved in the pre-vaccination process for this year’s Corryong Christmas Weaner sale will be Baringa Station, near Towong, in the Upper Murray. 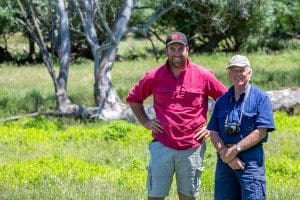 Managing the holding for owners Honour and Mark Auchinleck is Paul Nugent, who is preparing 90 Angus weaner steers for the sale, all of which will be sold under the ‘gold’ vaccination group.

Baringa has sold at the Corryong feature weaner sale for the last four years, although this is the first time that a vaccination program has been employed.

Most of the sale steers in the past have gone to grass restockers, but last year feedlot buyers were active on the cattle also.

“The idea to adopt a sale-wide approach to vaccination as a selling point came up during a local marketing and animal health seminar held in September,” Mr Nugent said.

“It’s the first year that we’ve pre-vaccinated weaners in this way, but if it adds a little more buyer appeal because of it, than we are all in favour of it,” he said.

“The feedlots obviously prefer to receive calves that way, because it reduces risk of respiratory problems later, once the mobs are co-mingled,” he said. “We want them to come back and keep buying our cattle, so if pre-vaccination history can deliver that, then let’s do it.”

“Some feedlots have been offering a premium for Bovillis MH+IBR treated calves bought out of the paddock, but we’re counting on that demand being transferred across into the saleyard system as well, through this program.”

Click the link below to view a short video of the upcoming Corryong Christmas Weaner Sale offering: