TAKE a look at the four-day speaking program for the international cattle vets conference happening in Cairns this week, and a feature that is patently obvious is the extraordinary amount of attention being devoted to just one issue: pestivirus.

It’s a reflection of the commercial impact that pesti, also known as bovine viral diahorrea virus, is having on beef and dairy production around the world.

Across the four-day program at the 2014 World Buiatrics (ruminant) Congress in Cairns, no less than 22 scientific papers will be delivered, directly relating to BVDV, its effects and management in cattle. An unknown number of other presentations are likely to mention it, in the context of broader topics such as “Foetal and calf loss in extensively managed beef herds.”

Almost 1000 veterinarians from across the globe have come together for the conference to harness and share their knowledge of ruminant species – predominantly cattle, but also including sheep, alpacas, goats and buffalo.

The incoming president of the Australian Cattle Vets Association, WA’s Dr Enoch Bergman, said there was a strong sense of ‘collegiality’ among the vets in attendance, representing many different nationalities.

“As cattle vets, we’re all trying to achieve the same aim, in making our livestock producers more profitable. It’s just that we all go about it just a little differently, depending on local challenges, but there’s lots we can learn from each other,” he said.

Beef Central asked Dr Enoch Bergman why such a heavy time allowance had been devoted to just one disease topic.

“I think the main reason is that this is an international conference,” he said.

“Within Australia, awareness and prioritisation of BVDV is perhaps not yet as great, but overseas, vets and others are now placing much greater emphasis on it.”

Apart from countries harbouring Foot & Mouth, the rest of the world now rated BVDV as one of the most significant cattle diseases in terms of impact on production.

He hoped the consistent messages that would emerge for Australian vets attending the conference was that BVDV matters; it costs producers money; it was the vet’s job to make producers more profitable; and BVDV was now a manageable disease.

“I think this conference could help blow the lid off the lack of BVDV awareness in this country,” Dr Bergman said.

Australia had access to the diagnostic and management tools to manage the disease, but up to now, it had been struggling to gain that ‘real momentum’ that was needed to make it happen. 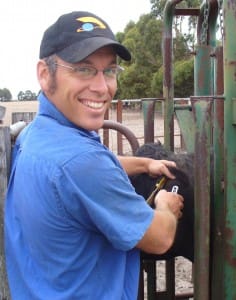 Asked why it had not up to now triggered a stronger and earlier response, Dr Bergman said the main issue had been that for so long, there had been very few tools to manage BVDV.

“Up to 2006, the only way to test for the disease was using a blood test, which required the use of a vet to take the sample, and the test was quite expensive. Additionally, there was no vaccine,” he said.

“But today, it’s much easier and cheaper to measure the status of individual herds, and manage it appropriately with the available tools,” Dr Bergman said.

Earlier, before good measurement and management tools were available, producers had tended to take the view that BVDV was ‘ubiquitous and endemic, we can’t do much about it, so let’s just live with it.’

Because the industry had lived with BVDV for so long, producers had literally stopped measuring for it in their herds.

Dr Bergman will speak during the conference on the development of systematic strategies for herd-level disease eradication.

His advice to his clients in managing extensive herds is to firstly investigate the immune status of replacement heifers when they’re about a year old.

“If they are already highly immune, let’s not spend money on vaccinating them: instead, let’s focus on ensuring that none of them are Persistently Infecteds (PIs). Conversely, if they have no immunity, my advice is let’s give them some immunity to reduce the likelihood of them producing a PI down the track. If we do that consistently, that property will eventually rid-itself of the virus.”

Several international speakers at the conference will provide accounts of how their countries are managing, or eradicating BVDV. Most European countries that have achieved BVDV freedom have done so without vaccination.

The process took Sweden and Denmark about 12 years each to achieve, while Switzerland took just five years, by ear-notching the entire cattle population, and then testing every calf, within five days of birth, for the next two or three years.

Switzerland presented a particularly difficult case, because each year cattle from each home property are mostly run on ‘communal’ pastures higher up the slopes over the summer, presenting higher infection risk.

The overall incidence of PIs found in Switzerland at the start of the campaign was about 0.8pc, in line with modelling seen elsewhere. The incidence of PIs in calves the first year of testing was 1.5pc, dropping to 0.25pc a year later. That’s because the adult PIs were now gone, and the PI calves did not get the opportunity to create new PIs.

By the end of the third year, the incidence of PIs was down to 0.05pc.

In Norway, which has also eradicated BVDV, some modelling was done on the likely pay-back period for the investment in eradication (in this case, principally in dairy, rather than beef cattle). It found that the payback should occur within ten years of the completion of the program (anticipated to take ten years, and completed around 2004).

“In reality, in the first year, they cut abortions in half, increased milk production by 96kg/year, saw a 7pc reduction in mastitis, and cows returned to calf 14 days earlier, on average, in annual production systems,” Dr Bergman said.

“When the Norwegians tallied-up the impact, in the first year, they lost a little money, but the return on intervention was already paying dividends by the end of the second year. Instead of ten years to recoup the expense, they started making money almost immediately, because they grossly under-estimated the production cost of BVDV,” he said.

“The world is now recognising that BVDV is not just a ‘little disease that causes a few lost calves and a few PIs’: it is a disease that impacts almost every aspect of cattle production. And that’s where things are starting to get exciting.”

He said many Australians tended to understand that BVDV causes reproductive losses, but only a little bit.

“They kind of under-estimate its impact. Their opinion was, if you’ve got it, your heifers are likely to get exposed, before they get pregnant, in which case they are not going to get reproductive loss – meaning it is a ‘self-limiting’ disease. But the point they forget about is that they are still endemically infected: obviously, some animals are still getting exposed during pregnancy, and consequently losing their calf.”

Another factor that is drastically under-estimated in Australia is that PIs cause immune suppression, and susceptibility to other diseases, such as bovine respiratory disease.

Dr Bergman said his goal, by the end of this week’s conference, is to have all vets recognising that BVDV is a disease worth managing, and that the tools are available to do so.

“In Australian conditions, I think we can use a combination of vaccination, and PI testing together, to ensure we get a better outcome,” he said.

“Within 20 years, I’d like to think that we will see large areas within southern Australia, at least, that are BVDV-free, as producers recognise how much it can improve their profitability.”