THE corn harvesting method known as ‘snaplage’ is emerging from obscurity as more nutritionists and producers employing fodder conservation recognise its advantages.

Snaplage refers to the process of harvesting taking just the cob and husks with a snapper front mounted on a harvester, and is growing in popularity due to its simplicity and high feed value if implemented correctly. 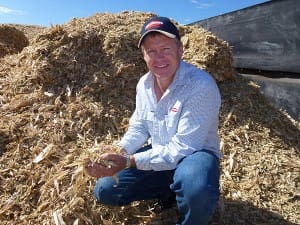 “Snaplage offers increased flexibility of the time of harvest, it can be stored and ensiled in a simple silage bunker, and the user has processed grain ready to feed into a ration,” he said.

Mr Schoorl said it was also a high-value energy concentrate source that stacked up well against corn silage.

Snaplage was higher in energy than corn silage, with similar crude protein levels.

“It also improves rumen digestion compared to dry corn, has some fibre, and starch digestibility increases in time.”

Mr School recommended harvesting snaplage at 30-40 percent moisture (60-70pc DM) and to follow good ensiling practices to enhance and maintain the feeding value of the product.

“We recommend using the most advanced inoculant available, Lalsil HC, to protect the snaplage against spoilage and maintain its high feed value at feedout,” he said.

“Silostop oxygen barrier sealing film for the silage pit is our preferred sealing option for snaplage.”

Progressive dairy farmers Jason and Michele Bake have been experimenting with the harvest method at their farm, Bangalara, near Bonville, between Bellingen and Coffs Harbour, for a number of years.

Mr Bake said a change in rainfall and absence of disease helped them secure a 10t/ha corn yield increase on normal years.

“Last season was a relatively drier season where we received 550mm, down from our median annual rainfall of 1500mm, which proved to be a better season for growing corn, and there was no sign of leaf or cob disease,” he said.

He said he was pleased they conserved a range of summer crops to help cater for the dry winter that followed, and are planning their summer program again.

This summer they are growing PAC 606 for its superior leaf disease resistance and high starch content.

“In a high-rainfall area, you need a hybrid with good disease resistance.”