A RIP-ROARING drought and buoyant livestock prices have bolstered interest in hard-seeded legume pastures as a worthy inclusion in mixed-farming rotations in New South Wales.

Already a favourite in some Western Australian farming systems, the Mediterranean natives and their spin-offs can last for years in paddocks which can host simultaneous cash crops, and are being considered as an alternative to subterranean (sub) clovers and medics.

Natives sourced from the Centre for Legumes in Mediterranean Agriculture (CLIMA) and investigated in WA by the Murdoch University, University of Western Australia, CSIRO and WA’s agriculture department introduced hard-seeded pasture legumes to Australia in the 1990s.

Part of their initial appeal was their ability to increase the amount of groundcover provided by winter-crop residue in the face of wind and rain events over the summer fallow period.

The hammering topsoil in parts of NSW has received from dust storms in the face of failed or low-yielding crops due to drought has boosted eastern-states interest in them.

Global Pastures director Neil Ballard is a long-term proponent of hard-seeded pasture legumes, and grew Santorini, the first serradella variety, when it was released in WA in 1995. 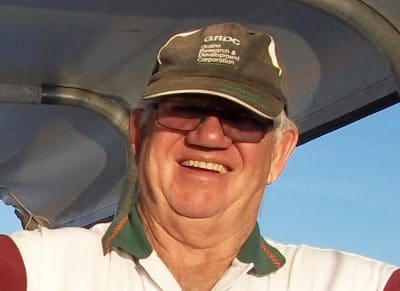 In WA, he said concerns about herbicide resistance and high expenditures on artificial nitrogen were continuing to boost interest in hard-seeded pasture legumes.

He said farmers from eastern states who wanted to maximise their earnings from livestock with a resilient and flexible pasture base have been contacting him more frequently in recent times.

“They allow you to alter your crop-to-pasture ratio, and your crop-to-livestock ratios, and you can also reduce your dependence and outlay on artificial nitrogen,” Dr Ballard said.

“Now that sheep and wool and meat are providing a strong level of return, some people are thinking cropping by itself isn’t doing the land any good.

Dr Ballard said some cropping operations, including that of  users Colin and Anna Butcher at Brookton, 120 kilometres east of Perth, are saving tens of thousands of dollars per year by growing hard-seeded pasture legumes which have reduced their need for artificial nitrogen.

The Butchers have also been able to grow wheat crops yielding up to five tonnes per hectare, with no response to artificial nitrogen shown in barley, canola and wheat crops, in paddocks after hard-seeded pastures.

“This compares with a grain legume, where you cart 30 per cent of your nitrogen out in the truck.”

“The general message is that you need a legume in the rotation to get your own organic nitrogen.”

“Long-term croppers are finding more and more paddocks are becoming uneconomical to farm because artificial nitrogen isn’t the answer.”

A further agronomic benefit of hard-seeded pasture legumes is their ability to promote rhizobia populations, which help crops absorb nutrients in the soil.

Less reliable rainfall patterns have contributed to mixed farmers looking for an alternative to sub clovers and medics for their pasture phase.

Management has also played a part in the loss of popularity in sub clovers and medics in some districts.

“Because of how much livestock weren’t worth through the 90s and into the Millennium Drought, farmers weren’t always following through with their fertiliser inputs, and seed banks fell away.”

Dr Hackney is involved with a number of trial sites, including one at Ungarie, northwest of West Wyalong, which got 90 millimetres of growing season rain in last year’s unusually dry growing season.

“Serradella, arrowleaf and biserrula can go down to 1.5 or 2 metres for moisture, so they are quite well protected from dry spring conditions.”

“We saw the benefits of it in the first couple of years, and we just kept going to where we are now, with 90pc of our farm sown with biserrula.”

“We’re still learning, but we feel it’s handling our system easily, and it’s regenerating after three years without seeding.”

The O’Hare farm covers 2200 hectares, and is 50/50 split between sheep and cropping in a 475-millimetre annual average rainfall area. 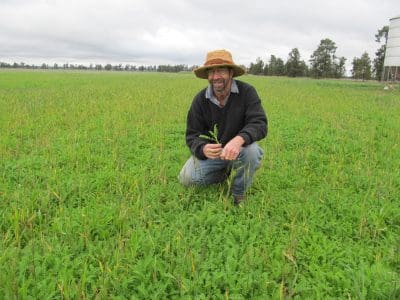 Mr O’Hare grows biserrula on its own, and has some area planted to a mixture of arrowleaf, bladder and gland clover, and additional area with barrel medic.

“The hard-seeded clovers are not as reliable, and they didn’t perform so well in the wet year in 2016, which didn’t worry the biserrula, but they all have their place.”

Esperance-district farmer Scott Welke, Cascade, first experimented with serradella in the early 2000s as a means of dealing with red- clover syndrome.

“Our sub clover base was diminishing, and we couldn’t carry as many sheep as we used to, so I got into Santorini serradella as an annual to put in with subtropical perennials.

“It’s bolted away on our sand hills, and turned some really ordinary country into productive country.”

Mr Welke said the farm’s area was split half and half between cropping and sheep, but the improved productivity in their pastures since serradella was introduced has allowed them to run the same amount of sheep on 30pc of their country, and crop the other 70pc.

“For us, serradella is an autumn-break plant, and seems to have a stronger resistance to disease and insect pressure from pests like red-legged earth mite.”

“It’s a deep-rooted plant, and can hang on into December if get a late rain in spring.

Mr Welke harvests his serradella every year, and inoculates the seed.

“We use lifters to harvest, as if you were harvesting peas or lentils.

Now that the sun has set on suction-harvester manufacturing, hard-seeded pasture legumes are making mechanical as well as agronomic sense.

Suction machines are essential for harvesting sub clovers, and handy for harvesting medics, but have become difficult to purchase second-hand, and problematic to fix due to the shortage of genuine parts.

“The practical thing about these hard-seeded pastures is you can grow and harvest your own seed with a conventional header,” Dr Hackney said.

Seed harvested on farm has very high hard-seed content, and new methods of establishment — summer and twin sowing —have been developed to allow cheaper and timelier methods of pasture establishment.

With summer sowing, hard seed, or pod segments in the case of serradella, are sown in summer.

Summer sowing also allows pasture sowing to be completed before winter-cropping program begins so labour can be used more efficiently.

Not all hard-seeded species and varieties are suitable for summer sowing.

The hard-seeded French serradella varieties Margurita and Erica developed by Dr Brad Nutt of Murdoch University and bladder clover work well for summer sowing in WA and NSW while, arrowleaf clover and biserrula have also been successful in NSW.

The hard seed breaks down during the final year in the cropping phase, and emerges on the following autumn rain.

Hard-seeded French serradella and bladder clover have performed well in twin sowing trials and commercially in WA and NSW.

Both summer and twin sowing require use of 20-30kg/ha of serradella pod or 10-15kg/ha of unscarified seed.

Hard-seeded pasture legumes will germinate when their outer seed case breaks down due to rain, time or temperature variation.

“The idea is to get as big a seed bank in the ground as you can” Dr Hackney said. A first-year stand of bladder clover at McDougall Bros farm at Tincurrin east of Narrogin in WA. Photo: Global Pastures

Mr Ballard said planning ahead was needed to get seed into the ground before the break and maximise germination response on the next rain.

He has recommended the following management to establish hard-seeded legume pastures:

“Follow this three-year discipline, and you will be set up for life,” Dr Ballard said.

Once a seed bank is established, hard-seeded legumes are very persistent.

It is generally a good idea to manage the species to allow for good seed set at least every two to three years following initial establishment to keep seed bank numbers high and ensure robust pasture regeneration.

“These plants have survived uncontrolled grazing by sheep and goats in the Mediterranean for hundreds of years,” Mr Ballard said.

Mr Ballard said new species leave a good body of dry feed in the paddock which does not deteriorate with the amount of summer rain which would normally ruin sub clover.

“They allow you to establish pastures in a different way.

“Cropping can win out over pasture because you can pick and choose your hard-seed breakdown pattern.”

“They are different to manage than sub clover, not harder.”

Dr Ballard said serradella and biserrula are also beneficial in breaking the cycle of nematode population build-ups for both Pratylenchus neglectus and Pratylenchus thorneii.

“Many growers are including them in their rotation mainly for that reason.

“Sulla, which isn’t grown much in WA, serradella and biserrula are the three best options for breaking nematode-breeding cycles.

“One year of these reduces the populations enormously, and results in higher yields in following crops.”

Dairy Australia and the Rural Industries Research and Development Corporation have also contributed in the past.

Researchers are now evaluating and developing species and varieties to cope with challenging environments such as high-boron and high-aluminium soils, and earlier-flowering varieties for low-rainfall areas.