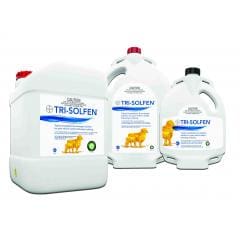 Tri-solfen is a post-op anesthetic and antiseptic spray which is expected to be approved in the cattle industry for off-the-shelf use next year.

IN THE past six years there has been an unmistakable rise in the number of consumers nominating animal welfare concerns as a key influence over their meat-purchasing decisions, according to consumer research shared by Meat & Livestock Australia at a recent Teys Australia field day near Condamine.

Results from annual consumer surveys shared by MLA community engagement manager Jax Baptista show that price and quality remain the two biggest factors cited by consumers that influence their decisions to buy meat, but animal welfare concerns have now risen to third, ahead of environmental considerations.

The primary message for cattle producers from both Ms Baptista and McDonalds Australia’s Susanne Craig at the Teys field day was that consumers want to be able to trust that the meat they are eating has been produced from animals that have been treated in a humane way at all times.

What does it take to build that trust? By having fully transparent supply chains, or in other words, farming operations that producers would happily allow urban consumers to visit on any given day and at any given time without fearing what they might see.

While many producers would already be comfortable with this idea, one area that may still cause some concern would be the process of branding.

Societal concerns around animal welfare have been building for a long time and with them have grown industry efforts and investments to find ways to reduce the pain and stress animals experience under traditional husbandry procedures.

So where is that work currently at? What pain relief products are now available to cattle production enterprises, and what lies ahead in the research and development pipeline?

Freeze branding is regarded as a relatively painless alternative to hot-iron branding but one that also requires specialist equipment, more time to apply (which impacts on its practicality and viability for large commercial operations) and a higher cost per head. At present freeze branding is most commonly used in the horse, dairy cattle and stud beef cattle industries (see today’s separate article providing more detail on the freeze branding process).

The only source of pain relief currently available to Australian cattle involves the expense and time-consuming processing of commissioning a veterinarian to administer pre- analgesic injections prior to operations such as dehorning or castration. Like an injection you receive at the dentist, the numbing effect takes about five minutes to kick in, and then lasts for approximately 30 minutes to an hour.

Other injectable products include the (Nurofen like) non-steroidal class of anti-inflammatory drugs such as meloxicam and ketoprofen which are mainly used in dairy cattle but can be used in beef cattle under veterinary supervision.

A pain relief product which is awaiting approval for off-the-shelf use in the Australian beef cattle industry is Tri-Solfen. Manufactured by Bayer, Tri-Solfen is anesthetic and antiseptic spray developed in the late 2000s to deliver post-operation pain relief to lambs immediately following mulesing to reduce their lifetime risk of fly strike.

Tri-Solfen is sprayed onto the open wound immediately after the operation and provides pain-relief for several hours, stops bleeding and also provides protection against infection. The spray contains an organic marker to indicate that it has been applied. It also has a 90-day withholding period after use on sheep that have been mulesed with no export slaughter interval established yet.

Western Australia is already ahead of the curve in that it has approved Tri-Solfen for use by commercial cattle producers in the state. Queensland is also working to have Tri-Solfen registered for all cattle operations, building on work that was pioneered and championed by the late Zanda McDonald of McDonald Holdings, Cloncurry (see video highlighting of MDH’s animal welfare work here).

Livestock producer and animal nutrition industry leader Chick Olsson, who was involved in the development of Tri-Solfen, told Beef Central that progress is being made and registration for use by all cattle operations is expected by next year.

Sheep producers can currently buy Tri-Solfen off the shelf from Landmark. However cattle producers in States other than WA can only access the product at present via a prescription from their veterinarian.

Mr Olsson said the voluntary take up of Tri-Solfen has been an unheralded success story in the Australian sheep industry.

He estimates that 70pc of Australian sheep producers now voluntarily use the product to treat around 7 million lambs a year, and as many as 50 million lambs have now received pain relief during the mulesing operation since Tri-Solfen was registered for use on sheep back in 2008.

The product costs producers about 40-50c per lamb to apply, Mr Olsson said. While a small market premium was currently available for wool sold from pain-relief treated sheep, Mr Olsson said most producers were using tri-Solfen simply because it was “the right thing to do”.

“This is the story our industry should be telling,” he said. “All the good work that people are doing voluntarily with no guarantee of being rewarded, they are doing it because it is the right thing to do.”

Will an anesthetic treatment satisfy animal welfare advocates if it is applied after the procedure, rather than before?

“There are people at RSPCA who are brilliant I find and really think it is great and they are looking at the science, because 95pc of the pain comes in the next day after the operation, and Tri-Solfen provides 24 hour pain relief after the operation.

“A quick mulesing cut is painful but not as painful as four hours afterwards.

“Some rights groups and welfare groups are hard to talk to, but there are very reasonable people out there who think that what Australian farmers have done is amazing, and that is the story we should be telling.”

Troy Pharmaceutical has released a product containing the non-steroidal anti-inflammatory drug – meloxicam – for cattle. It is easy to apply as a sticky liquid into the space between the gums and cheeks. No needle is used rather a drench gun like applicator. It delivers pain relief within 5- 10 minutes with efficacy lasting 24 hours or longer. The product is registered to control pain following surgery and is available through veterinarians. It has a 14 day meat withholding period and a 21 day export slaughter interval. It will allow producers to legally comply with the cattle standards requiring pain relief following painful husbandry practices in animals more than 6 months of age.

What’s coming in the research pipeline?

Meat & Livestock Australia told Beef Central it is currently investing about $7 million of producer levy funds in the area of animal health, welfare and biosecurity, of which pain relief focused research forms a small part of the total spend.

One area of focus surrounds a product for pain relief in sheep and cattle”, or more candidly and effectively as “Numnuts”.

In simple terms Numnuts is an elastrator ring device that is fitted with an anesthetic syringe and which provides a tissue-numbing injection when the elastic band is applied to the testes and tail.

MLA says the procedure provides immediate pain relief to lambs and allows them to mother up more effectively after the operation, results in fewer losses and prevents the production hit to growth that occurs after castration.

A pilot trial is now underway in the beef industry, with the Numnuts device being trialed on young bull calves up to three months of age.

Longer term solutions to eliminating painful husbandry procedures include the industry’s recent work to develop an Australian Poll Gene Marker to determine if an animal is ‘true polled’. That is, if it carries two copies of the polled gene and naturally lacks horns, and therefore naturally eliminates the need for an animal to be dehorned at branding.

Initially developed for use in Brahmans, the test can now be used with a high degree of confidence across a range of tropical and temperate cattle breeds and is helping breeders to reduce horns in subsequent generations.

How practical is freeze branding for large commercial beef herds?

Legal requirements for cattle branding in each State and Territory