Online bidding at physical auctions: a growing trend in 2016?

One livestock marketing trend that appears set to grow in 2016 is the use of online interfaces to link physical livestock auctions to outside bidders.

Interfaces allow online buyers to bid for lots in real time in competition with buyers at a physical auction, opening that sale to a wider pool of potential buyers and greater competition for their stock.

The main obstacle to greater uptake of online bidding interfaces to date has been relatively poor rural internet services and the large number of network black spots. You only need to spend a few minutes on this popular Facebook page to understand just how poor data limits and speeds remain for many rural users.

However, rural internet coverage is expected to improve with the impending launch of the National Broadband Network’s Sky muster satellite in coming months.

AuctionsPlus has been offering live bidding interfaces for on-property stud livestock sales, in addition to its online simultaneous livestock auctions, since the late 1980s, and is reporting greater uptake of its interface service in recent years.

The potential that exists for linking physical auctions to online bidders has also attracted at least one new player, with Elite Livestock Auctions launching this month to provide its own online bidding interface for on-property auctions.

Despite the shortfalls in existing rural internet standards, both service providers have told Beef Central their respective platforms allow online interfaces to be used effectively at physical sales in many areas, with a minimum of live auction audio, live price streaming information and interactive bidding.

Both services say they can also incorporate live video streaming of auctions where internet coverage is better. 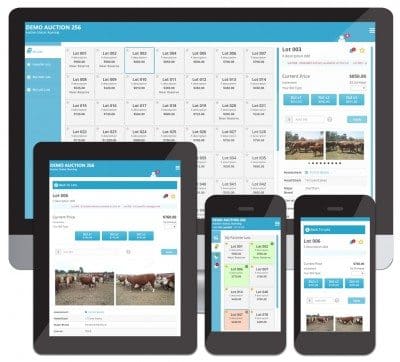 The new AuctionsPlus bidding interface which will be available in February. (Click on image to view in larger format)

It has three interface sales booked for the next week – the Nerstane Merino Ram and Ewe sales, the Elders Hamilton Narweena Station Weaner Sale on Friday the 29th and the 3-day Tamworth Classic Horse Sale commencing next Friday – and 12 interface stud sales booked for February.

CEO Anna Speer said AuctionsPlus’ interface service started to gain traction with the advent of digital photography and online video footage in the 1990s-2000s, which gave farmers the confidence to bid remotely on livestock at auctions without first having conducted a physical inspection of the animals.

Ms Speer said the company’s platform has been designed to handle the poor internet connectivity still prevalent across Australia by using small packages of data.

“This ensures that no buyers miss out on the opportunity to participate in the sale – should they have no internet connectivity or their system drops out due to a storm or some unexpected event, we can see this has occurred and will call the buyer to assist,” she said.

She said AuctionsPlus is also releasing a new bidding client based on cutting edge technology in February which will work on any platform (phone, tablet, computer) and has been designed to give the buyer more information during the bidding process.

Just last week the Lawsons Angus Sale in WA, which used the AuctionsPlus interface, provided a good example of the benefits online bidding platforms can offer.

Fierce bushfires prevented a number of usual buyers from attending the sale, so they used the online interface instead to bid remotely on their selected bulls at the auction. As a result 10 of the 110 bulls offered were sold online with the online buyers also assisting in enhancing the competition on-farm. 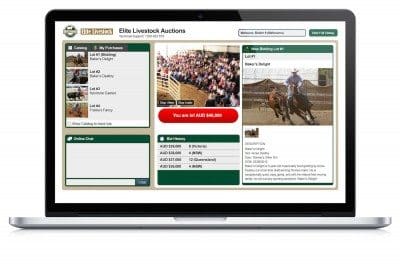 Elite Livestock Auctions has developed an app called Stock Live that allows users to bid on livestock at physical sales from an internet-connected device, such as a desktop computer, laptop, tablet or smart phone.

It uses an app called “Stock Live” which, it says, allows buyers to hear and see all of the live action via their desktop, laptop, tablet or smartphone and to bid in real time in competition with physical buyers at each auction.

Managing Director Chris Norris, a stud stock agent and auctioneer, said the US livestock industry has been selling cattle live online and via satellite television since 1988.

“However, now with the 3G, 4G and NBN networks rolled out across the country, we must embrace the advance in technology or get left behind,” he said.

“The internet is the fastest growing marketing tool to the auction profession worldwide, yet the livestock selling industry continues to rely on traditional methods.”

Mr Norris said the Elite Livestock Auction system supplies each vendor with a wide range of information about each registered online bidder, including not only who the successful online purchasers were, but also which bidders placed bids on which particular lots.

He said real time interactive simulcast bidding meant clients could bid on a bull at a sale in Western Queensland while they working at their own shearing in New South Wales or on a harvester in South Australia.

Another technology developer and provider in the livestock marketing space is Livestock Exchange, which produces specialised software designed to help livestock producers, livestock agents and saleyards to capture and manage data. The company’s software is currently used in around 100 saleyards across Australia.

As part of the research for this article Beef Central spoke to Livestock Exchange general manager Patrick Hutchinson about the company’s plans for future connectivity, market reporting and live broadcasting of sale events, which will be covered in a follow-up article in coming days. Stay tuned to Beef Central’s daily email to keep up to date.