NSW stockfeed source preserved for use by drought-impacted producers Grape marc in one of Tarac’s storage facilities

INCREASINGLY desperate New South Wales beef producers drought-feeding cattle across the state have been thrown a life-line this week, after a large by-product commodity dealer pledged to preserve its supply of grape marc for drought feeding use.

The company has a large stockpile of about 20,000 tonnes of the by-product from the last harvest at Beelbangarra, near Griffith in the northwestern part of the Riverina.

While it is not particularly attractive as a stockfeed commodity, spent grape marc is considered a useful source of roughage, and contains some energy and trace minerals (see details below).

Earlier this week, Riverina and Central NSW cattle producers battling severe drought became concerned that Tarac was considering a deal to sell its entire remaining stockpile – some 20,000t – to a single stockfeed company. Their concerns included the prospect that having cornered the market, the new owner would then turn around and try to sell it to droughted producers, at a considerable mark-up.

Emotion obviously plays a part in such concerns, particularly when producers have their backs to the wall under current drought conditions.

Tarac management yesterday removed any prospect of a one-off bulk sale of the material, agreeing to make the supply available to individual producers, under current terms.

The company said there had never been a decision reached to sell the stockpile to one entity, but indicated that discussions around the issue had taken place, after it was approached by a third party.

“The clear path forward now is that grape marc continues to be available to whoever wants to take it – until it is gone, obviously,” Tarac chief executive Jeremy Blanks told Beef Central.

Asked whether this decision was reached on compassionate grounds, or was a straight business decision, he said, “both.”

“We’re obviously aware that there are a lot of farmers in the region who are suffering severely from the drought,” Mr Blanks said. “That’s a very important consideration for us, under the circumstances.”

“As it’s turned out, this is a win-win situation for everybody”

However Tarac also had ‘significant reasons’ why it needed to move the grape marc off its site near Griffith – not only during times of drought, but also at other times.

“It’s equally important for us to continue operating, and fulfilling our environmental obligations,” he said. “As it’s turned out, this is a win-win situation for everybody.”

A small cost of $10/tonne is being charged by Tarac for its grape marc supply near Griffith, plus transport. A similar company storage site exists in the Barossa Valley in South Australia, but transport distance from here was much greater for eastern seaboard producers under drought siege.

While the current grape marc reserve at Beelbangarra was ‘about’ 20,000 tonnes, one onlooker said there was now a constant stream of trucks through the site taking loads for stockfeed every day, suggesting it may not last indefinitely.

At times of little or no demand from the livestock industry, Tarac said there were other uses for the material, such as mulch or soil improvement.

Constant stream of trucks at site

“It’s the best possible outcome, for drought-impact producers right across this region, and we sincerely thank Tarac for the result,” he said.

Mr Chase routinely uses grape marc as a paddock supplement, but ‘stepped it up’ considerably during dry times, and particularly during the current drought event. He carts the product about 400km for use on his Trangie property. That currently costs around $2200/load, delivered.

To this point, the product had been free, but he said he was happy to pay the $10/t charge now being applied, plus freight.

“In recent times, we’ve offered to pay for it – allegedly the same price as the intending buyer had offered,” he said. “There’s trucks everywhere down there at present, whereas in the past, we could turn up, get a load, and straight out.”

Mr Chase said he was concerned that the intending bulk-buyer of the material would be “profiting from other peoples’ misfortunes.”

“That supply is a lifeline for us at present. Without it, it’s likely we would have to sell pretty much every beast on the place,” he said.

“I don’t blame Tarac in any way for considering the bulk purchase offer. But I do blame the intending buyer, which was not an end-user, but a stockfeed company wanting to make money on the deal.”

Mr Chase said a Facebook campaign launched this week on the issue may have helped secure the supply for drought use by producers.

Some notes on feeding grape marc during drought

Grape marc is basically the remains of wine making. It consists of the stems, seeds and pulp after the grapes have been processed for wine.

It can be very variable in its feed value, and the moisture content can vary significantly depending on its processing method.

The energy and protein content is also variable. Tests by state Departments of Agriculture highlights the variation in feed values of grape marc. 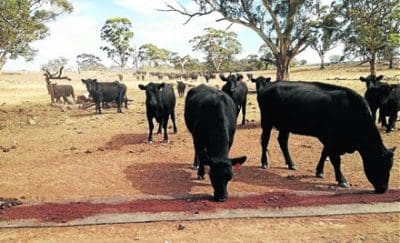 Grape marc being fed to heifers in southern NSW

NSW DPI figures indicate grape marc has an average value of 50.7pc DM; just over 13pc CP and around 6MJ of metabolisable energy (ME).

Effectively this means grape marc is a basic feed which can be used as a filler in a ration.

I reckon a lot of producers need to consider how cost effective this type of feed can be to their circumstances.  If feed is low in Dry Matter, e.g. 50pc then you needs to work out how much it is costing to actually get that feed home.

When you feed your stock, you are feeding a ration based on Dry Matter & MJ/ME  So in the case of that 55pc DM feed it might have 7MJ/ME, it works like this: 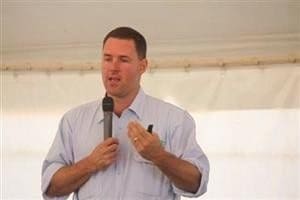 I reckon when you start looking at those quantities, and the costs associated with such a feed, you will quickly work out if it actually is the best option for you to purchase.

Grape marc is also a feed which can pose a residue risk to your stock.  You must ask for a Commodity Vendor Declaration form and make sure you keep a record of the vendor, the stock you feed and how much you feed.

The skins and seeds contained in grape marc can be risk for chemical residue.  The Victorian DPI notes some studies indicate oil soluble chemicals can be ingested easily from grape seeds to accumulate in fat tissue.

Dairy Australia has developed some suggestions for producers using grape marc, which is a handy reference.

As with any unusual feed, I reckon you need to weigh-up up the costs and the risks pretty carefully before you start using it. If you can’t get a Commodity Vendor Declaration for the products you want to use, then I reckon you should avoid using that feed.

If you do your homework and work out the options, then grape marc may be a good choice for you.  But don’t rush in until you’ve made a few inquiries and worked out if it is the best option for you.

If you are unsure about a feed, its usefulness or its suitability for your stock, make sure you get some sound advice before spending money or taking risks with it.  I reckon the drought is tough enough without the risk of feeding the wrong products.