JAMES Cook University has entered an agreement with commercial and research collaborators to develop and commercialse a ‘smart’ ear tag for livestock, that by 2020 could greatly change stock monitoring options open to cattle producers. 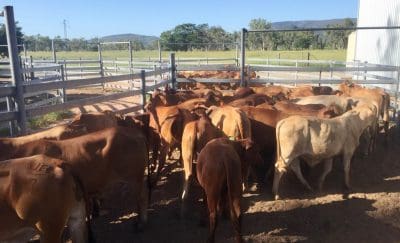 The project has received $1.5 million in funding support from the Queensland state government.

“The tag can be used to detect if animals stray outside a specified area, and can also be used for biosecurity monitoring,” Prof Atkinson said. The new tag will also be designed to be NLIS-compliant.

“That’s no easy thing to achieve in remote areas, in addition to it having the ability to function in busy places like feedlots as well,” Prof Atkinson said.

The new tag will require no battery replacement, being reliant on solar power, and switching itself on and off as required. Tag retention will also be a high priority during development.

Ceres Tag chief executive and development director David Smith said there was now opportunity to provide a customer with a guaranteed record of an animal’s entire life.

“Provenance is an increasingly important issue in many countries, and providing a guaranteed record of an animal’s location history increases its value,” he said.

The accumulated benefits of the new technology would be economic, environmental and social, Mr Smith said, in a joint statement.

“It will potentially have impacts through theft reduction, financial improvement, an increase in operational and land-use efficiency and animal health and biosecurity,” he said.

“There is potentially no bigger improvement to provenance and livestock management than what Ceres Tag will enable,” he said.

In addition to being NLIS compliant, the tag is designed to deliver advanced positioning location, movement and health monitoring using unique animal algorithms, underpinned by improved retention and energy harvesting.

“The Smart Ear Tag, which has enormous potential for both Australian farmers and the export market, is another sign of the way Queensland’s burgeoning AgTech sector is driving forward through innovation,” Ms Jones said.

Project partner Ceres Tag was one of eleven Queensland AgTech startups that recently travelled to Tel Aviv as part of an Advance Queensland-supported trade mission.

“This partnership, with CSIRO and James Cook University, is bringing together partners with a range of experience to focus on developing ground-breaking technologies,” Ms Jones said.

“The Innovation Partnerships program funding the tag project is part of the Queensland Government’s Advance Queensland $513 million whole-of-government initiative to transform the state’s economy, create knowledge jobs of the future and build Queensland’s reputation as a global innovation and investment destination,” she said.

Initial testing has commenced at the CSIRO research facilities near Townsville and commercial trials, on cattle like these, are anticipated within a year.

The group aims to release a commercial tag during 2020.