New French dung beetle to be introduced to Australia today 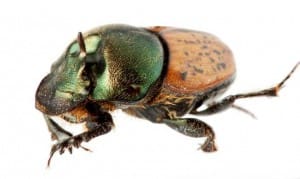 Bonjour monsieur: A male Onthophagus vacca, the species of dung beetle being released this week in Western Australia. Image: CSIRO

The average cow drops between 10 and 12 dung pads (also known as “pats”) every day and just one of those cow pads can produce up to 3,000 flies in a fortnight. With more than 28 million cattle in Australia, that’s a lot of dung and a lot more flies, which are a major nuisance for people and animals.

That’s why the CSIRO has spent the past 50 years researching how dung beetles can help clean up after Australia’s livestock. And it’s also why today – for the first time in more than 20 years – we’re introducing a new species into Australia.

Together they mark the latest in a successful Australia-wide scientific program, and fills an important gap in our dung beetle coverage in Australia, which not only reduce the number of bush flies, but also help return nutrients and carbon to our soils.

Why are dung beetles important?

Dung beetles provide many benefits. By burying dung deep below a pad, the beetles aerate the soil and deliver large amounts of organic material to depth, which promotes healthy soil life, improves the soil structure and promotes deeper rooting of plants. Burial of dung in the soil also increases levels of soil carbon, prevents nutrient leaching and runoff into our waterways.

The new species builds on a project that began more than 50 years ago when a team of CSIRO scientists first introduced dung beetles in response to a growing recognition that pastures can quickly become fouled and provide the ideal breeding ground for flies.

Between 1969-1987 (as well as 1990-1992 in partnership with WA Department of Agriculture and Food), CSIRO introduced 43 species of exotic dung beetle to Australia, 23 of which have established.

About half of them have spread about as far as we expected them to spread based on climate modelling (using the known distribution in the native range and matching this to the similar Australian regions), while the others have quite some way to go.

The goal is to have an Australia-wide “network” of dung beetles, working all seasons and in all regions to keep Australia’s pastures clean and well-fertilised.

However, by the late 1990s, it had become clear to many pastoralists that more dung beetle species were needed.

A 2007 study found there were gaps in the network. Australia’s tropical and sub-tropical cattle grazing areas are served by 7-13 species of dung burying beetles, but temperate pastures have fewer than four or five species.

Across southern Australia, most species emerge in late spring and are most active during summer with only one active during the autumn-winter period. The early spring gap in dung beetle activity also coincides with a spring influx of migrating bush flies (Musca vetustissima), which are regarded as a major nuisance pest for people and domestic livestock.

As a result, CSIRO identified two species, Onthophagus vacca and Bubas bubalus, that are active in the spring and applied to the Department of the Environment to have both species included on the list of species suitable for import.

How to import a dung beetle

With all permissions in place, newly emerged adults of Onthophagus vacca and Bubas bubalus were collected in southern France in the spring of 2012, 2013 and 2014.

Once collected, the beetles were cleaned and packed by CSIRO staff in France, then air-freighted to Australia and reared in the CSIRO Black Mountain Containment Facility in Canberra. The eggs were harvested and surface-sterilised following an agreed quarantine protocol, before their release for subsequent laboratory rearing.

But there’s a problem in bringing beetles from the other side of the world. Both species produce only one generation each year, and because they are active in the Northern Hemisphere spring, they were six months out of sync with our Australian season.

Dung beetle adults and larvae go into a resting stage over winter known as diapause. Diapause is triggered by environmental cues, such as daylight and temperature and is an adaptation that allows insects to survive unfavourable conditions. To reset the dung beetle’s seasonal clocks for the Australian spring, we used high temperatures followed by a short simulated winter. This also allowed us to rear two Onthophagus vacca generations in a year.

Release sites will be chosen by selecting sites across the predicted distribution on properties whose owners commit to doing everything necessary to maximise the beetles’ establishment, such as minimising the use of parasiticides, and ensuring livestock are present in the release paddocks each year at the appropriate time for beetle activity.

Jane Wright is a post-retirement fellow at CSIRO. She cooperates with John Feehan, proprietor of Soilcam Inc, and Bernard Doube, proprietor of Dung Beetle Solutions. She has received funding for dung beetle work from Meat and Livestock Australia and WA Department of Agriculture and Food. She is a Director on the Board of the Australian Entomological Society.