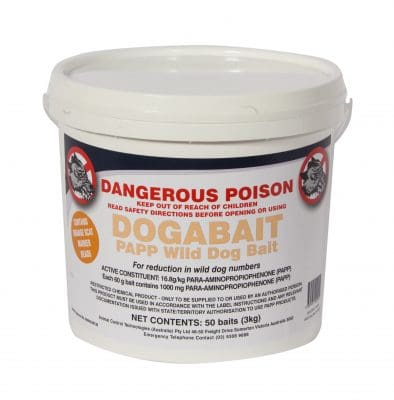 The first new toxin for foxes and wild dogs developed in Australia in 50 years was launched last week.

Unlike the main existing dog and fox poison 1080, the new para-amino propiophenone (PAPP) based toxin has a specific antidote, which can be used to save domestic dogs or other non-target animals that accidentally ingest the poison.

However, under current regulations, the methylene blue-based antidote can only administered by a veterinarian, and only has a short window of effectiveness after poisoning (How long? More detail below).

The antidote itself can be fatal to dogs if administered in over-dosage quantities.

Its current formulation and label requirements mean it can only be administered by direct injection into a vein by a licensed veterinarian.

Leader of the “Blue Healer PAPP antidote project” at the Invasive Animals CRC, Simon Humphrys, said training dog owners and farmers to administer the antidote to dogs by injection into a vein could be an option under certain circumstances.

“But we think there’ll be better ways to achieve a practical and effective outcome for dog owners and farmers,” he said.

Mr Humphrys said research is focused on trying to develop an antidote that can be used by farmers without needing a veterinarian.

“I would hope within the next two years we would have that through the registration system, but that really depends on us finding a route of administration that’s safe and effective,” he said.

“That’s the research that needs to be done over the next 12 months.”

Methylene blue can be purchased through chemical suppliers, however, only one antidote product, “Methylene Blue Injection”, is approved for sale by the Australian Pesticides and Veterinary Medicines Authority. As mentioned previously the product’s approval conditions restrict its use and sale to veterinarians only.

Mr Humprhys said the CRC is collaborating with Sydney-based pharmaceutical company Phebra to achieve a nationally registered product that vets can buy and use safely and effectively, and also to research and potentially develop a product that dog owners can use.

It was also working with Phebra to apply for a label change so the new dog-owner product, if and when it is developed and becomes available, can be called “Blue Healer”.

“It may be that the dog owner product is called Blue Healer and the currently available vet-only product name is left as is (Methylene Blue Injection) to distinguish the two.”

He said the CRC is also engaged with the Australian Veterinary Association to gain its endorsement of treatment recommendations.

“Through this process we’re aiming to have an approved label that’s as flexible as is practically safe, given (that) the risk of non-treatment is the death of the dog.”

ACTA was involved in the research that developed the new PAPP toxin, along with Australian Wool Innovation and the Australian Government through the Invasive Animals CRC. ACTA is also the manufacturer and distributor of the two new PAPP-based products released last week – Dogabait and Foxecute.

“If an untrained or amateur person tries to administer the antidote, there is a risk of giving too much and causing toxicity from the antidote which is powerful enough to kill the animal,” he said.

“Unfortunately there is a very narrow window between using the antidote to overcome the PAPP and killing the animal from the antidote, plus it only works by intravenous administration.

“They have tried other routes, but you can’t give it as a suppository, a tablet or as a drench.

“The poison works quite quickly and the symptom of the poison is the animal lies down and has a snooze, falls asleep and dies.

“So a lot of people would misdiagnose the animal having taken a bait with it taking an afternoon snooze.”

Professor Staples said what was needed was “something the farmer can use”.

“We all want that, but at the moment, technically, it’s not looking too likely.”

Professor Staples said ACTA had been under the impression that the antidote was “cheap, easy to administer and worked a treat”.

“But now we are finding out that it is a bit more complicated.”

He recognised that PAPP might not be widely used because of its cost and antidote issues, and the continued efficacy of 1080.

ACTA had hoped PAPP would be scheduled as an S7 poison and be more available to people in the peri-urban fringe, rather than a Restricted S7 in the same category and with the same access provisions as 1080.

The new baits could retail for about double the cost of 1080, depending on state access methods, retailer margin and pack size.

Geographic use restrictions are expected to be similar to those for 1080.

Professor Staples said in pastoral areas he would still advise landholders use 1080 baits because they are cheaper.

“PAPP works, but at an extra cost to achieve the same end-point in the pastoral country which should still stick with 1080 baits on the large scale.”

Chair of the National Wild Dog Action Plan stakeholder group Geoff Power said the PAPP bait for wild dogs was just another tool and was not a “silver bullet”, because of the restriction of its use to certain areas, its extra cost and the antidote issues.

“It could be handy, especially in inside areas where a working dog might take a PAPP bait and if the antidote is able to be applied within a certain time you would probably save the working dog.

Mr Power said the use of the PAPP baits would be restricted by the inability to distribute baits from the air.

PAPP is highly toxic not only to wild dogs but also domestic dogs, foxes, cats, and marsupial carnivores and can pose a risk to goannas, bandicoots and some birds, including ducks.

Aerial baiting is not allowed due to a lack of target-specificity.

Not can the toxin be used in peri-urban areas.

Wild-dog control measures for landholders would still rely on cluster and dog fence maintenance in SA, NSW and Queensland, and collaboration with neighbours on baiting and other control measures, he said.

“Baiting with 1080 is still important and trapping cunning dogs that don’t take baits – it’s not replacing anything, it is just an add-on to what we’ve already got.”

Mr Power said if PAPP users had a good relationship with their veterinarian it would make sense for the landholders to be able to administer the antidote.

“I can’t see why we can’t do that with the PAPP antidote.

“I don’t think it will be used widely at this stage.

“Firstly, there is the cost of it and secondly, the great advantage of being able to apply an antidote isn’t available unless you can actually apply it yourself.”

Farmer access to PAPP antidote “the way to go”

Farmer access to the PAPP antidote would “be the way to go in the long run”, he said.

In pastoral areas there would be insufficient time to get a poisoned dog to a veterinarian and owners also had to be vigilant to notice if their dog took a PAPP bait, Mr Cory said.

The new baits had proven to be highly effective in extensive field trials around Australia, Professor Staples said.

The PAPP chemical had been shown to be absorbed quickly from specially designed wild dog and fox baits developed by ACTA.

AWI On Farm Program manager Ian Evans said he was extremely pleased to see that the major R&D investment had resulted in an ‘on the ground’ product that farmers and land managers could use in addition to other wild dog and fox control measures.

“Wild dogs and foxes cause significant financial hardship not only to wool producers but to all livestock producers in Australia.

“Losses can exceed hundreds of millions of dollars to the agricultural industry and AWI is committed to supporting innovative R&D projects in this area.”

National wild dog facilitator for the IACRC, Greg Mifsud, emphasised that the new baits will complement existing control techniques, such as 1080 baits, trapping and shooting, to manage wild dogs and foxes within Australia.

“These new baits will enable a more comprehensive regional management approach to wild dog and fox management within Australia.

“We will always emphasise an integrated and coordinated approach to wild dog and fox control and there is certainly no one silver bullet to solve the problem but we welcome any new tools within the toolbox.”

Washing soda could save a PAPP-poisoned dog

If a dog accidentally ingests a PAPP bait, the dog’s owner may have somewhere between 45 minutes and 120 minutes to get it to a veterinarian for life saving treatment (depending on the size of the dog and the type and amount of bait ingested), according to Mr Humphrys.

The chances of a poisoned dog recovering successfully could be improved by administering washing soda to help expel the poison from the digestive tract and to aid circulation of oxygenated blood.

“One practical thing dog owners/farmers can do as soon as they see or suspect a dog has eaten a bait is administer 2-3 washing soda (sodium carbonate) chunks to dogs, just like they would a tablet,” Mr Humphrys said.

“Washing soda is available in most supermarkets in the cleaning section and this treatment is quite safe and effective at making dogs vomit, so a pack of washing soda crystals in the glove box of the ute might save the day, or at the very least buy you time to get to a vet.”

Early intervention after intoxication was critical.

Animal Control Technologies Australia said its 1080 and PAPP baits now incorporate “scat marker beads” to enable fast diagnosis of the type of bait that has been eaten.

This provides vets with an additional diagnostic aid to confirm lack of bait uptake in some unexplained dog deaths, or to indicate the best treatment to a working dog that has taken either type of bait.

Clinical signs include lethargy, ataxia, unresponsiveness, unconsciousness and death. Animals with PAPP poisoning also display grey-blue gums and tongue, caused by the change in blood colour from red to brown.

ACTA has previously said that a domestic dog could die within half an hour of ingesting a PAPP bait. However, the AVA said the carefully-considered PAPP dose in fox baits means an average-sized working dog would be less affected after eating one fox bait. But treatment should be sought immediately.

One higher-dose wild dog bait would be likely to kill a domestic or working dog within one to two hours if there is no treatment with an antidote, the AVA said.

The CRC is rolling out a number of events at field days in collaboration with ACTA, AWI and the National Wild Dog Action Plan to provide advice on PAPP use and integration with other tools.

For more information on purchasing the products visit www.animalcontrol.com.au