Singapore-based owner Bruce Cheung has spent around $20 million developing the operation since acquiring Pardoo Station in 2015, so far establishing about 20 centre pivots and a Wagyu herd comprising around 5000 breeders, in addition to a Bos Indicus based herd run on the property.

The long term plan is to have 6000 hectares of crops under irrigation and, in conjunction with the Pilbara pastoral sector, turning off 100,000 high quality Wagyu cattle by 2031.

The operation is proving it is possible to produce high value cattle from groundwater- irrigated pastures in remote northern Australia in a practical sense.

Proving it can be done in a commercially viable sense is a key challenge. 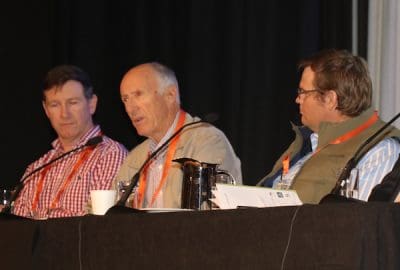 How much progress the business is making toward that goal attracted a lot of interest when Pardoo Beef’s technical and innovation manager Kevin Bell, a well known veterinarian and agricultural consultant, addressed the Northern Beef Research Update Conference in Brisbane last week. Many questions directed from the audience to a subsequent panel session were about Pardoo.

The operation is clearly working successfully on many fronts, but the key ongoing challenge is to find ways to reduce the currently high costs of production.

“We’re looking at pretty close to $5000/ha to run this at high output,” Dr Bell said in response to an audience question.

Running such a large number of pivots in northern WA environment required large amounts of fertiliser, labour and equipment, and costs were also exacerabated by extremely long freight distances.

“The costs are high because whatever you bring up from Perth you have to add $150 a tonne to it,” Dr Bell explained.

“Our cost of production is $4.50/kg of beef that we’re turning off.

“When I put my finger on this, I thought, well okay, what is the basic problem? And it is the cost of a megajoule of energy.”

The costs for the Pardoo irrigated beef operation compared with production costs of around $1.60/kg for leading pastoral operations producing breeders on grass in the area. Production costs documented in the South West Victorian Farm Monitor project, as a comparison, were around $1.67 per kg.

For a broader comparison, ABARES’s farm surveys data lists total costs of production (all cash costs, finance, depreciation and the value of unpaid labour) for beef cattle operations in southern Australia in 2017-18 at 233c/kg and in northern Australia at 197c/kg.

While the costs were currently high in the operation’s establishment phase, Dr Bell said he was very confident the operation will be able to reduce production costs significantly from current levels.

One example of where costs were likely to come down would be in the type of crops the irrigated enterprise can grow. State land use rules limit what can be irrigated in the region – Rhodes Grass is the current forage crop being produced under irrigation – but applications have been made for diversification permits which should expand the variety of crops that can be grown in future.

Dr Bell said the move to create a new industry in the region reminded him of the introduction of wheat crops in the southern WA sheep belt which were strongly resisted initially but now a very profitable system.