THE North Australian Pastoral Co is about to embark on a major productivity development project on a portion of its vast Alexandria Station on the Northern Territory’s prized Barkly Tableland.

The infrastructure project, combining a greatly expanded number of watering points and subdivisional fencing, is designed to spread-out grazing pressure across the country’s Mitchell/Flinders grass plains, and much more effectively utilise available pasture each year.

The $15-$18 million capital cost project will unfold on Gallipoli, an outstation on 8400sq km Alexandria. Gallipoli, which stretches 80 km from its western to eastern boundary, is located on Alex’s north-western corner, adjacent to the Queensland border.

NAPCo’s majority owners, QIC and members of the Foster family, who have been significantly involved in NAPCo for much of its 140 year history, agreed to fund the project at a board meeting held a few weeks ago.

The project is easily the largest capital commitment since QIC on behalf of clients took an 80 percent majority stake in the NAPCo business in July last year. It’s a good example of how as an institutional investor like QIC’s engagement in the beef industry is helping deliver productivity improvements that could not possibly be realised at the same pace under the former family-scale ownership.

While the term ‘intensification’ has at times been applied to similar projects across extensive northern Australian cattle regions, NAPCo’s chief executive officer Stephen Thompson feels the phrase does not properly capture the project’s purpose.

“We’d argue it is almost the reverse of ‘intensification’,” he told Beef Central.

“Currently, under extremely large paddock sizes as typically seen across the north, areas around watering points get very heavily grazed by cattle, while areas further distant from waters are under-utilised. Rather than intensifying the grazing process, this project will in fact spread the cattle out more evenly, and in fact relieve that heavy grazing pressure close to waters,” he said.

Pasture modelling suggests the project, when completed, will increase pasture utilisation on the Gallipoli portion from 15 to 20 percent. In return for that apparently conservative increase in utilisation, it will deliver a colossal 70 percent increase in carrying capacity.

As the table below shows, the Gallipoli project is expected to lift carrying capacity on the project  area by 18,000 Adult Equivalents (effectively, 15,000 breeders). The provision of an additional 218 watering points (just 55 currently service the same land area) will reduce grazing radius from 5km to close to half that. With just five paddocks currently in place across the 400,000ha project area, maximum paddock size will reduce from an immense 105,000ha to an average of just 1600ha, through the establishment of 248 paddocks using internal fencing. In turn, that means maximum stock per paddock will shift from 5500 head to just 135.

Mr Thompson said the figure of 18,000 Adult Equivalents was chosen as the target for expansion in this first project stage, because it represented the maximum potential expansion that NAPCo could ‘breed-up to’ itself within three years, which will maintain the herd’s superior genetic standard, while having no impact on continuity of supply to beef customers, like Woolworths.

Females to be joined at the upgraded Gallipoli site will be NAPCo’s unique Alexandria composites, developed over the past 30 years as Australia’s first corporate-scale composite breeding program, combining adaptation with meat quality and growth traits.

This retention strategy contrasts strongly with the nearby Beetaloo/Mungabroom development project, where the owners two years ago had to go into the market to buyer very large numbers of breeders to populate the newly-developed areas, at considerable expense, after project development.

To put the stage one Gallipoli expansion into some context, it was the equivalent to buying about five typically-sized backgrounding properties, Mr Thompson said.

The $15 million projected in capital investment would effectively unlock carrying capacity of 18,000AE, making a compelling financial case for the development.

The company had valued the project at about $50 million, comprising 18,000 head of additional cattle capacity at market value, plus the cost of water and fencing infrastructure.

Mr Thompson said the Gallipoli site was chosen for the first new development project, because it represented a ‘blank canvas’, and roughly 90 percent of its grazing land was a single land-type.

“With just five current paddocks, it represented an obvious target for this work, and the scale of this particular site matched our ability to breed-up to fill it within three years,” he said.

Continuation of a journey

Mr Thompson said the Gallipoli project, as important as it was, was really a ‘continuation’ of the productivity improvement journey NAPCo had been on for some time.

“Improvements in water infrastructure have been happening for quite some time, and the original owners, the Foster family, have had the courage to do different things in water improvements and the genetics program. It’s just that this is now happening on a larger and more rapid scale,” he said.

“But it’s not going to be easy. We’re expecting some setbacks and perhaps even some criticism. But there’s a determination to see it through – just like NAPCo did with composite genetics – it will make some big differences in the way we manage the herd.”

“For example, year-round mating is currently practised on Alex. Now with the greater level of control on Gallipoli, we will move into controlled mating, which will give much better outcomes. It’s not just a ‘numbers game,’ and the benefit will in fact flow right through the NAPCo business, as far as the Wainui feedlot and the customer, by removing some of the variation that currently exists in the business.”

The Gallipoli project is regarded as ‘stage one’ of a likely much larger development project for NAPCo, which is designed to unlock greater productivity potential across the company’s extensive northern pastoral assets.

Further stages may go ahead, once the Gallipoli site is ‘proved-up.’ Large additional areas on Alexandra are also good prospects for further development in similar fashion, as well as country on NAPCo’s Mittiebah station, another 4000sq km of similar country which adjoins Alex to the north.

Work on the project will kick-off early next year after the wet season, under the management of NAPCo’s chief operating officer, Geoff Cornford and Alexandria manager Tim Milne.

Stephen Thompson, who joined NAPCo as CEO in September last year, comes well-equipped to drive the Gallipoli project, having previously worked for retail tycoon Brett Blundy, overseeing the relationship between Mr Blundy’s business and John Dunnicliff, in the similar $40 million Beetaloo/Mungabroom infrastructure development project northwest of Alexandria. Mr Thompson had oversight over the project for its last two years, before joining NAPCo.

“This project is really about taking the learnings from people like the late John Dunnicliff, but then taking that much further, in integrating such investment in a portfolio strategy – not a single property strategy,” he said.

“The impact from this will be seen right through the entire NAPCo business. For example, we have taken the thinking from our backgrounding operations and will seek to apply similar practices back on Alex and Gallipoli which will assist further down the production chain.”

“An example of that will be pre-feedlot processing of feeder cattle back at the property of origin, long-before the cattle get to the feedlot itself. To do that we’ll use relocatable yards taken to the cattle, rather than the other way around. All of that is about improving productivity and performance,” Mr Thompson said.

“All the energies of the board are currently focussed on how we are going to operate this model to best advantage, as the project unfolds.”

The Gallipoli development will be ‘staged’ over three years, so that after a portion is completed, cattle will be moved-in, and development focus will shift to a new section. Not one new bore will be sunk as part of the project, but in fact the number of bores utilised for stock water will actually reduce, with poly pipe and tanks (replacing turkey’s nests) used to push water around in much more concentrated fashion.

The project is the latest in an ongoing series of productivity improvements being seen across Australia’s extensive northern cattle regions. Just yesterday, Consolidated Pastoral Co outlined to Beef Central how it is diverting funds from the sale of four properties last year into a development project which will expand carrying capacity by 30,000 head on northern properties (click here to view yesterday’s report). 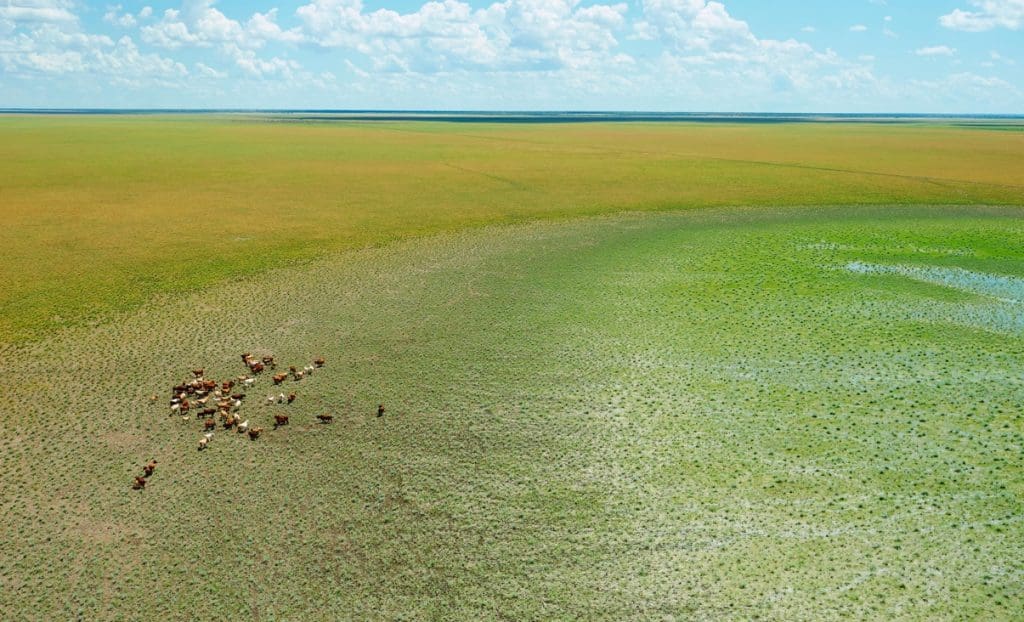