WHERE there is pasture dieback, there are usually mealybugs.

That’s the message from researchers at the Queensland University of Technology who are investigating the pasture mealybug, Heliococcus summervillei, as a causal agent of dieback. 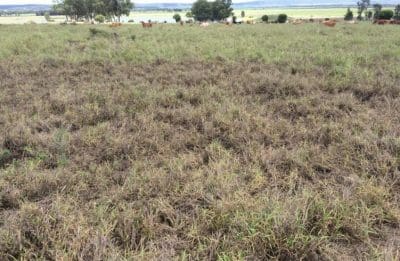 Pasture dieback is a condition which causes the death of sown and native pastures by affecting plant health and function, reducing the productivity of affected properties. It has been observed in a range of soil types and plant species across Queensland and northern NSW.

Researchers at QUT work with Queensland Biosecurity, which has already confirmed that the same species of mealybug caused pasture dieback events in Queensland in 1926 and the 1930s, in New Caledonia in 1998, and currently in Barbados and Puerto Rico.

Prof Hauxwell said the mealybug H. summervillei has been found at more than 40 sites with active dieback, from the Central Highlands of Queensland to northern NSW.

“There’s a significant correlation between the number of mealybugs present in a pasture and the severity of dieback symptoms in a range of grass species,” she said.

“We can reproduce the symptoms by infesting grasses with the mealybugs, and grasses recover if treated with systemic insecticides.

“We think that the mealybug weakens grass, making it less productive and vulnerable to infection, and in the right conditions (such as after rain) multiple grass pathogens pile in and kill it.

“It’s encouraging research because the more we learn about the mealybug, the more we can assist producers to monitor and manage them.”

QUT researchers monitored eight sites every fortnight for six months to show how mealybug behaviour changes by season, which will reveal the best practice monitoring and management practices throughout the year.

Be ready to monitor

Here’s a break-down of where mealybugs are found and possible seasonal management strategies throughout spring and summer:

From September, mealybugs can be observed moving to the surface of the soil and in the crown of grass. These are mainly mature, reproductive females, often along the upper edge of cracks in soil, under thatch and dense grass. Prof Hauxwell said producers should start monitoring at this stage.

It’s important to know how to find and identify the mealybugs.

“Using a hand lens, check for mealybugs in the soil around roots up to a few centimetres deep, in the crown and the thatch of the plant and under debris in the paddock such as cow pats and logs,” she said.

“We have a quantitative method using dug samples along a transect and can provide training.”

Once the rains and warmer weather combine, mealybugs begin to reproduce and numbers can explode.

“You have to be on the ball with monitoring at this stage as mealybug numbers can increase rapidly,” Prof Hauxwell said. “If you know where they are, you can manage them.”

At this stage, ‘crash and slash’ management is critical – graze down or slash to reduce the dense crown where the mealybugs reproduce and thrive.

Two insecticides, Movento and Imidacloprid, also currently have permits available for the treatment of mealybugs but do come with long exclusion periods.

“These are not for large area treatments, but if you monitor and you find patches of mealybugs feeding the leaf and crown, you can hit the affected area and several metres around it with insecticide, which will help to suppress and stop them spreading,” Prof Hauxwell said.

The QUT research has also focused on pasture improvements that can provide effective resistance to mealybugs.

“If you have the capacity to invest in improved pastures, there are a few options you can adapt to your property,” Prof Hauxwell said.

“Bluegrass, buffel and broadleaf paspalum are all highly susceptible to mealybug, but panic grasses are less so.

“Forage crops such as sorghum, barley, lucerne, desmanthus and brassicas are all unaffected and can provide valuable feed though winter or when dieback is severe.

“Increasing pasture diversity also appears to help. The mealybugs don’t feed on legumes, brassicas and other forbs, and adding these to existing pastures appears to have a significant benefit, reducing mealybugs and dieback symptoms.”

Prof Hauxwell said producers have reported that increasing soil phosphorus levels can have an impact on dieback.

“Phosphorus levels are often low, especially in old and burnt pastures,” she said.

Six steps to check for mealybugs in pastures

Quantifying the number of mealybugs in an affected pasture can help determine their severity and give graziers insights on how to manage them.

To check for mealybug numbers in pastures and count their numbers, producers should: