‘Make or break’ summer ahead for beef producers 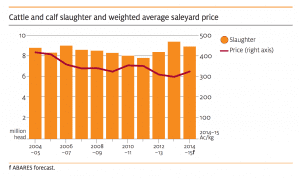 The latest quarterly commodity report released by ABARES yesterday highlights just how precariously balanced the current outlook is for many Australian cattle producers.

The spring/summer is shaping as a make or break period for most producers, with rain the key regulating factor that will tilt the scales either way.

This rise will be driven by a shortage of cattle relative to demand, as producers rebuild herds and also increase demand for restocker cattle.

However, if seasonal conditions fail to improve, the picture is less rosy.

Average saleyard prices would likely be ‘markedly lower’ than the 328c/kg forecast, ABARES says, as drought conditions worsen and force producers to continue liquidating their herds.

The chances of either of the above two scenarios eventuating are currently rated at roughly equal for most major cattle producing areas, according to the Bureau of Meteorology’s September to November 2014 rainfall outlook issued in late August.