DESPITE beef extension officers and supplement manufacturers talking about the benefits of wet season phosphorus supplementation of breeders in northern Australia for many years, adoption has remained low.

A study by Geoff Neithe in 2011 concluded that just 10 percent of northern cattle in P deficient areas received supplementation.

Commercial sales figures show that P supplementation is not happening at anywhere near the level that might be expected for the amount of P deficient country in northern Australia (see map of P deficient areas, click on map to enlarge). So it seems likely that the case for P supplementation has not been compelling enough for many northern producers to spend money on supplement. One of the contributing factors behind the lack of adoption is that there are currently no published scientific studies showing significant increases in pregnancy rates specifically from P supplementation.

As a result, extension officers and supplement manufacturers have had to give estimates of what sort of benefit producers might expect without hard data to back them up. The low rate of adoption suggests that this has not been convincing enough for many northern producers, but exciting new results from research at Kidman Springs (Victoria River Research Station) in the NT may change all that.

“Pregnancy rates from maiden joinings at two years of age were 10pc higher in the P+ treatment, but the big differences were seen after the heifers calved for the first time, when lots of phosphorus leaves the body in milk,” he said.

“The first lactation heifers in the P+ treatment were 120kg heavier on average than unsupplemented (P-) heifers when their first calves were weaned,” Mr Schatz said.

The average weaning weight of calves weaned from the two treatments was 34kg heavier in the P+ treatment and re-conception rates were 25pc higher. Also the total mortality rate over the three years from weaning until after the heifers’ first calf was weaned was 7pc lower in the P+ treatment (P+ = 1pc, P- = 8pc).

“All this adds up to a lot more beef produced per heifer mated in the P+ treatment,” Mr Schatz said.

“By spending an extra $41 per head on supplement over the first three years, the P+ treatment has produced about $300 per head more value so far”

He said the research team still needed to do a ‘proper economic analysis’ and hoped to publish the results in more detail soon.

“But the early indications are that the return on investment for money spent on P supplementation in the north is looking very good. By spending an extra $41 per head on supplement over the first three years, the P+ treatment has produced about $300 per head more so far,” Mr Schatz said.

“If the heavier weight of the females retained is also included, then it works out to be around $513 more per head.”

Mr Schatz cautioned, though, that the response would differ depending on the level of P deficiency present, and that benefits on the scale described above may not be seen where P deficiency is not as severe.

Mr Schatz acknowledged that putting out supplements during the wet season can be difficult, but said that some producers have found innovative ways to do it and usually “where there is a will there is a way”.

So if producers think that the benefits justify it, they are likely to find ways of supplying P supplements in the wet season.

The trial is being conducted at Victoria River Research Station about 220km south west of Katherine, NT. After weaning in mid-2014, 179 weaner heifers were allocated to two treatment groups (P+ or P-) and were then managed in exactly the same way except that their mineral loose lick supplement either contained P (P+) or did not (P-). The cattle graze in two adjoining paddocks of native pasture that are acutely P deficient (P <4 mg/kg). The treatments swap paddocks each year to minimise paddock effects.

The two treatment groups have been managed in exactly the same way since weaning except that their mineral loose lick supplement either contains P (P+) or does not (P-).

The lick is fed year-round in troughs under supplement sheds. The composition of the lick fed to each treatment is shown in the table below. 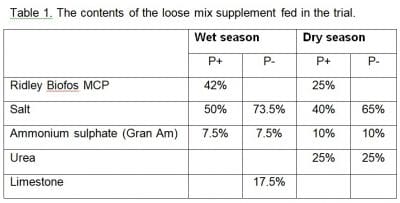 The trial is on-going and will study the benefits of P supplementation over several years.

The heifers are mustered twice a year for data collection and were first mated at two years of age (from late December 2015 to April 2016). So far performance has been observed from weaning until after their first calf was weaned in May 2017 at about 3.5 years of age.