Keep your eyes peeled for Pimelea 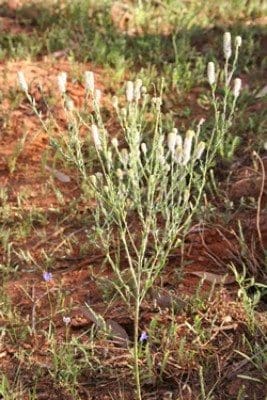 Producers are being warned that recent seasonal conditions could lead to growth of the weed Pimelea, which is poisonous to cattle, sheep and horses and is potentially fatal to cattle.

According to retired researcher Richard Silcock, an author of the Queensland Department of Agriculture and Fisheries Guide to Pimelea Poisoning of Cattle, the recent dry summer followed by autumn rainfall and prolonged cloud cover could see Pimelea incidence increase towards the end of this winter.

“Predicting when a large number of seedlings of any of the three poisonous species will establish is difficult. Therefore, field observation by the producer for significant numbers of young seedlings is a key requirement for management,” he said.

Dr Johann Schröder, MLA Project Manager Animal Health and Biosecurity, said while both cattle and sheep suffered intestinal irritation from ingesting Pimelea, the impact on cattle could be dramatic and result in death.

“It is far better to limit animal exposure to Pimelea, than suffer the consequences. There is information available to help producers manage this, including on the MLA website,” he said.

Here are the facts on Pimelea, compiled by Richard Silcock: