CONSISTENCY and attention to detail paid off for Inverell grainfed beef producers, the Lane family, when their Nullamanna beef supply chain business was crowned Woolworths Beef Supplier of the Year on Wednesday evening.

The Lanes travelled to Sydney for the Supplier of the Year awards, joining a group of 900 Woolworths food and grocery product suppliers for a glittering ceremony at the Luna Park Convention Centre. 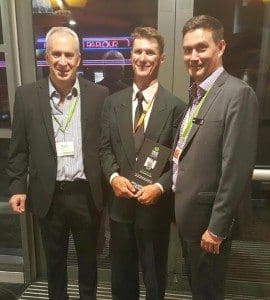 “We were completely taken by surprise when we were announced as the winners,” Peter Lane said.

The Lanes received the Pat Dempsey Memorial Trophy, launched last year in memory of the late Pat Dempsey, a senior figure in Woolworths’ red meat supply chain for 25 years, who was much loved across the Australian beef industry.

While the supplier of the year award selection assessment is based on a range of criteria, compliance against MSA and company specs is an important part of the process. The Lanes’ 2015 turnoff into the Woolworths program has averaged above 97 percent, against a program-wide average in the low 90s.

Nullamanna Feedlot is a vertically integrated beef operation that has held a Woolworths supply contract for the past ten years, consigning more than 5000 grain-finished steers to the program each year for slaughter at Tamworth.

Nullamanna Station has been held by the Lane family for 50 years and is located north of Inverell in the NSW New England district.

Brothers, Mark and Peter Lane have grown their business in conjunction with their expanding Woolworths contract, to the point where the operation’s 1000-head capacity feedlot today consigns two loads (about 100 head) of high quality MSA grainfed cattle each week. A few extra 100-day cattle are also fed, but the main focus is on the supermarket trade.

The Lanes have developed the operation from start-up, building their feedlot from scratch and developing the supply chain in conjunction with the Woolworths livestock buying team.

The property itself no longer runs any breeders, being used exclusively for backgrounding bought steers – mostly sourced direct from a 250km radius around the property, and occasionally topped-up out of local weaner sales. Peter and Mark Lane in the feedyard at Nullamanna. Photo: Bob Jamieson Agencies

The Lane brothers work on relationship-building with regular backgrounder cattle suppliers, in provision of feedback on both feedlot and chiller performance. The business tends to chase cattle of known prior performance.

Steers (mostly straight British or British crosses) are backgrounded on grass or winter forage crops for 90-100 days before entering the feed pens. Ideal backgrounder weights are 250-320kg, brought up to 350-380kg by induction. Depending on time of year, there can be anywhere from 2000 to 2500 backgrounders on the 2200ha property at any one time, running on either natural pastures or winter forage, plus silage used as a drought reserve.

The Lanes prefer to feed steers only, avoiding issues with pregnancy, plus added weightgain and feed conversion performance benefit, and reduced health issues through feeding male cattle only.

The majority of feedlot inputs are sourced from near neighbours. A dry-rolled wheat-based ration plus straw is fed, using bunks rather than self-feeders. Nutritional support is provided by Dr Rob Lawrence from Integrated Animal Production.

Given the breed type and location, the Lanes are strong followers of pre-vaccination programs for respiratory disease, administering two doses of Bovilis MH +IBR to all backgrounder cattle prior to feedlot entry.

“There is no doubt the investment is worthwhile,” Mr Lane said. “We tried taking it out of the animal health program for a period, but it produced a spike in BRD problems. It is now routinely applied to all backgrounders before entering the feed pens.” Feeders being pushed up a laneway at Nullamanna. Photo courtesy Bob Jamieson Agencies.

Peter Lane put the business’s win in the awards down to several attributes.

“Being a little smaller than some other Woolworths suppliers, perhaps attention to detail is a factor,” he said. “Because we are smaller, Mark and I and our employee, Jamie, are very hands-on. We have a vested interest in the outcome,” he told Beef Central.

“We pay a lot of attention to animal health practises and get good advice from our vet and nutritionist. They are both important contributors to the outcome,” he said.

Mr Lane said the key attraction in holding a Woolworths supply contract was the stability the process provided for the family business.

“We’re able to budget against forward contracts, and an important consideration – they don’t miss a payment,” he said. “Having that ability to supply a few cattle every week is both a challenge, but also an asset, and in this New England area, we have access to a lot of cattle that are suited to the Woolies market type, with a little earlier maturing type cattle, suiting the 70-day program,” he said.

“Nullamanna’s compliance to carcase specification and quality of MSA cattle along with their hands on approach to daily feedlot operations including design and operational appearance are amongst the best in Australia,” the judges said in the commentary surrounding Wednesday night’s award.

Runners up in this year’s Woolworths Beef Supplier of the Year were Ken Harris’s Avondale feedlot located west of Moree between Rowena and Collarenebri in NSW, and the North Australian Pastoral Co’s Wainui feedlot near Bowenville on Queensland’s eastern Darling Downs.

The Harris’s Avondale property was established by Ken’s father Bruce, and has fed cattle for Woolworths for the past 15 years.  The family started supplying 75 head per fortnight and at present deliver four loads of cattle per week.

The majority of grain and feedlot inputs used is produced on the family farms and surrounding local properties. The feedlot is managed by Sue Barnard, who heads up a team of six full-time employees. Livestock procurement is the responsibility of Andrew Pitman, and he and Ms Barnard’s teams’ attention to detail and compliance to Woolworths carcase specification has been excellent over the last 12 months.

NAPCo operates a vertically-integrated supply chain, feeding domestic weight cattle into the Woolworths program for more than 20 years. Feedlot managers Geoff Cornford and Howard Elliott and the team at Wainui supply about 230 cattle a week to Woolworths’ Churchill/Brismeat operations near Ipswich.

The company’s commitment to Woolworths to continue to supply quality cattle in difficult drought conditions over the past 12 months has been a testament to the efforts of the entire NAPCo team, the awards dinner was told.

“This long term partnership has seen both quality and supply numbers grow over the years and NAPCo is seen as one of Woolworths true long term supply partners,” national livestock manager Brett Thompson said.