HGP research could lead to different approaches under MSA

RESEARCH into the impact that different types of hormonal growth promotants have on meat tenderness is showing some encouraging early signs, suggesting some implants may currently be treated unnecessarily harshly under the Meat Standards Australia grading model. 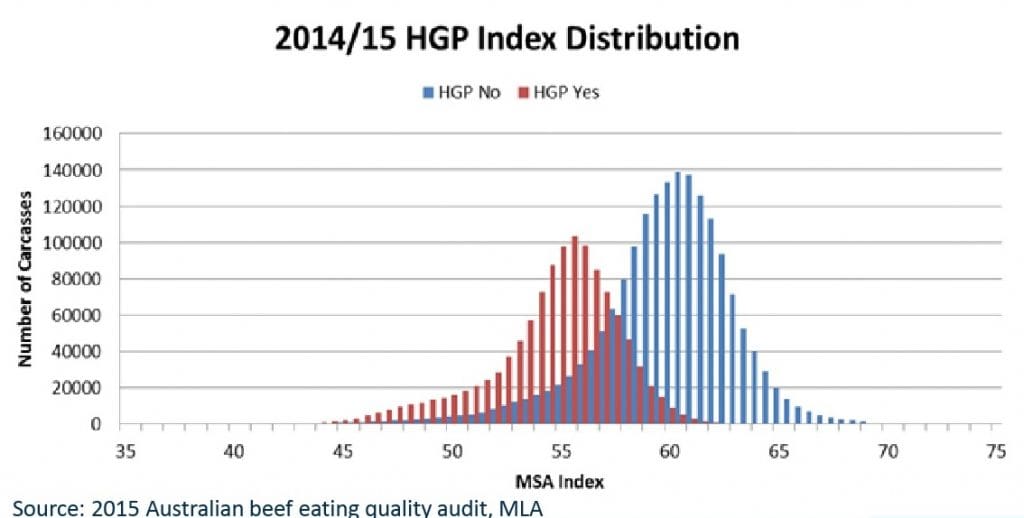 This current policy is based on a body of research work conducted in the mid-2000s, which showed, without question, that HGPs negatively impact eating quality. The good news, however is that despite the variance, the overwhelming majority of the red bell-curve still falls within MSA acceptable index perameters (48-52).

What that research work failed to address, however, was possible differences between the types of hormonal growth promotants available on the market. These range from so-called ‘soft’ implants based on oestradiol (naturally occurring oestrogen) to ‘harder’ implants based on trenbolone acetate (TBA), and combinations of both (sometimes referred to as ‘combo’ implants).

Implant manufacturers and other stakeholders maintain there are likely differences in eating quality impact between the ‘softer’ and ‘harder’ implants, while current MSA grading treat all HGP-treated stock as a ‘worst case’ scenario. Potentially, this may be unfairly limiting use of softer oestrogen-based HGPs in the marketplace.

The current HGP/MSA trail is working under the hypothesis that oestradiol-only HGPs (example, Compudose) have less negative impact on meat eating quality than combo or TBA implants.

The two-year trial is based on 500 composite steers sourced from the North Australian Pastoral Co.

About 300 of those steers went through a 73-day feedlot program at the company’s Wainui feedlot on the Darling Downs for domestic markets. They were divided into three groups – a control (non-implant) group, a second group receiving a 100-day oestediol implant, and a third group receiving a Component TBA/oestradiol pill.

MSA eating quality measurements are being/will be performed on all cattle involved in the trial, using striploins and rumps, aged either five days or 35-days. Importantly, the negative tenderness impact of HGP has been shown to be largely mitigated by extended aging. For example, a 10-point MSA index difference between treated and untreated animals after five-days aging, may reduce to a five-point difference after 21-days aging.

While the grassfed component are yet to reach slaughter, the grainfed steers were processed at Teys Beenleigh in November 2014. 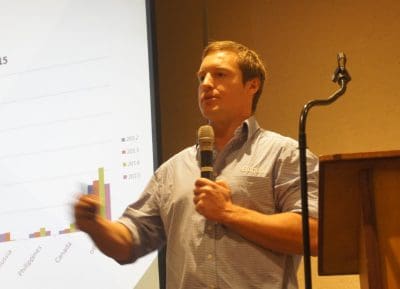 Early results from the grainfed portion of the trial showed that ‘soft’ oestradiol-only HGP implants had significantly less impact on eating quality than the combo (TBA/oestradiol) implants when used in feedlot finished steers, Mr Packer told the Rockhampton audience.

“It’s early days on the grassfed part of the trial, but oestradiol-only implants when used for a longer duration on pasture appear to have a larger impact on eating quality, relative to those on shorter grain-finishing programs. We are not yet sure how much bigger that impact is, as there is still a way to go on the slaughter of the grassfed cattle,” he said.

A project report is expected in a few months on the feedlot phase of the trial, while the grassfed component is not likely to be seen until next year.

“MSA is quite open to the prospect that if they find sufficient evidence from the trial, they will adjust the model to suit different HGPs,” Mr Packer said. “But it’s still very early days, and it’s important not to jump to any conclusions just yet.”

Maximising beef production in a year of desperate shortage

Especially in a year like this when the national beef herd has plunged to 40-year lows, it’s important that valuable production tools like HGPs are not being unfairly discriminated against in the MSA pathways model.

A 2013 analysis (cattle prices are dramatically higher today) showed that HGPs delivered 150,000 tonnes more beef to the Australian beef industry, worth around $172 million at the time.

Beef Central published this earlier report on grid discounts – or the lack of them – applied to HGP-implanted cattle across the Australian beef processing industry.

An MLA spokesperson said a final report from the HGP/MSA project will not be completed until mid-next year.

“Once we have the research and the science, then there is the MSA pathways and MSA Taskforce process to be completed to determine if any changes are needed to MSA,” the spokesperson said.

“There have been a number of studies completed earlier to determine the impact of HGP on consumer eating quality, but the previous work did not identify a difference between implant type. That is why this project was not industry-funded, but financed through the MLA Donor Company, and commercial interests including Elanco.”

At this point, there has not been a full scientific peer review of the study and no recommendations for changes to the MSA model have been made by the MSA R&D Pathways committee, as they await the outcomes of the grassfed steers in 2017.

Any future recommendations coming from the completed research would also be tabled at the MSA Beef Taskforce for final endorsement in order for changes (if any) to be commercialised through the MSA grading model.

“There is a clear process around the implementation of changes to the MSA program and it is too early to determine if this will be required in this case,” the MLA spokesperson said.