The operators of the Acland coal mine west of Toowoomba say an ongoing land rehabilitation trial has shown that previously mined country can be successfully used for cattle grazing.

However neighbouring farmers say the work needs to be viewed in the context that the mine has turned country that was previously best quality faming land “into poorer grazing country at best” (see more below).

Coal mining company New Hope has recently completed the second stage of trials designed to compare the performance of cattle grazed on rehabilitated mining land with cattle grazed on unmined land in the same area.

The trial was overseen by Armidale based agricultural consultants Outcross Agri Services and involved pasture agronomists, soil scientists, a veterinarian and an independent statistician.

Tom Newsome from Outcross Agri-Services said the trial was unique compared to the usual mining industry approach to land rehabilitation.

“Traditionally the mining industry focuses on an environmental outcome and not a commercial outcome as well,” he said.

“This project focused on rehabilitating the land so it can be used for viable and sustainable cattle production into the future.”

Four sites were used for stage 2 of the grazing trial.

Three were previously mined and subsequently rehabilitated and sown to sub-tropical pastures; each representing a different age of rehabilitation (2007, 2010, and 2012 respectively) and pasture establishment.

An unmined paddock, sown to sub-tropical pastures in the same year as the youngest rehabilitated (2012), was used as the control.

Acland Pastoral Company (APC) Manager Ben Muirhead said the cattle selected and monitored for Stage 2 of the trial (90 steers, 90 heifers) were selected on the basis that they were the same breed and bloodline; were a single year drop and were sourced from a single vendor.

“This ensures we are comparing the same breed, genetics and age for all beasts in the study,” he said.

The cattle were grazed on the trial sites over three separate grazing periods to reflect a commercial rotational grazing management system and to collect data across a range of seasons.

“Between grazing periods, all trial cattle ran as a cohort and were grazed on unmined sub-tropical pastures, planted in 2012.”

Mr Muirhead said Stage 2 of the cattle trials had also seen some refinements in the program from Stage 1.

“We broadened our testing program in Stage 2 to include both the soil and pasture performance as well – to gain a more in-depth understanding of the rehabilitated areas.

“We wanted to investigate the structure of rehabilitated soils compared to unmined soils,” he said. 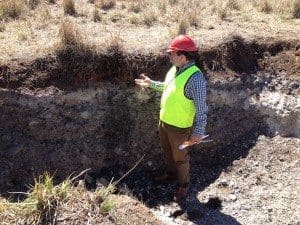 University of Southern Queensland’s Dr John McLean Bennett said it is early days yet in terms of the soil work as that will continue for another three seasons (years).

“Properties and profile characteristics of the control site and 18 nearby grazed soils (benchmark sites) were also compared to identify how representative the control site was of surrounding grazed land.

“To rehabilitate land, stockpiled soil is spread to a target depth of 30 cm onto deep ripped and profiled inter-burden (mine spoil) material before being sown to pasture species.

“Once established and considered stable, the rehabilitated land is used for cattle grazing.

“So far we have observed a comparable range of rooting depths in the unmined soils to rehabilitated soils.

“This suggests that the inter-burden (mine spoil) is capable of supporting the pasture.

“There was little difference in the measured soil chemical properties between the control and rehabilitated sites with regard to benefits or constraints to pasture production.

“On average, none of the tested rehabilitated sites and depths would be considered sodic or saline,” he concluded.

Col Paton at EcoRich Grazing, said the pasture data collected indicates that the rehabilitated pastures are as productive, and of a similar quality, as the control (unmined) pasture.

“Interestingly though results displayed from the rehabilitated pasture sown in 2010/11 indicate that the site is more productive than other sites,” he said.

New Hope established the Acland Pastoral Company in 2006, as a farming, grazing and land management enterprise based at the New Acland mine.

Historically cattle numbers have been 2800 head however due to the dry conditions numbers are considerably lower. In conjunction with grazing APC grows both fodder and grain crops in suitable areas.

“We have been happy with the advances we have made so far in rehabilitating the mined land to grazing status,” New Hope’s Executive General Manager for Mining Jim Randell said.

Farmers who have operated near the Acland mine since before it opened in 2002 say there is more to the story than New Hope Coal’s pasture rehabilitation trial announcement indicates.

Sid Plant and his family have owned and farmed beef and grain property Samarai for generations.

They say that while New Hope may have done more than some other mines to try to rehabilitate previously mined land, they have effectively turned what was ‘beautiful cropping land’ into poorer grazing country.

“The grades in some cases are much, much steeper than they were before, in some places two to three times as steep,” Mr Plant said.

“The land used for the control paddock isn’t as good quality as a lot of the land they have mined.

“There are also many unknowns about how the trial was conducted.”

He said mining companies were only required to put a very thin layer of top soil back over previously mined areas, some of which would have held more than a metre of top soil previously.

Mr Plant, who is also a pilot and climatologist, says he has flown over many coal mines over the years and says until recently very few were making clear attempts to rehabilitate former mining land.

On that score he said New Hope’s work at Acland was probably ‘better than the average’ for coal mines.

The Plants believe the trial is part of an overall public relations strategy by New Hope to gain State Government approval for Stage Three of its Acland Coal Mining development.