In this article prepared for the Queensland Gasfields Commission, Wandoan, Qld, grazier Richard Golden shares his experience and insights from dealing with two different gas proponents at the same time developing over 100 gas wells on his family’s cattle property. 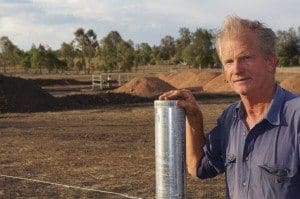 Richard Golden’s family run a Brahman/Hereford cross cattle breeding operation in the Wandoan district in the Surat Basin. Richard’s first exposure to the onshore gas industry came in 2008-09 when he took over negotiations for his father on a neighbouring block.

In 2012, as the gas industry boom took off Richard faced a direct approach on his own property from two different gas proponents and found himself negotiating access for a combined 88 gas wells with an additional 35 wells proposed by one of the proponents, taking the total to 123.

Despite what he described as ‘standout’ and ‘intelligent’ local land access officers at the time, Richard was staggered by how often the gas company lawyers in Brisbane simply ignored the advice from those local representatives who best understood the individual landholder issues.

Richard says it was symptomatic of their whole style and approach to negotiations at that time – ‘what do we need these landholders for, they are just an irritation’.

“It seemed the gas companies preferred to let their lawyers do the negotiations when they wouldn’t have a clue and made stupid errors that just frustrated landholders and destroyed goodwill.

“For example, their surveyors welcomed my involvement highlighting things about our property to improve the placement of gas wells – they listened and adjusted things – but they sent it to Brisbane and of course Brisbane just changed it.

“There was also a long delay and no communication from one proponent between the initial survey work completed in March 2012 and the issuing of the notice of intent to negotiate at the end of November 2012, just before Christmas and the closure of government departments.

“Their delay tactic included threatening to take us to the Land Court if we didn’t sign straightaway.

“It was almost like a legal department death wish – if they had only approached me in a more timely, intelligent and respectful way as the landholder, I wouldn’t have taken such a hard line in the subsequent negotiations with them.

Dealing with a new neighbour

Richard’s challenges with onshore gas companies weren’t limited to within his property, as one of the proponents had bought up a number of neighbouring properties and found he now shared a 22 kilometre common boundary with a new neighbour – a gas company.

He believes once the construction phase is complete, the company intends to lease all the neighbouring blocks – some 81,000 acres – in one parcel to one lessee.

“Given the size of the land package it’s likely to be leased to a large corporate or international tenant and I’m concerned that the biosecurity responsibility will be divested to the pastoral lessee not the gas company who owns and will be operating gas wells on that land.

“There is the potential that the gas company will bring the Parthenium weed problem and the lessee will have to deal with it,” Richard says.

Adding to his anxiety on biosecurity matters is that his property sits near the top of two major watersheds and he’s not confident their weed management systems will necessarily be effective.

Getting the right team together

Richard says in addition to pulling together the right team of experts, one of the most important tools he had as a landholder in these negotiations was the capacity to be able to recover the necessary and reasonable costs of this expert advice from the gas companies.

“You need to start as if you expect to end up in court – so our team of experts included a valuer, lawyer, land development specialist, animal behaviour specialist, agronomist, and even a specialist driller, and a noise, dust and light expert.

“Every single one of them was critical and fortunately I was able to drawn on my own formal land management background and practical experience to brief these experts on what we needed.

“I understand not every landholder might have the desire or the capacity to pull together such a team but there are more such experienced people out there now and I was confident I would get reimbursed for all reasonable costs.

“It’s rough and tough and not everyone will have the stomach for it – but it’s about getting the right people around you and I think even they (the gas companies) didn’t understand the quality of the team I had pulled together,” he said.

“They are the oil between the rough surfaces of the landholder and the company!

“These land access staff are the first and only point of contact with the gas company and are vital as they can help ensure consistency, familiarity and local knowledge.

“A good land access officer knows our property, knows our business and can communicate our issues through the right channels in the company in order to try and resolve problems.

Despite the high turnover of land access staff in the past, and more recent job shedding across the onshore gas industry, he reckons that land access staff can add multiple times their value to a project because they can help reduce disputes and subsequent costly delays.

Richard says of course the pressure doesn’t stop once you sign the Conduct and Compensation Agreement (CCA), in essence it’s really just the starting line.

He says landholders need to ensure a quality set of terms of access to your property in your CCA for the gas company and their contractors and they have to be enforced.

He has in place two identical Terms of Access (ToA) for the two different gas proponents developing gas wells on his land.

“We were not going to have two different sets of rules for access when both companies are doing the same stuff and in same catchment area,” he says.

“We also knew from other people’s experience that compliance on things such as biosecurity was appallingly bad so when we got signed up I asked my son to give up his building job in Roma to come home and help keep an eye on them.

“We had established two access points to the property and each evening he’d randomly pull people up (contractors) and asked for their weed certificates and initially there was up to 50 percent non-compliance – whether the certificate was out of date, had no date or simply invalid.

“Like the gas companies – different contractors have different values and perform differently.

“I recall one contractor who always did the right thing – instead of working to the lowest common denominator or least cost approach – his work was always exceptional and compliance unequal.

“However with up to 140 vehicle movements in and out of our property on a daily basis during construction, we found continual surveillance was necessary to enforce the terms of access in our CCA even though the gas company should be responsible for its own contractors.

“Despite almost ending up in the Supreme Court we got them (the gas company) to post a person 24/7 on the access points to our property,” he says.

He says like driver safety, compliance only works when there is a fear of getting caught.

As of July 2015, construction of the initial 88 gas wells on Richard’s property are almost complete and the surveying of the last round of 31 wells has been done. The focus now firmly on the rehabilitation of the land around well pads, gathering lines, roads and other infrastructure.

Richard says regular communication with the gas companies and their contractors is just as important during the rehabilitation stage of these projects.

“We hammered out some specific clauses in our CCA in relation to the rehabilitation stage including the process for companies to respond to any erosion, subsidence, weeds or other issues.

“We were fortunate to receive good gentle rains over late Spring and Summer and this combined with our rotational grazing practices has helped most pasture areas to re-establish quickly.

However, Richard expects they will need to continue to carefully manage and monitor that land rehabilitation over the next 10 years.

Running a cattle business alongside a gas field

Richard says the outcome of years of negotiation and engagement with the onshore industry has left him exhausted but he says he now feels he has the managed relationship between the gas industry and his cattle business on his property.

He says he had also learned a lot about himself in the process and to think more broadly about all the segments of his business including his land, water, cattle and so on – not just in terms of their dollar value but also their emotional value to him as a person.

He’s adamant that he still operates a standalone pastoral business – first and foremost I am a cattle producer and a landscape manager.

Richard feels that negotiating and managing coexistence with a gas company all boils down to a matter of trust. But he says, that trust is not just one way – “we as landholders also have to be trustworthy, not just the (gas) companies”.

Source: Queensland Gasfields Commission. This article is part of a series where landholders have shared lessons learnt with the GasFields Commission to help inform and assist other landholders and continue to improve understanding between the rural and onshore gas industries.