IS large-scale investment in fencing and waters development designed to lift cattle production capacity in Australia’s extensive north sustainable, or even justified, as a model? 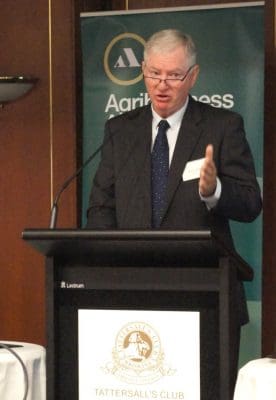 The question came up before former S. Kidman & Co chief executive Greg Campbell yesterday, while he was speaking to an Agribusiness Australia breakfast in Brisbane.

Mr Campbell started with Kidman as landcare manager in 1993, before becoming chief executive in 2001. Given his strong grazing land management credentials, it was not surprising that questions at yesterday’s breakfast started to zone-in on related topics.

Responding to a question about the amount of capital that had been deployed in northern pastoral regions in increasing watering points and subdivisional fencing, he said in the Northern Territory, Kidman had been in a position to look across a number of new investors’ ideas in the region.

“Developing additional watering points and sub-dividing paddocks has been an evolutionary feature of the cattle industry since its earliest days,” he said.

But some of these initiatives were aiming to develop watering points to the extent where cattle did not have to walk more than two kilometres to water, and to then try to fence the land up so that manageable units could be contained around those watering points. The idea then was to rotate cattle in some sort of cell pattern through those smaller paddocks.

“But for much of the year (wet season), it can be very difficult to get access to those sites,” he said.

“People who had made such intensification investments ended up having to shift cattle with helicopters, slinging diesel out using helicopters to pump water; and losing calves being bogged in the wet season, in paddocks that were exclusively on blacksoil.”

In one such case, a project which had government support was subject to robust government monitoring of pasture performance, the productivity of the cattle and animal welfare issues.

At the Australian Rangelands Conference late last year, one of the scientists involved in that monitoring exercise was asked about one of these developments, and how it had gone.

“She said it was a complete and utter disaster”

“She said it was a complete and utter disaster,” Mr Campbell said.

“It was a commercial, land management and animal welfare failure, and that the people who had made this investment had walked away from trying to manage cattle at this level of intensity.”

“While intensively developing northern country and sub-dividing it into small units is not recommended, there are many northern properties where further development of stock water, sub-division of paddocks, and investments in laneways and additional yards is genuinely worthwhile,” he said.

Mr Campbell believed ‘most’ of the extensive northern industry had now fallen back on a formula where cows are run under a grazing radius of 3km in treeless grasslands like the Barkly Tableland, and possibly 4km in some other land-types, particularly where there was shade.

“That means developing waters 6km apart on areas like the Barkly, as a sensible ambition – and having several waters in each paddock, so that the micro-management of cattle through the landscape is not time-critical.”

He said most investors these days perhaps did not have the cash to just ‘pour in’ the intensification necessary to deliver a 2km grazing radius for stock in the north.

“But some do, and have done it, but perhaps did not reap the rewards they anticipated. The suggestion that such intensification projects can double carrying capacity is complete nonsense,” he said.

He warned investors and their advisors at yesterday’s AA breakfast to be careful about some of the ‘spin’ that was out there about the productivity gains with more intense northern pastoral development.

“But equally, it’s important to be mindful that there are plenty of pastoral assets coming up for sale where genuine opportunity does exist to improve productivity, through some waters and fencing work.”

How to spend a million dollars?

Another AA breakfast audience member’s question asked how Mr Campbell would best allocate a million dollars, if it was provided for productivity improvement on a large enterprise in the north.

“I don’t think I would spend it all on one item,” he said.

“But from what I can see, the one thing that has the fastest payback in the northern industry at the moment is remote monitoring of waters. The technology there is improving quickly. There are now pretty robust satellite-based systems that can take a lot of vehicle miles and a lot of time out of the equation, in monitoring waters,” he said.

“The payback on most of this technology is about two years – and there aren’t many investments that will deliver that sort of return.”

The other area he nominate for some of the investment was genetic improvement, through implementing some newer genetic selection tools – to make sure the right bulls are going into the operation to begin with, and that maiden heifers are kept not because the ‘look good,’ but have a hair sample taken and their lifetime reproductive performance, as forecast by their genetics, forming part of the decision-making process on which females are retained.

“Both represent sensible expenditure, with good payback on a million dollar investment,” he said.

Mr Campbell said technology had now ‘swept into’ the cattle yards, much as it had across other parts of industry.

“It’s a new world, with live data capture through the yards, monitoring of watering points and satellite information on pasture quality having changed the nature of the industry. It wasn’t around 20 years ago, and if it was (as in satellite imagery) it was in a form that did not help management.”

“We’re doing so much more with the data at our disposal. Look at developments like Spacial Hub, a government initiative to bring various databases together on vegetation, soil, cadastral mapping and property boundaries together in a single resource, so producers ca log into it and use it as a planning tool.

“That’s just a massive improvement over this information being available only to those specialists who knew where to look, and how to use it. Similarly, pasture information coming out of Aussie Grass and those type of packages allowing producers to estimate pasture yields from rainfall driven models is available much more widely across all states.”

“All of that has come an enormous way in the past ten years or so.”