Feed or sell? Some kitchen table calculations to help with decisions MANY properties remain in the grip of drought, where rain has fallen follow-up is still needed and the Bureau is forecasting below average rainfall for most of Australia over the next three months. 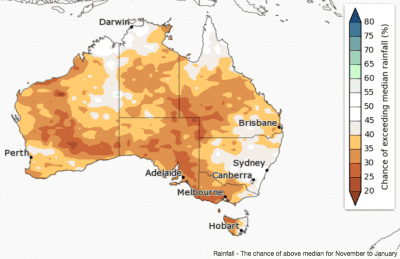 With hotter months returning it is now crunch time for many livestock producers, livestock officer Geoff Casburn told a recent NSW DPI Livestock Systems webinar, with decisions needed on whether to buy feed for the next six months or sell some or all livestock now.

One of the most important tool farming families have in making these assessments is their humble kitchen table.

“The first tool we have is the kitchen table and I can’t stress this strongly enough,” Mr Casburn said.

“Planning is best done with others, the kitchen table signifies that.”

“It is about sitting down all members of the business and your advisors and weighing up when the most likely planning period is going to be, what the best case and worst case scenario is, and then thinking about what are the most feasible solutions.”

All members of farming families worried about drought, and openly discussing strategies played an important role in helping all members cope with the pressure.

“A smart farmer once said to me a problem is only a problem when you’re not doing anything about it,” Mr Casburn said.

“So it is really important everyone in the family and the business understand how the problem is being addressed.

“And that way they can see that you are working through the process and it will help put people’s mind’s at rest.”

Here are some break-even calculation examples Mr Casburn offered to help cattle and sheep producers determine whether they would be better off selling some animals now and buying back when the drought breaks or whether it is better to spend money on buying in feed.

(Note: These are abbreviated examples – readers are encouraged to watch Mr Casburn’s full explanations in the webinar recording which can be accessed at this link)

Scenario one: selling or maintaining a sheep breeding flock 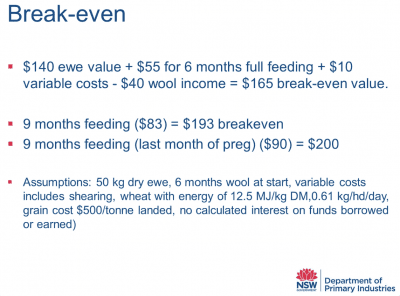 Current value of ewe at $140 per head

Feed cost per head for next six months: $55 (Based on feeding 600 grams per head per day of wheat with energy of 12.5 megajoules, using a grain price of $500/t landed on farm – calculated with Drought Feed Calculator https://itunes.apple.com/au/app/drought-feed-calculator/id921986324?mt=8)

Variable costs over next six months: $10 (includes shearing costs, which will produce $40 worth of wool per head)

Break even price of each ewe in six months time: $165

(Calculated by combining the current value of the animal plus feed costs plus variable costs, and subtracting the wool income received)

Should the drought continue for nine months instead of six, requiring feeding for that period, the cost of feed would increase to $83 per head, lifting the break even price in nine month’s time to $193 per head. As ewes would be joined during that period an increased nutritional requirement for the last month of pregnancy needs to be factored in, lifting feed costs to $90/head, resulting in a break even price in nine months time of $200/head.
“So now I am armed with this information I can think well, do I think a ewe that is late pregnant, is going to be worth more than $200 in nine months time or not, and I can make that decision whether want to buy or sell at the moment.” 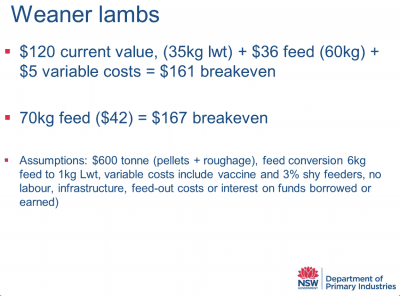 Calculation includes $5 worth of variable costs, including three percent of lambs being shy feeds.

Break even price at end of feeding period: $161/head

If the feed conversion ratio is not quite as good and 7kg of grain is needed to achieve every 1kg of liveweight, 70kg of feed would be required at a cost of $42, lifting the break even to $167 per head.

The above calculations do not incorporate labour, infrastructure, feed out costs or interest on funds borrowed or earned. 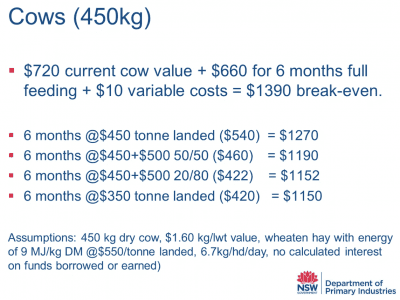 Outgoing to cost to feed and maintain cow or six months $660 (Calculated with drought feed calculator assuming wheaten hay with energy of 9 megajoules at $550 /t landed on farm, fed at 6.7kg per head per day)

“So we could either sell her now for $720 or we could feed her,” Mr Casburn explained. “If we can buy in animals less than $1390 at the end of the six months, in this scenario, we would be better off selling. If we can’t we might consider keeping them.”

The price paid for grain and the efficiency of the feeding system can have a dramatic effect on the break even calculations.

The above calculations do not include wastage of grain being fed out on the ground or grain that passes through undigested, which can be in the 15 percent range, and nor does it include calculated interested on funds borrowed or earned. 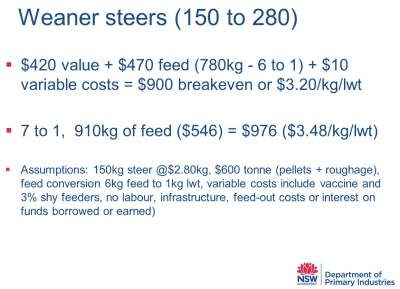 Less efficient feed conversion ratio of 7 to 1 would increase feed requirements to 910kg costing $546, for break even of $976.

To view Mr Casburn’s full presentation, which contains more detailed explanations about each scenarios and strategies, register and view the full webinar (which is free to access and view) at this link https://attendee.gotowebinar.com/register/5584469429386994947