3-NOP inhibits an enzyme that is crucial to the final stage of methane synthesis in a cow’s rumen. When this compound is fed to cattle, their methane production is inhibited. Photo: DSM

US research trials into the use of a feed additive designed to moderate greenhouse gas emissions have produced a 25 percent reduction in enteric methane in cattle.

The addition of 3-Nitrooxypropanol (3-NOP) to the feed of dairy cows was one of a series of Pennsylvania State University studies into the compound, which might be an early step towards approval for use in the livestock industry.

The 3-NOP compound inhibits an enzyme that is crucial to the final stage of methane synthesis in a cow’s rumen, researcher Alex Hristov, a distinguished professor of dairy nutrition with the university’s College of Agricultural Sciences said.

Significantly, the substance did not affect lactational performance of the cows and in fact increased their feed efficiency per unit of milk yield. The sensory properties of milk from cows fed 3-NOP and cheese made from the milk were not affected by treatment, the research found.

A natural by-product of digestion in ruminants, methane is released by cows into the atmosphere mostly through belching.

The results of 3-NOP trials are viewed by many scientists as critical, if the carbon footprint of dairy and beef cattle production is to be reduced to help slow climate change, Prof Hristov noted.

‘”3-NOP is the only substance that has worked significantly in reducing enteric methane in cattle and not had unacceptable effects on milk production or quality,” he said.

“We have tried many things in recent years – including essential oils, oregano and seaweeds (see more on seaweed additives below) – and they either have been ineffective in the long term or need to be investigated further.”

Crucially, 3-NOP is expected to be economical enough to allow farmers to use it, Prof Hristov said.

“It could be a game changer – but the question is, will the public accept it?” he asked.

“It’s a very small synthetic molecule that is metabolised very quickly and falls apart into compounds that are naturally present in the rumen of the cow. Consumer insight studies in the US, New Zealand and the Netherlands are showing considerable support for implementing 3-NOP,” he said.

Meanwhile, in another line of US research carried out at Penn State, supplementing cattle feed with seaweed could result in a significant reduction in methane, but researchers cautioned that the practice may not be a realistic strategy to battle climate change.

Asparagopsis taxiformis—a red seaweed that grows in the tropics—in short-term studies in lactating dairy cows decreased methane emission by 80pc, and had no effect on feed intake or milk yield, when fed at up to 0.5pc of feed dry-matter intake, Prof Hristov said.

It looked promising, and research was continuing research, he said.

However if seaweed feed supplement was to become a viable option to make a difference globally, the scale of production would have to be immense, he noted.

“With nearly 1.5 billion head of cattle in the world, harvesting enough wild seaweed to add to their feed would be impossible. Even to provide it as a supplement to most of the 94 million cattle in the United States would be unrealistic,” he said.

A recent back-of-the-envelope calculation carried out by an Australian lotfeeder suggested that, in order to feed the Australian beef herd of 26 million a ration including just 1pc seaweed, averaging 10kg of feed consumed per day (dry matter basis) would require production of almost 100,000 tonnes (dm) of seaweed per year.

Seaweed used in the Penn State research work was harvested from the Atlantic Ocean in the Azores and shipped frozen from Portugal. It was freeze-dried and ground by the researchers. Freeze drying and grinding four tonnes of seaweed for the research was “a huge undertaking,” Prof Hristov said.

“To be used as a feed additive on a large scale, the seaweed would have to be cultivated in enormous aquaculture operations,” he said. “Harvesting wild seaweed is not an option because soon we would deplete the oceans and cause an ecological problem.” 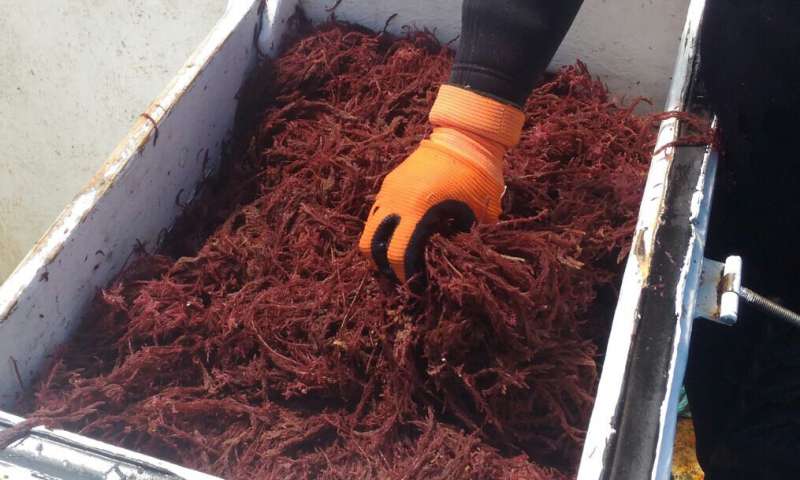 Still, the capability of the red seaweed to mitigate enteric methane as a feed supplement demanded attention, said Hannah Stefenoni, the graduate student working with Prof Hristov on the research project. The findings of their research were published recently online in the Proceedings of the 2019 American Dairy Science Association Meeting.

“Whether it is with beef or dairy cows, long-term studies are needed to see if compounds in the seaweed continue to disrupt the microbes’ ability to make methane.”

There were also questions about the stability over time of the active ingredients – bromoforms – in the seaweed. These compounds are sensitive to heat and sunlight and may lose their methane-mitigating activity with processing and storage, Prof Hristov warned.

Palatability is another question. It appears cows do not like the taste of seaweed. When Asparagopsis was included at 0.75pc of the diet, researchers observed a drop in the feed intake by the animals.

Also, the long-term effects of seaweed on animal health and reproduction and its effects on milk and meat quality need to be determined. A panel judging milk taste is also part of ongoing research.

“But methane from animal agriculture is just 5pc of the total greenhouse gases produced in the US. Much, much more comes from the energy and transportation sectors,” he said.

“So, I think it’s a fine line with the politics surrounding this subject. Do we want to look at this? I definitely think that we should, and if there is a way that we can reduce emissions without affecting profitability on the farm, we should pursue it.”

“And there may be a hidden benefit. It is pretty much a given that if enteric methane emissions are decreased, there likely will be an increase in the efficiency of animal production,” Prof Hristov said.