AS a fresh wave of extinctions sweeps through the ranks of Australian native animals, scientists are deploying their most powerful weapon yet in the struggle to understand and head off the wipe-out.

Progress in developing the first nationwide database of Australian mammal observations, and understanding what is driving the dramatic rate of disappearances, is being reported to a national conference in Canberra this week. 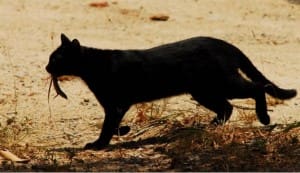 With a hundred marsupial species at risk of extinction across the continent, concern is acute over recent, sudden declines in small marsupial numbers in the tropical north, says Professor Chris Johnson of the University of Tasmania and an Australian Centre for Ecological Analysis and Synthesis Working Group member.

The ACEAS database, which now combines more than 600,000 records of Australian native animals across the continent, is proving invaluable in providing clues as to ‘whodunnit’ – who, or what, is behind the extinctions.

Professor Johnson says using the database, researchers have been able to compare the current wave of extinctions with earlier ones – and discovered some common factors.

“First, the extinctions are occurring mainly in ground-dwelling animals of small body-size which live in open, dry habitat. This points the finger of suspicion strongly at an introduced predator – the cat.

“We have seen similar extinction patterns driven by predators like foxes in southern Australia – so the big question was: ‘is history repeating itself, or is it something new?’”

The fact that the vanished animals are of small body-size points to feral cats as the main predator in the north, he says. In southern Australia, foxes prefer slightly larger prey – and these were the ones most likely to disappear.

However the ACEAS database also reveals major changes in landscape management which may be aiding the cats in their gruesome task of demolishing Australia’s native wildlife.

“Fire management, as practised in recent years, was opening-up large tracts of country – creating an ideal environment for cats to hunt in, along with other predators. However Aboriginal fire management burns much smaller patches of country, providing more areas for small mammals to hide in – so this may be one solution,” Prof Johnson said.

Changes in land use and management have resulted in more open country, where small mammals may be more vulnerable.

“It is probably no one thing, but the data points to a combination of several effects – all of which tend to favour the hunting style adopted by cats and place small ground-dwelling animals at greater risk.

“The information in the database has enabled us to understand exactly what it is that cats do, how and where they hunt, and why these changed conditions favour them. This gives us a much better idea of how to tackle the problem.”

Demand for knowledge among land managers

Professor Johnson said there is growing demand from cattle producers and other land managers for better advice on how they can help to protect native animals, and this is starting to emerge from the mass of data.

The database, delivered through the ACEAS web portal, is the first comprehensive information source for Australia-wide mammal presence and abundance, and is becoming a primary tool for investigating declines and fighting extinctions across the continent.

One of its most important uses will be to map future impacts of climate change on Australian animals, identify places where they may be able to find refuge and build national conservation plans and policy around these.

For example, a radical map produced from the ACEAS data shows where and how far ideal habitats for various animals are likely to migrate across the landscape in the coming sixty years. This suggests that in some cases animals may have to move several hundred kilometres from their current range in order to have a chance of surviving the effects of increased climate variability.

The Australian Centre for Ecological Analysis and Synthesis (ACEAS), is the nation’s leading facility for assisting scientists and managers to collect and analyse ecosystem data to help design better conservation policies at local, regional and continental scales.