Conducted by the Darling Downs Branch of the Australian Stock Horse Society, the sale saw 196 registered ASH change hands for an $8732 average, producing a clearance of 84 percent. 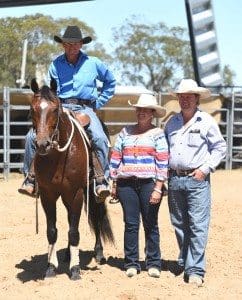 Selling agent GDL generated a record turnover from the sale of just over $1.7 million, while more than 400 bid cards were registered for the sale, also a record.

Geldings sold to a top of $15,000 for Bungaban Barney Acres, a five year old chestnut offered by Jay and Kristin Pearce, Wybara, Roma and purchased by Will Durkin and Rachel Dillon, Clermont.

The 38 horses sold in the Twilight portion of the catalogue averaged $8789, with a clearance rate of 86pc.

The $43.000 top priced mare at this year’s Dalby Stock Horse Sale is put through her paces by Claire Brown. Picture: Margaretta Travers.