Trails during December were carried out on flat grazing land at Belmont near Rockhampton in hot, humid, wet-season conditions.

As can be seen in the animal distribution maps published below (individual animal positions marked in red), the trial clearly demonstrated effective fencing of animals into grazing ‘cells’ within a larger paddock, using virtual fence technology. 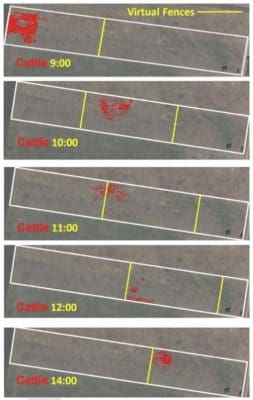 The series of trials varied from the ‘erection’ of single and double virtual fences, through to dynamic grazing and virtual herding (mustering).

Cattle were remotely monitored using the eShepherd system from 2000 km away, demonstrating one of the key features of the virtual shepherding system – remote cattle management. eShepherd is a collar and an app that enables livestock managers to fence, move, or monitor their stock using their smartphone – from anywhere, anytime.

Cattle breed types in the trial ranged from bos indicus to bos taurus, from six months to 11 years of age. All cattle were trained to respond to the virtual fence proximity cues within 24-48 hours.

In the virtual herding trial, cattle movement was automated. The trial demonstrated the process of relocating cattle from one end of a paddock to the other, using a virtual boundary.

The grazing cell boundaries ensured cattle had access to water during the entire period.

With the successful completion of the Belmont trial, Agersens is now moving towards a product launch later this year.