A two-day day program featured guest speakers on wide-ranging topics, and a rare chance to interact face-to-face with fellow CPC staffmembers – both from head-office and across the stations.

One of the speakers to leave an impression on managers was former New Zealand farmer of the Year Doug Avery, who led a session on innovation in agriculture.

More than 60 station managers and their partners, plus board directors and other stakeholders closely aligned with the CPC beef and live export supply chains were in attendance.

The program culminated in an awards dinner held at Brisbane’s Rydges Hotel on Friday night.

Season-wise, CPC’s far-flung northern properties are a mixed bag this year, with some managers from the NT and VRD regions reporting ‘once in ten year’ seasons after big wet season rain, while others in western Queensland face a very tough lead-in to autumn.

Providing a great light hearted end to the two-day conference was Australia’s Lambassador, Sam Kekovich who kept the crowd entertained in his own inimitable way.

Tomorrow we feature one of CPC’s station managers heading off overseas next week to further his education about grazing land management.

Here’s a selection of images of award winners from the night (click on image for a larger view: Station of the Year award went to Jimmy Beale and Shannon Chatfield from Bunda, NT 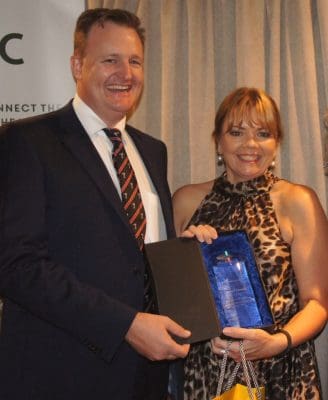