AFTER being named a finalist last year, Boonaroo Angus of Corndale in South Western Victoria has stepped up to take the title of 2016 Champion in The Royal Agricultural Society of Victoria Heifer Challenge finalised on Friday. 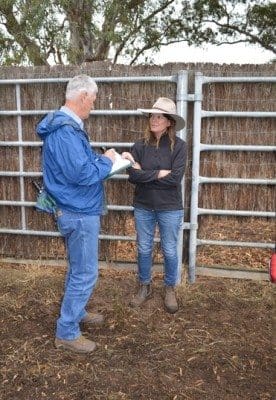 The 1600ha property located near Hamilton, run by owners Shane and Jodie Foster, has been in operation for 12 years and also produces prime lamb.

Experienced cattle judge Bob Dent, who has previously presided over competitions in the US, New Zealand and Brazil as well as all mainland states of Australia, awarded the prestigious honour and $3000 cash prize to the Angus stud, after almost two weeks of judging herds from almost 50 properties across Victoria and NSW.

RASV chief executiveMark O’Sullivan said the Heifer Challenge highlighted the quality of the herd replacement females in seedstock operation throughout the regions, and the calibre of competition in 2016 was outstanding.

“Congratulations to Boonaroo on being named this year’s champion, from a high-calibre list of entered properties. Being a finalist last year and now taking the top title is evidence of Boonaroo’s consistent quality and commitment to improving their cattle, property and operations,” Mr O’Sullivan said.

“RASV is committed to supporting regional and on-farm events, which complement the full schedule of livestock competitions held during the Royal Melbourne Show.”

Five of the ten 2016 finalists were also named in the top ten in 2015, including reserve champion Ray Brook from Eloora Shorthorns, of Bulart, Vic, who received a $1500 cash prize as part of presentations during the Beef Week Celebratory Dinner at Silks in Bendigo on Friday. Sample of Boonaroo heifers entered in the Heifer Challenge competition

Speaking after the completion of judging, Mr Dent said he was impressed with the high standard of competition due to the quality of entered herds.

“The standard of entries was a credit to the breeders. Most of the teams were highly productive, maternal and well-grown heifers,” he said.

With more than 50 entries in 2016, the Heifer Challenge recognises excellence in herd replacement females in seedstock operation throughout the region, with participants required to display pens of 10 registered heifers for judging, which took place over nine days from 27 January to 4 February.