ONE of Australia’s most intrepid invasive animal researchers, the University of Southern Queensland’s Dr Ben Allen, has been awarded the inaugural Dave Choquenot Science Prize for developing and implementing strategies which are leading the way Australia is dealing with wild dogs, feral cats and more. 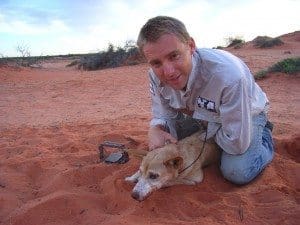 Presented by the Invasive Animals Co-operative Research Centre at a ceremony in Canberra last week, the award commemorates the life and work of esteemed natural resource management Professor Dave Choquenot, who died earlier this year.

“I just love quietly working in the bush to produce applied science that’s makes a difference to the land and landholders, so it’s a great surprise and honour to be awarded the IACRC Dave Choquenot Science Prize,” Dr Allen said.

“I’ve been lucky to be involved in some of the highest-quality wildlife research projects ever undertaken in Australia, and this award represents hard work from a great many people who continue to deliver solutions to Australia’s invasive species problems,” he said.

Dr Allen’s work in trapping, tracking and photographing invasive animals has taken him to remote Great Barrier Reef Islands, arid zones, grassland grazing areas and peri-urban regions, and part of his current research focus at USQ is centred around developing his FOFI5M strategy.

FOFI5M stands for five pests out, five threatened species in, and five million sheep for Queensland, because productive livestock properties can make great reserves for threatened fauna once pest animals are sorted out,” Dr Allen said.

It may be ambitious, but it’s a strategy Dr Allen believes is achievable as graziers and others join forces to cluster-fence their properties to stem the impact of wild dogs and other invasive animals as a matter of urgency.

FOFI5M has attracted a lot of interest from landholders, government, and industry bodies, and shows the kind of initiative that has won Dr Allen the Dave Choquenot Science Prize.

Other projects Dr Allen is working on include feral goat eradication on tropical islands, the ecology of Singapore’s stray-dog population, and developing strategies to better manage dingoes and other dogs in remote indigenous communities.

“I’m glad to be working as part of USQ’s Institute for Agriculture and the Environment because of its ability to deliver applied research solutions to some of Australia’s biggest wildlife management issues.”