Outlining key messages from the study in an MLA webinar held last night were Sandy McEachern and Peter Havrlant from Aggregate Consulting.

Mr McEachern said up to 70 or 80 different benchmark results were routinely recorded across each enterprise, but the webinar presentation touched on some key numbers only to build an overall picture.

The project has recorded production and profit performance on 105 beef herds across southeastern Australia, extending from western regions of South Australia into Victoria, Tasmania and across all eastern parts of NSW. Average rainfall across the group was 11pc above average for the year. Herd were 78pc Angus based, with some crossbreds, plus some Hereford and Charolais influence.

The quality of the season last year was reflected in an average 6.9pc increase in herd size across the reporting period – regarded as a ‘very significant rise’.

Perhaps not surprisingly, Mr Havrlant said the 2020-21 benchmarking year for both beef and lamb had been the most profitable seen in the 25 years the project has been running (see beef graph, and location map marking distribution of participants). So what have been the key drivers of that record performance?

By far the biggest factor between the most profitable producers and the rest was income generated, or $/DSE, driven in part by record highs experienced for young cattle over the past 12 months.

Productivity also had a role to play, as did management of supplementary feed and wage costs.

“It’s not just about productivity, but finding that balance between cost management and profit,” Mr Havrlant said.

Over the past 25 years, there had been periods such as the early 2000s where southern beef producers had been really squeezed to earn a profit margin.

“We’re fortunate in beef that the recent jump in price has not been accompanied by a similar increase in cost of production,” he said. “With a favourable production environment driven by seasons, conditions don’t get much better than they currently are for the industry to capitalise on high beef prices.”

“We know fertiliser prices will increase in the coming period, but it is about that discipline to capitalise on good conditions in the market now, and set ourselves up for the future.” 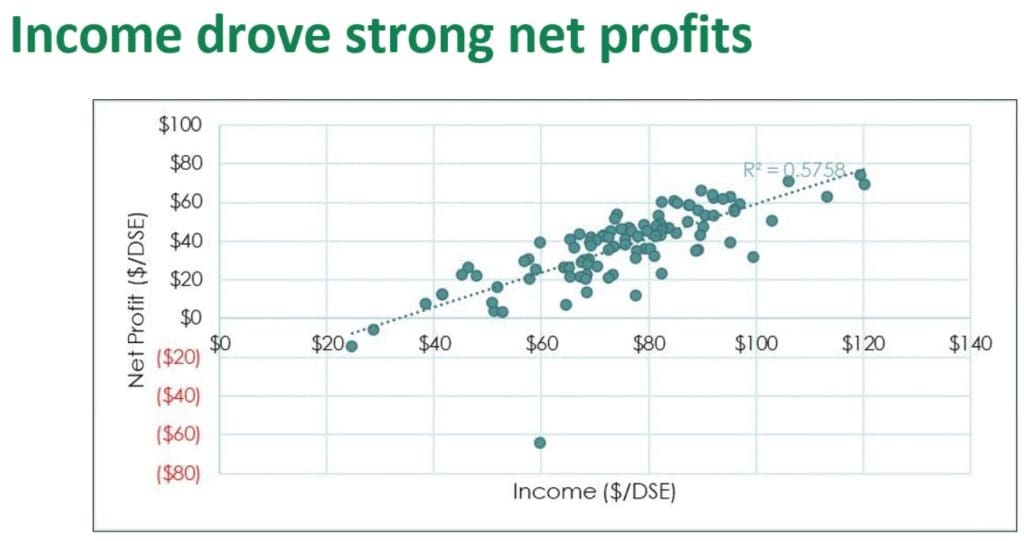 While average net profit across the benchmark participants was dramatically higher this year (average $37.30/DSE), there were still big variations between best and worst performers.

The graph below shows that the top 20 percent of herds averaged $60.97/DSE – not far off double the overall average – while the bottom 20pc, while still making a profit, averaged just $8.92/DSE.

“It’s a huge contrast between the groups,” Mr Havrlant said.

“When we dig down into the simple principles of what drives income, it is pretty clear to see. The difference between what the top 20pc did and the average was that they added another $19/DSE income, and earned $40/DSE more than the bottom 20pc.”

“Again, it was about finding balance in the business, and that mainly came down to supplementary feed spending last year,” Mr Havrlant said.

“We’re not talking huge numbers here, but as we follow this process through, these small dollar savings do add up to being significant, in terms of overall net profit/DSE.” Mr Havrlant noted that the net profit difference last year between the top 20pc and the average was a lot closer than in previous years’ benchmarking results.

“When we looked at who was in the top 20pc, we saw a fair bit of movement, in and out. These businesses were historically strong performers with good cost management.

“Burt what we saw within the herd rebuilding trend (average 6.9pc last year) was that some herds grew by 15pc or more – that’s fairly significant, and it has an impact on income/DSE.”

He stressed that the results were not based on a realised sale value, but a very conservative valuation of $1800 on cows and $1700 for heifers. That meant that some businesses probably had an understated profit for the year, for the purposes of the project. But equally they would be in a strong position to capitalise in the coming season.

“Is this the low-hanging fruit for performance improvement?” he asked.

“The data tells a story. In the past, when beef producer margins were tough, it was survival of the fittest, which drove some pretty good gains in labour efficiency.”

“We were sitting as low as 19,500DSE per labour unit, and have built ourselves up, in a long-term trend (see graph)” 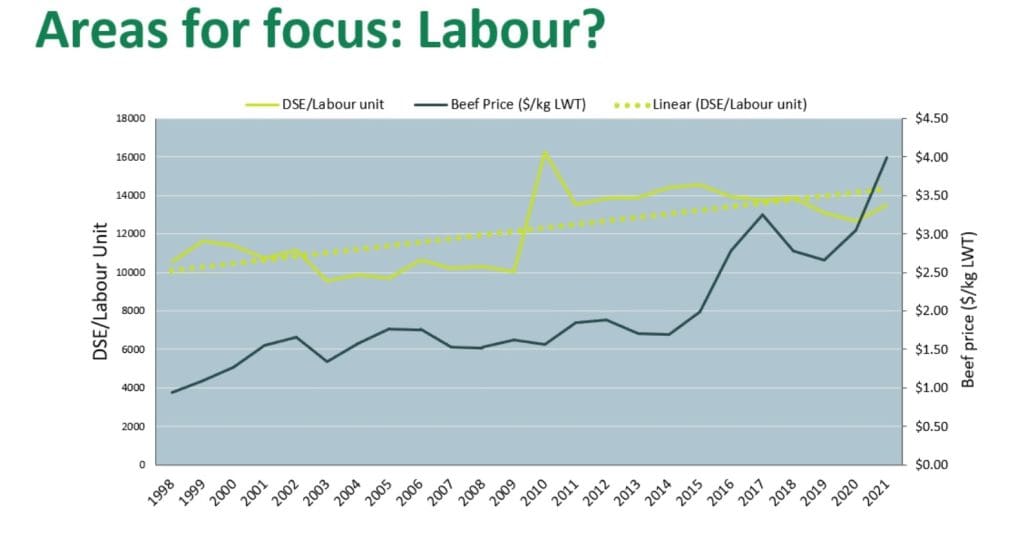 But in the past two years, while there has been a huge uptick in cattle price, labour efficiency among the benchmark contributors has actually dropped (yellow solid line), below the long-term trend.

“Obviously everyone is optimistic about current conditions in looking to increase herd numbers, but potentially there is some slippage there in terms of labour efficiency. It could be an area for refocussing.

“Also with these record profit margins, it gives a good opportunity to set ourselves up for the future, in terms of labour efficiency. Is there investment in any labour savings, be it around cattle handling, laneway systems or fencing that can add value to your business in the future?”

Another area for labour issues was calving patterns and timeframes.

The most labour-efficient businesses surveyed tended to be the spring calving systems, targeting the feedlot market.

“It seems to be infinitely scaleable,” Mr McEachern said. “We do see good businesses in other production systems, but the labour requirement to achieve that level of profit tends to be a lot higher – an autumn calving system targeting the vealer market, for example.

“It can be done well in terms of labour, but usually only at a small scale,” he said.

Despite the huge changes witnessed in cattle price and profitability, the benchmark results were still showing big potential opportunity in labour saving between the average cattle enterprises contributing data to the project, and the top 20pc, Mr Havrlant said.

“If we drive income/DSE and focus on productivity, and we’re diligent with our cost control including labour, these few cents can become dollars quite quickly.”

A range of questions from webinar participants followed, on topics including supplementary feeding costs, labour cost impact and cattle values.

One listener asked whether stocking rate was a significant factor in southern Australian profitability assessments.

“Yes it is, in all livestock systems,” Sandy McEachern said.

“But it’s not stocking rate, for stocking rate’s sake – it’s about utilisation of the pasture you can grow. The primary driver is always the number of animals, and then how well those animals do. You can’t push animals beyond the point of being productive, but getting enough on for the pasture you grow in a year is of primary importance.”

Another listener asked whether some of the top performers had made more dollars/DSE via the sale of PTIC heifers and females with calves last year.

“Definitely there has been value in PTIC females,” Mr Havrlant said. “Again, it is about getting the right mix for each enterprise.

In the period of very high replacement cost when buying PTICs, it had had an influence on profitability. But equally, there had been more purchases of PTIC animals than sales among the benchmarked herds recorded in the past year.

“Where they were there, you could definitely see the added price per kilogram,” Mr McEachern said.

“But it’s very inflated currently, by historical standards. I tend to think it will return to type, as the cattle supply increases. It will probably revert back to something much closer to slaughter values in future – but how long it takes to get there is probably the key question, and I can’t answer that.”

Another listener asked that given the current price of phosphorus of $5-6/unit, where the likely return on investment would be for new pasture establishment or upgrading at $400-$500/ha.

“We look at that figure regularly, because it’s a key investment that clients consider making,” Mr McEachern said.

“ROI on pasture establishment hasn’t really changed much, even though livestock prices have changed substantially. When a new pasture is established, there is a significant amount of opportunity cost involved, while it is being left to establish. If I was running 10DSE/ha, and generating gross margins of $80/DSE, then I’ve missed $800 worth of income while waiting for that pasture to establish. While we haven’t re-calculated the numbers based on this autumn’s fertiliser prices yet, on balance, things haven’t changed a lot.

“But as a number to work off, if you don’t get a 4DSE/ha increase, and that increase doesn’t last at least ten years, it will be a pretty marginal investment.”

“In this year’s data, the answer is yes,” Mr Havrlant said.

“But again, there is variation across systems and regions, but under this year’s good conditions, that supplementary feeding costs are being minimised.”