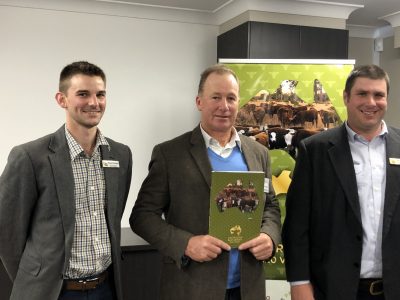 Australian Beef Report 2020 Vision co-authors Michael Wellington (left) and Ian McLean (right) from Bush Agribusiness with cattle producer Angus McGilvray from Womblebank, Mitchell, at the launch of the book in Toowoomba this morning.

THE “same wind blows on us all”, observes one of 27 experienced cattle producers who are quoted in the ‘pastoral panel’ section of the Australian Beef Report 2020 Vision, which was officially launched in Toowoomba this morning.

All cattle businesses face tough seasonal conditions, fluctuating prices and rising costs etc, the producer notes, yet “some forge ahead while others are left behind”. The Australian Beef Report 2020 Vision goes a long way toward answering that question, and makes it clear at the same time there are no inherent mysteries in the answer.

An unrelenting focus on the things that matter

So what separates the top performers?

The book says the answers are clear and remain “perennial and straight forward”:

– Have more productive herds which are more efficient at converting grass into beef, thus generating more income per animal unit;

A clear message is that the most profitable operations have scale and efficiency in common. Both factors are equally important: “an excess of one cannot fully compensate for the lack of the other” the report notes.

Attitude is another distinct point of difference. The top 25 percent of producers typically want to succeed and they “want to know how they are performing and how they can improve, they think critically, and have an unrelenting focus on the things that matter”. 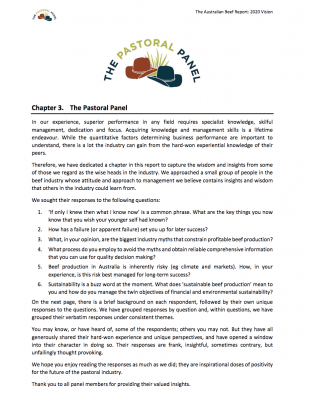 An extract from the Pastoral Panel chapter.

A standout feature of the book is a chapter called “The Pastoral Panel” which provides insights from 27 profitable producers from all over Australia (all of whom are identified in the book).

The chapter delves into their thoughts on questions such as what they know now that they wish their younger selves had known, what failures set them up for later success, and the myths they see that they believe constrain profitable production.

The questions also draw out their views on pathways to improvement, asking about the processes they use to make quality decisions, how they believe risk is best managed, where they find reliable information, and their advice on managing the twin objectives of achieving both financial and environmental sustainability.

The producers who would benefit from reading this book will not find a lecture in what they’re doing wrong. Rather they will find a multitude of relatable stories and tips, shared with disarming openness and honesty, from industry peers about what they have learned and what they now see as the most important things to focus on to achieve profitability and success in their cattle producing businesses.

Just one example is this story from a Central Queensland producer to explain how “knowledge has become our most valuable asset”:

“When our family business was split up I didn’t inherit a property. I got some cash and cattle but also the tax liability of whole lot of forced sales. Land values at the time were skyrocketing and it looked nearly impossible to get back into some land that was a living area. This forced (us) to learn a whole lot about finance, leverage and due diligence as we had to do whatever we could to get ahead. These lessons have been of immense value to us in recognising and grasping opportunities. We learnt that doing our homework (due diligence) really thoroughly allowed us to take much larger financial risks. The best part is that we can pass our learnings onto our teenage children. They will have the knowledge that we never got at their age. We feel very fortunate to have that knowledge to give them if we had simply inherited a property, we most likely would never have had the motivation and drive and the need to do what we did and most importantly to learn what we have. Knowledge has become our most valuable asset.”

A further chapter provides practical advice on managing the natural resource base. In addition to a diverse range of management advice it places a dollar value on native and improved pastures,  and guides to preparing robust grazing land management programs.

The same section provides evidence to show that overgrazing does not pay long term and that moderate stocking rates “won’t send you broke”. It also demonstrates how spectacular improvements to productive capacity have been achieved by producers prepared to persevere with long-term, consistent programs of pasture spelling and appropriate stocking rates.

The Australian Beef Report 2020 Vision also provides an in depth and up to date picture of the financial and production performance of family-owned beef businesses across Australia.

The analysis shows that many cattle operations in Australia lack the scale to be viable and profitable but highlights that the top 25 percent of producers in both northern and southern Australia are running profitable businesses, reinforcing the message that with adjustments to financial and grazing management, significant scope exists for many producers to increase their profitability.

A common theme among the top 25pc of producers is that they tend to operate bigger businesses with larger operating scale.

They also have more productive herds generating more income per animal unit, which compounds the benefit of scale. The Top 25 percent of businesses produce significantly more kilograms of beef per unit of production, at 96kg/Adult Equivalent (AE) in northern Australia compared to the average which is  87kg/AE, and 16.8 Dry Sheep Equivalent (DSE) in the south versus the average of 14.9kg/DSE.

The authors believe that to be viable, a standalone beef business (providing a full-time job for at least one owner) needs around 1000 head in southern Australian and around 2000 head in northern Australia. These are broad figures and will vary with individual regions.

“Under scale businesses can still be successful, and they should aspire to be, but the reality is that they will require off-farm work to supplement their household income,” the report says. “This is a perfectly acceptable, and encouraged strategy for smaller operations to address the scale constraint, yet still be able to pursue a rewarding agricultural venture.”

While many smaller producers accept this reality and address it effectively, the report warns against chasing “alchemic solutions”:

“Be they regenerative, holistic, niche marketing opportunities, or one of any number of other distractions masquerading as solutions, most of these are founded on the axiom ‘you will never go broke selling a farmer hope’, which is not a theory we subscribe to”.

The analysis also demonstrates that the business performance for most producers still relies heavily on occasional ‘high-tide’ years (high prices and/or good seasons). This is evidenced by the majority of industry profit over the last 12 years being made in the three financial years from 2016-2018 when beef prices were high.

Why ‘cost of production’ needs a better name

Dramatic differences can be found in the cost of production between the average production enterprise and the top performing businesses in both northern and southern Australia.

One point the report stresses is that managing cost of production is not about cutting spending.

The authors contend that while cost of production is an important measure, its naming is flawed because it tends to imply that costs need to be cut to improve it.

However, in many cases spending money to increase productivity may be the most effective way to reduce cost of production (i.e. such as through improving profit drivers such as herd productivity and labour efficiency which will lower cost of production. This may involve additional spending, provided that the spending results in incrementally more revenue).

Where is the best place in Australia to produce beef?

The report also breaks down business performance according to different beef producing regions across Australia, including maps showing which areas produce the strongest bottom line performance.

But it also illustrates that the Top 25 percent of producers in every area are running successful and profitable businesses, regardless of where they are located.

“While it is worth understanding the relative strengths and weaknesses of regions, the idea that one region is stronger than another is probably misguided,” the report notes.

“We think that energy is better spent aiming to leverage the inherent strengths and limit the weaknesses within a given region, rather than looking longingly over the fence.”

The long term reliance producers have had on capital gains in land for wealth creation has worked well for existing land owners over time, the report notes.

In contrast to ongoing claims that what the beef industry needs is additional capital, the authors argue that what is actually needed is improved returns on existing capital.

“We are of the opinion that more financial capital in the industry will do more harm than good, as the main effect will be an increase in land values without a corresponding increase in profits. We’d welcome a rational argument to the contrary.”