With recent rainfall across parts of eastern Australia, some potentially high quality hay which was on the ground may now be rain affected, reducing dry matter yields and nutritive value, while increasing the difficulty of getting the hay to the desired dry matter percentage. 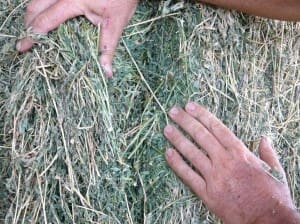 Unfortunately, there is now the possibility of mouldy hay developing, and an increased risk of spontaneous combustion, i.e. self-ignition of hay stacks.

Realising many of you may have read many articles on wet hay and haystack fires, it is worth refreshing farmers’ and contractors’ minds of the effects of baling up rain-affected hay.

After rain, hay is often baled slightly too wet due to many possible reasons including; incoming rain, moist ground under the windrow, possibly too much dew on forage at baling, poor curing weather, nodes and seed heads still wrapped in the flag leaf sheath not being cured enough, incorrectly calibrated or improperly used moisture meters, etc.

So there is potential for baling material that is, say two to five per cent moisture higher than it should be for the particular bale form.

Leaving wide windrows behind a mower-conditioner, tedding immediately after mowing (tedders will substantially speed up curing), and using a form of hay preservative are all essential tools to increase the curing rate of hay. Yes, these will add cost to the hay making but, especially if the material is reasonable to high quality, will be usually well worth the cost, if it helps to beat the next rain.

However, being practical, some hay will end up in the stack that has not been cured well enough.

Now, you’re into ‘watch and wait’ mode. Regularly monitor the stack from week one after baling for signs of heating. These are:

Unfortunately, much of the heating will occur in the stack centre which is difficult to pick up. To make matters worse, spontaneous combustion can be caused by one wet bale in the stack.

To try to get a handle on how hot the stack has become many farmers push a crowbar into the stack as far as possible.

After a couple of hours it is removed and felt for how hot it is. A rough guideline to the bar’s indication of stack temperature (degrees centigrade) is:

To measure temperatures further into the stack centre, use a steel pipe (~ 3 m long) of approximately 20 mm diameter. Drill eight to ten holes (4-5 mm diameter) drilled about 75 mm from the end, which has been flattened to allow the pipe to be pushed into the stack. A thermometer on string can then be lowered down and read regularly. Lay a plank or ladder across the top of the stack to walk on as there may be burnt out cavities in extremely hot stacks.

Another alternative for much more accurate, safer and easier monitoring, although much more costly, can be achieved by thermal couplings which can be placed into various areas of the stack at stacking and monitored very regularly.