THE first case of anthrax to occur this summer has been confirmed in NSW, prompting the state’s Department of Primary Industries and Local Land Services to urge producers to vaccinate at-risk livestock.

In late January, anthrax was detected in an unvaccinated mob of ewes and lambs on a property in the state’s Central West. The property had a previous history of anthrax. 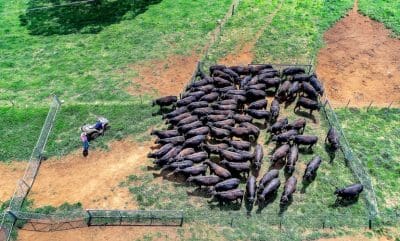 The affected animals were ewes which had not been vaccinated for anthrax and biosecurity measures at the affected property, including stock movement restrictions and the vaccination of remaining livestock were immediately imposed.

NSW DPI senior veterinary officer, Graham Bailey said while there were no general public health risks or trade implications from the detection, it served as a timely reminder.

Cases of anthrax in NSW tended to occur in a region which runs through the centre of the state, between Bourke and Moree in the north, to Albury and Deniliquin in the south, Dr Bailey said.

“Anthrax can be prevented by annual vaccination of cattle and sheep. Producers in high-risk locations are encouraged to consider vaccination,” he said.

Ingestion of soil by cattle, sheep and other ruminants was one of the key risk factors for anthrax, Dr Bailey said.

Other risk factors include a history of anthrax on the property, grazing stubble or very short pastures, low ground cover, deep cultivation or earthworks in paddocks, soil movement or exposure as a result of rain, contact with infected carcasses and alkaline soils which favour spore survival.

LLS Animal Biosecurity and Welfare business partner, Scott Ison, said farmers can apply to use the anthrax vaccine through their LLS district veterinarian.

“Once authorised, applicants can place an order for the vaccine with their local rural supplier or private veterinarian,” Dr Ison said.

Anthrax, a notifiable disease which must be reported immediately to the Emergency Animal Disease Hotline by calling 1800 675 888, is listed as prohibited matter under the NSW Biosecurity Act.

Information about preventing anthrax is available on the NSW DPI website, https://www.dpi.nsw.gov.au/biosecurity/animal/humans/anthrax or from LLS, 1300 795 299.