SOLID all-round performers that could tick the boxes in all performance categories, rather than stand-out entries in single trait, were the big winners at the 2019 Callide Dawson Carcase Competition decided in Biloela, Central Queensland on Friday night.

While the competition again produced some absolute outliers in feedlot weight gain performance, weight for age, carcase attributes, eating quality and yield, it was those solid all-rounders which produced the event’s major award winners.

Despite the prevailing drought, this year’s 31st annual Callide Dawson Carcase Competition attracted record entries of 783 head from 75 exhibitors, with 15 new breeders competing for the first time. A total of 534 head entered the pens in grainfed classes, with dry conditions forcing some cattle from grassfed competition into the grainfed section this year. Entries were drawn from across Central and western Queensland, the Wide Bay/Burnett region, Darling Downs and across the border into northern NSW.

Few, if any other carcase competitions in Australia could boast the broad genetic spectrum evident in the Callide Dawson entries. They ranged this year from straight Brahman and Brahman crosses from breeders further north to Indicus-based composites like Santas and Droughtmasters, British and European straightbreds and their crosses, and the occasional Sanga-derived Belmont Red entry.

An awards dinner in Biloela on Friday night brought together a producer and supporter audience of more than 200.

Event president Beau Surawski said the competition’s major winners over the years tended to be animals that were not necessarily the most eye-appealing, but which had no particular faults, and performed better than average across all the competition categories. And this year was no exception.

“Those cattle that are consistently good across all the fields, maybe finishing in the top 25 percent, are the ones that tend to pick up the overall awards,” Mr Surawski said.

He nominated the heifer entries as performing particularly well this year, given that breeders tended to retain their best heifers for breeding purposes, meaning competition heifers were often selected from the ‘rejects.’

Mr Surawski said in the grainfed classes, feedlot weightgain performance was back a little on last year, but for the February intake cattle, especially, they had faced a heatwave in March that slowed consumption rates and rate of gain. Storms at the time also contributed to oppressive conditions at the start of the program. “It was really 30-odd days before they could start hitting their straps,” he said.

He said the competition’s scoring framework had been altered a little this year to keep in line with industry and consumer expectations.

The grainfed cattle were again fed at Ian Hutchinson and family’s Warnoah feedlot near Theodore, with all cattle slaughtered at Teys Biloela.

The Warnoah ration was wheat/barley based, dry rolled, with the inclusion of some corn earlage for the first time this year. The 100-day cattle averaged 2.13kg/day average daily gain, and the 70-day domestic steers and heifers, 2.17kg/day.

Addressing the aards dinner audience on Friday, Teys Australia livestock general manager Geoff Teys said carcase competitions were really about the end consumer article – “It’s how the carcases grade with our estimated yield using the algorithm, and eventually with DEXA and perhaps CT scans; and using MSA, the best grading system in the world, on meat quality,” he said.

“We believe passionately that we have to further automate this industry, and we have a very good idea on how we will do this,” he said. “With the new installation at Lakes Creek, we can start this process. We don’t see a whole lot of opportunity for smarts in kill floor operations, but we do see very good automation technology coming in the deboning area, which is the most labour intensive part of the business,” he said.

“We think it will help us go forward in this industry – Australia is the most expensive processor in the world, and we have to arrest that. As an industry, we have to start working on how we can do it smarter and better,” he said.

This year’s grand champion carcase, bred from a South Devon bull out of a Brahmousin cow was bred and exhibited by James and Kath McUtchen and son Callum, Dixie, Jandowae. 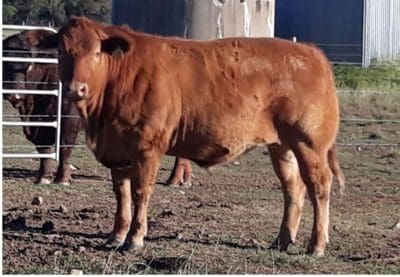 2019 Callide Dawson grand champion pictured on the hoof, before the competition started. Click on image for a larger view

The 22-month old milk-tooth steer, pictured here on the hoof, topped the competition’s grain-assisted steer/heifer class, and was 13 points ahead of the next highest scoring entry. He weighed 650kg liveweight at home before consignment, delivering weight for age points among the top few in his class, and dressing 372kg.

He had perfect fat depth and distribution, and an eye muscle area of 121sq cm – the largest of all 780 head in the competition, pushing his lean meat yield (using the Teys algorithm) towards the top of his class. To top it off, the steer produced the equal highest marbling pointscore in the competition, earning his grain-assist class’s highest MSA eating quality index points.

James McUtchen said he tended to run South Devon bulls over their Euro-type cows, and Belgian Blue bulls over British-type cows, to balance muscling with softness and doing-ability.

Most of the calves produced by the McUtchens are sold as weaners are sold off their mums, or taken through as butcher’s steers or sold for domestic feeding at around 300kg, depending on the season. Other champions and reserves

Reserve champion was a crossbred steer Robert and Melanie Leather from Biloela.

Overall most successful exhibitor was enthusiastic Murgon district beef producer and self-confessed carcase competition ‘junkie’ Mike Taylor, MK Cattle. His entries produced wins in the trade steer or heifer class, the grassfed heifer champion title mentioned above, and a string of seconds and thirds for grain-assisted steers/heifers, and export heifers.

Best liveweight gain in the feedlot winners this year included: