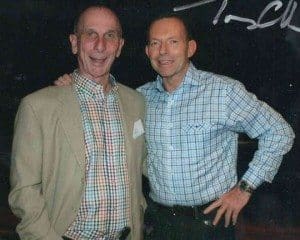 They say persistence pays off, and Townsville stock agent Tim McHugh’s efforts to convince the Federal Government to open army land to grazing for drought-affected cattle adds further weight to that adage.

Back in April Beef Central drew attention to Mr McHugh’s calls for former grazing properties Dotswood and Fanning River, now owned by the Department of Defence, to be made available for drought relief.

Since that time he has been quietly enlisting the help of parliamentarians including his local Federal member Ewen Jones, in whose seat of Herbert the properties, now part of the Townsville Field Training Area (TFTA), exist.

In June Mr Jones directed a question in the House of Representatives to Federal Defence Minister Kevin Andrew explaining Mr McHugh’s request and seeking advice on whether the Department would support the concept.

That was followed by a chance encounter during a function with the Prime Minister Tony Abbott a few weeks ago, where Mr McHugh seized the opportunity to suggest to the PM the idea of opening army owned land to drought affected cattle.

After initially being advised by the Australian Defence Force that cattle grazing and military exercises were unlikely to be compatible, the ongoing behind-the-scenes lobbying efforts now appear to have paid off.

Mr Jones announced this morning that Defence Minister Kevin Andrews has now given approval for local cattle producers to graze up to 10,000 cattle in the TFTA.

The Department of Defence has worked with the Queensland Department of Agriculture and Fisheries to jointly complete a Grazing Potential Assessment to determine what agistment options are available within the TFTA.

The Department of Agriculture and Fisheries’ report identifies three precincts that it deems could be made available to graziers. Graziers experiencing drought will now be able to apply for access to the area.

“l had many concerned graziers come to me asking if the defence land could be accessed to provide feed for their herds,” Mr Jones said.

“We’ve seen how tough many are doing it through the drought, so I’m pleased we’ve been able to make this happen for them.

“Of course this isn’t going to help every grazier who has been impacted by the drought in North Queensland, but I’m sure this will go a long way for many local graziers in the area. ”

Mr Jones thanked Defence Minister Kevin Andrews and Parliamentary Secretary for Defence Darren Chester, for their support for the use of TFTA under these circumstances.

The Defence Minister is currently working with Defence personnel to support the implementation of a process to assess graziers’ requests to access the suitable precincts within the TFTA.

Graziers are reminded that factors to be considered before access is granted include water, safety risks to personnel and cattle and internal fencing, Any offer to graziers to access TFTA will be affected Defence’s usage requirements for the area.

It seems unlikely Mr McHugh’s efforts will stop there. He estimates that Dotswood and Fanning River will enable grazing for around 10,000 cattle, but he also believes that the vast area of former long-term grazing properties now classified as state reserves and national parks in the area could collectively provide grazing for a further 200,000 cattle.

Sites like Blackbraes, in the basalt north of Hughenden, and Wairuna, closer to Mt Garnet were large-scale, successful North Queensland grazing properties until relatively recent times, when converted into national parks or state reserves.