Every five years the Australian Bureau of Statistics conducts a census of Australian farmers to gain a more accurate picture of the size and nature of Australia’s agricultural sector.

The results, released today, suggest the Australian beef cattle herd on June 30, 2016 (while released today the data is now one year old) stood at 22.3 million head.

Including the 2.6 million head of dairy cattle included in the census, the total number of cattle in Australia according to the census was 24.9 million.

The census figure is well below the level that both ABARES and Meat & Livestock Australia have pegged the cattle herd in recent years.

The census figure is one million head below ABARES’s estimate that there were 23.3 million beef cattle in Australia on 30 June 2016, or 26.1 million cattle in total including dairy herds.

Meat & Livestock Australia’s most recent beef projections report updated in April does not differentiate between beef and dairy cattle. It provides an overall estimate of total numbers. It’s estimate of the total herd as at 30 June 2016 is the 26.1m head, the same figure as ABARES. 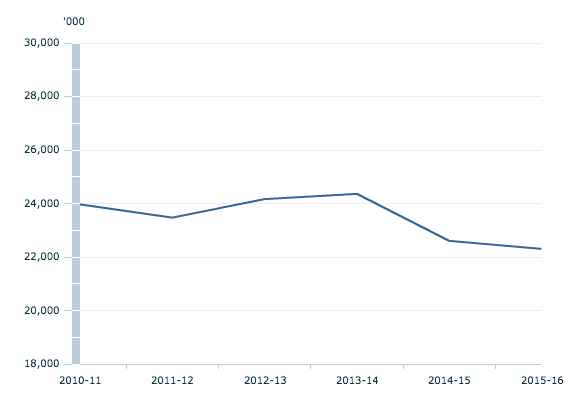 Total meat cattle numbers in Australia 2011-2016 according to ABS data.

Nationally, the the ABS says the national meat cattle herd fell by 1 per cent from 2014-5 to 2015-16, with small falls across most states, including a 12pc year-on-year decline in WA, offset by increases in the NT.

Good pasture conditions in Queensland late in 2015-16 led to an increase in heifers and calves offset by a decline in all ‘other beef cattle’. The Queensland beef cattle herd was 10,390,122 head at 30 June 2016.

Queensland’s contribution to the gross value (GV) of cattle and calves slaughtered in Australia accounts for 45% of the national total, followed by New South Wales which contributes 20%. By contrast ABARES’ most recent commodities report released in late June estimates that right now there are 24.2m beef cattle in Australia, and that number is expected to grow five percent to 25.5m on June 30, 2018 (or total a total figure of 28.2m including dairy cattle).