A NUMBER of northern family and company-scale beef enterprises have signalled their intention to move into walk-over weighing systems as part of a broader move to precision livestock management.

At the first boardmeeting last week of the new owners of S. Kidman and Co, Hancock Prospecting Group and Shanghai CRED took decisions to invest in walk-over weighing technology, which it said would benefit both staff and livestock. Some of the technology is already in use of Hancock Prospecting’s own northern cattle holdings. 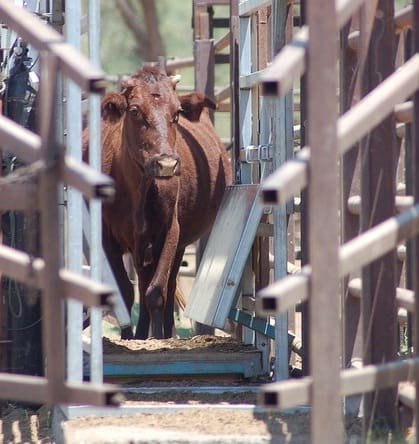 In remote, extensive locations, walk-over weighing systems set up on watering points direct cattle  over a set of scales before drinking, enabling their weights to remotely recorded. The system is potentially useful for separating calves of a certain weight from their mothers, or drafting steers reaching a desired liveweight for removal.

Prior to last week’s Kidman boardmeeting, Mrs Rinehart visited Kidman stations, speaking with the managers and sharing with them some of the new technological improvements occurring on the Hancock stations.

This increased investment in technology would involve more training and some cultural change at Kidman, the new owners said. Mrs Rinehart said the decisions were met with ‘great enthusiasm’ from many of the Kidman station managers.

He describes the Precision Pastoral Project in which he had been involved, including walk-over weighing, as ‘a real game-changer’ for extensive grazing enterprises in the north.

A project participant for the past three years, Mr Grey has trialled the walk-over-weighing unit in combination with the satellite imaging system that delivers information on pasture quality verified by animal performance.

“My calculations show this technology could save us upwards of $40,000 a year and the labour component is only a small part of that,” he said.

“The biggest gains come from minimising weight losses. The technology is a more accurate guide to what the country is capable of.”

Mr Grey, whose family has owned Glenflorrie for more than 20 years, said he was shocked at the differences between his visual assessments of livestock condition and pasture and the project data he was receiving.

“I drove down the road past a paddock with cattle in it and thought everything looked okay but the system said they were starting to lose weight,” he said.

“There was still a bulk of feed there but they couldn’t eat enough of it to maintain their bodyweight and my estimate of where they should have been was six weeks out.

“It really caught me on the hop because I hadn’t planned to move them that early.

“By the time I could, they had lost half to a full condition score, which cost us about $15,000. It taught me to be more flexible and to have somewhere to shift cattle to if we need to.”

By being able to access current, constant weight data, Mr Grey also discovered that his cattle lose, on average, 11kg/head when mustered out of the holding paddocks and walked 12km to the yards for drafting.

“That’s weighing them full and trying to look after them as much as we can,” he said. “They lose more weight walking back to paddock.”

Mr Grey said the additional auto-drafting function on the weighing platform could achieve some significant savings.

“By being able to program it to draft animals according to whatever parameters you want, businesses can avoid unnecessary weight losses caused by mustering unwanted animals and by disrupting the mob’s routine,” he said.

The system, which he refers to three or four times a week, also provides early warnings.

“If you’ve got fewer animals crossing the platform it may indicate missing cattle or deaths and, conversely, if there are more cattle crossing it than usual it may indicate animals have got into the paddock and fences need fixing,” he said.

So far, Mr Grey has trained three mobs, totalling about 700 head, to use the weighing platform as an access point to water. The training process usually took about 10 days.

“We start with a wide gap for cattle to access water and then gradually narrow it until they are happy to walk through the race and over the platform,” he said.

In the past three years only three animals have refused to use the platform and Murray said the simple solution was to shift them to another paddock.

Mr Grey can see huge potential for the project to expand its telemetry applications.

“Daily tank level monitoring, for example, could save on labour as well as reduce mortalities,” he said.