A BIOSECURITY risk exercise has indicated there could be a 42 percent probability of a significant animal disease outbreak in Australia in the next five years. 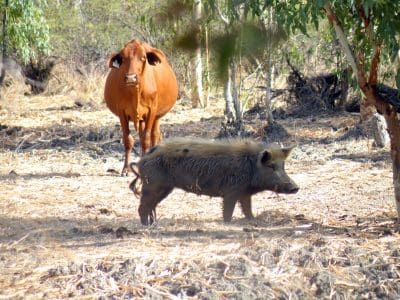 Participants in the SEJ session made private optimistic, pessimistic and ‘mostly likely’ projections of the probabilities of disease incursions, which were later aggregated.

“Estimates from the exercise suggest that there could be a 42pc probability of an internationally-notifiable incursion of any one of these significant exotic diseases in Australia in the next 5 years.”

Sheep Producers Australia chief executive officer Stephen Crisp attended the AHA session and said the SEJ exercise outcomes have highlighted the need to address biosecurity reform in the sheep and goat sector as soon as possible.

He said the messages from the AHA session provided a sobering commentary on the probabilities of Australia suffering an incursion of an internationally notifiable disease within the next five years.

“What was interesting for the sheep sector is Foot and Mouth Disease rating 9pc.

“For a disease that would literally shut the trade doors, have a massive impact on stock and their producers, costing tens of billions of dollars, that number seems worryingly high,” he said.

The information sheet (click link below to access) outlined factors that are working in favour and against Australia’s biosecurity interests.

“One of the negatives, over which we have some level of control, is Biosecurity Complacency or Fatigue,” Mr Crisp said.

“This is one of the many reasons SPA has been pushing for the recent SAFEMEAT recommendations on biosecurity reform to be followed through.

“Australia must have an ability to both defend our shores and quickly bounce back from an incursion, or we risk being shut out of international markets for an extended time if our fears are realised,” he said.

“The SAFEMEAT recommendations do need to be looked at as soon as possible, because it is not just SPA or any one of the livestock industries looking at this, it’s everyone who is involved, from the government departments who presented at Animal Health Australia …. everyone is looking at it, so yes, it needs to be addressed.”

The recommendations supported by SPA, from an NLIS (Sheep & Goats) traceability evaluation, and presented by SAFEMEAT to the National Biosecurity Committee (NBC) in early 2020 were:

Click this link to access the information sheet, outlining factors that are working in favour and against Australia’s biosecurity interests.